Moon and Winter Circle on March 21 and 22 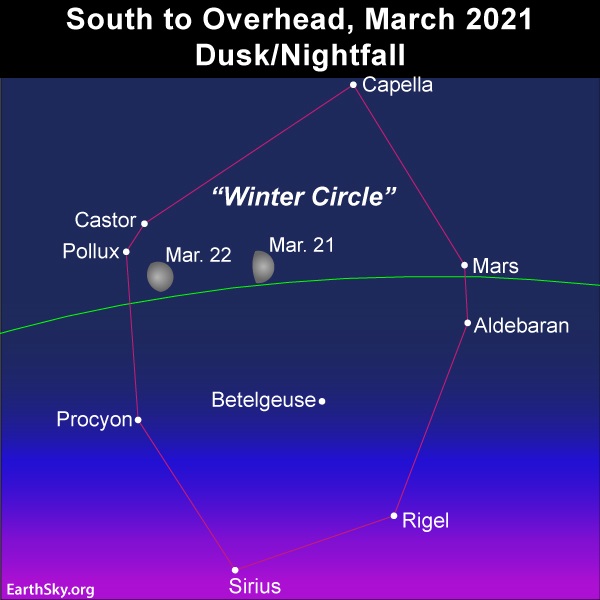 Now spring has arrived for the Northern Hemisphere (and autumn for the Southern Hemisphere). Yet – on March 21 and 22, 2021 – the waxing moon is moving inside a large circular (or hexagonal) star pattern, known as the Winter Circle (or Winter Hexagon). It’s not one of the 88 official constellations. It’s just a large, noticeable pattern of stars, an asterism. It consists of seven bright stars in six separate constellations. In March 2021, the red planet Mars makes up part of the Winter Circle too! The ecliptic – path of the sun, moon and planets, marked in green on our chart – cuts through the Winter Circle. So, during the months the Circle is visible, the moon spends a few days each month sweeping through these stars. The Winter Circle stars are:

With the exception of the star Castor in Gemini, the Winter Circle stars are what we call 1st-magnitude. That is, they’re the brightest stars in our sky. Technically speaking, Castor is slightly fainter at 2nd magnitude, though it’s the brightest of all the 2nd-magnitude stars in the sky.

Near the center of the Circle, you’ll find Orion’s bright red star Betelgeuse, which, in late 2019, began an unexpected dimming, causing some to suggest that it might be about to go supernova (explode). It did not explode, although its curious dimming continued into early 2020. The star then returned nearly to its original brightness, only to dim again in mid-2020. Now Betelgeuse is as bright as it ever was. Its strange dimming is thought to have been caused by a cloud of hot gas, released by the star, that temporarily blocked some of Betelgeuse’s light. Read more: Betelgeuse is smaller, closer, and won’t explode anytime soon

The Winter Circle (or Hexagon) contains another pattern known as the Winter Triangle. Image via SouledOut.org.

In the evenings in March, we in the Northern Hemisphere see the Winter Circle fill up much of our southern sky at nightfall. As viewed from the Southern Hemisphere – where it’s autumn now – the moon will also be in the midst of these same stars we view as the Winter Circle, but, as seen from temperate latitudes in the Southern Hemisphere, this lasso of stars appears upside-down relative to our northern view. That is, southern sky watchers will see the star Sirius at top and the star Capella at bottom.

By the way, the moon is now showing you where the sun resides (more or less) in front of the backdrop stars in the late June and July. So enjoy the Winter Circle in the month of March. And contemplate the sun being in this part of the sky when summer returns to the Northern Hemisphere! 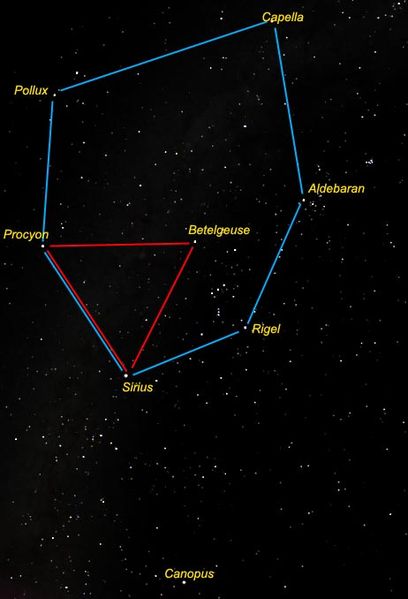 Bottom line: On March 21 and 22, 2021, the moon resides inside the Winter Circle, a large asterism made of seven brilliant stars.

Here are constellation charts via the International Astronomical Union (IAU)

Read more: Winter Circle, or Hexagon, made of bright stars