When will Betelgeuse explode?

The red supergiant star will explode in a supernova, close enough to shine brightly during the day but far enough away that Earth won’t be in danger. 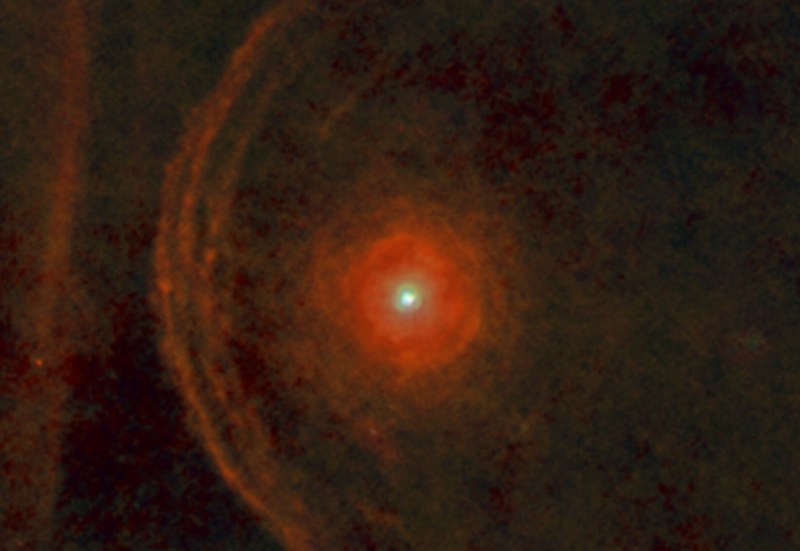 Multiple arcs were revealed around the old red star Betelgeuse in this 2013 far-infrared image from the Herschel Space Observatory. The arcs you see here are caused by winds from Betelgeuse crashing against the surrounding interstellar medium, creating a bow shock as the star moves through space. Image via ESA. Read more about this image.

Betelgeuse is the nearest red supergiant star to Earth. Someday it’ll explode as a supernova, but when? Just over a year ago, around September 2019, Betelgeuse sparked excitement around the world when it began dimming noticeably. The strange dimming of Betelgeuse caused some to believe the big event was close at hand. But Betelgeuse hasn’t exploded yet. This highly noticeable star in the constellation Orion the Hunter has since regained brightness, dimmed again, and brightened again, apparently now returning to a less active state. Clearly, though, more dimming could happen at any time.

Start watching Betelgeuse now, and you can keep an eye out for yourself. It’s easy to spot, as the second-brightest star in Orion, marking the Hunter’s right shoulder. Betelgeuse shines with a somber hue. It’s well-placed for viewing in the evening sky during the first couple of months of every year.

Betelgeuse is one of 2 very bright stars in the constellation Orion the Hunter. The other bright star is Rigel. Notice Betelgeuse and Rigel on either side of the short, straight row of 3 medium-bright stars. You’ll easily notice that row of stars – which represents Orion’s Belt – if you look in the evening sky in January or February. Betelgeuse is said to reside in the right shoulder of the Hunter.

Why did Betelgeuse suddenly dim? A statement from the Harvard Smithsonian Center for Astrophysics, released in August 2020, explained:

Between October and November 2019, Hubble Space Telescope observed dense, heated material moving outward through the star’s extended atmosphere at 200,000 miles per hour. The following month, several ground-based telescopes observed a decrease in brightness in Betelgeuse’s southern hemisphere, as if something was blocking light in this region of the star. By February 2020, the star had lost more than two-thirds of its brilliance, a dimming visible even to the unaided eye, creating buzz that the star might be going supernova.

With Hubble, we had previously observed hot convection cells on the surface of Betelgeuse and in the fall of 2019 we discovered a large amount of dense hot gas moving outwards through Betelgeuse’s extended atmosphere. We think this gas cooled down millions of miles outside the star to form the dust that blocked the southern part of the star imaged in January and February.

The material was two to four times more luminous than the star’s normal brightness. And then, about a month later the south part of Betelgeuse dimmed conspicuously as the star grew fainter.

We think it possible that a dark cloud resulted from the outflow that Hubble detected.

So the strange dimming of Betelgeuse was apparently caused by a cloud of hot gas, released by the star, that temporarily blocked some of the star’s light.

This artist’s concept shows how Betelgeuse belched a hot bubble of gas that then cooled into a dust cloud and temporarily blocked some of the star’s light from Earth’s point of view. Image via NASA/ ESA/ E. Wheatley (STScI).

Betelgeuse is going to explode … someday. Betelgeuse may lie as close as 430 light-years from Earth (although some estimates place it farther away; determining distances to red supergiant stars such as Betelgeuse is a vexing problem in astronomy). Betelgeuse is far away, yet it’s one of the brightest stars in Earth’s sky because it’s intrinsically very brilliant, some 100,000 times brighter than our own sun.

Such brilliance comes at a price. Betelgeuse’s enormous energy requires that its fuel be expended quickly, which hastens the end of its life. Someday “soon” the star will run out of fuel, collapse under its own weight, and then rebound in a spectacular supernova explosion. When this happens, Betelgeuse will brighten enormously for a few weeks or months, perhaps becoming as bright as the full moon, and be visible in broad daylight.

When will it happen? Probably not in our lifetimes. But, in fact, no one really knows. It could be tomorrow or a million years in the future.

Will Betelgeuse’s explosion cause destruction on Earth? No. Whenever Betelgeuse does blow up, our planet Earth is too far away for this explosion to harm, much less destroy, life on Earth. Astrophysicists say we’d have to be within 50 light-years of a supernova for it to harm us. Betelgeuse is nearly 10 times this distance.

Instead, anyone alive on Earth when it happens will be treated to an amazingly beautiful sight in the night sky – a very, very, very bright star.

Astronomers will be lucky to have Betelgeuse as close as it is so that they can study the star post-supernova. 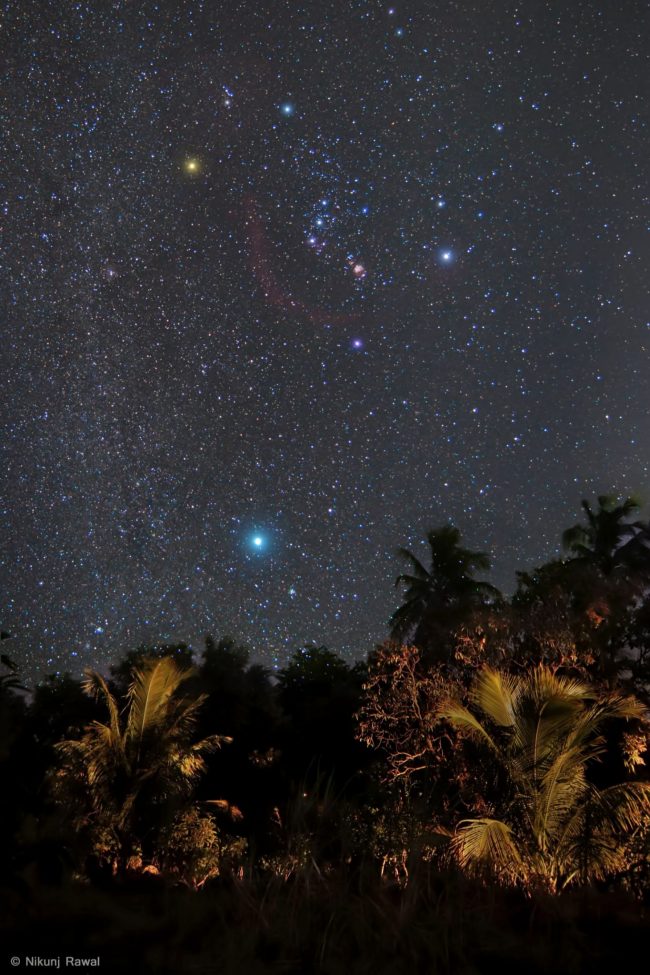 View at EarthSky Community Photos. | Betelgeuse is the bright red-orange star in the upper left of this photo by Nikunj Rawal, who captured it at Gir National Park in India on November 21, 2020. Nikunj wrote: “Orion the Hunter in the late night.” Thanks, Nikunj!

Betelgeuse in the night sky. At mid-northern latitudes, around the first of every year, Betelgeuse rises around sunset. The star is well placed for viewing on January and February evenings.

By the beginning of March, this star is due south in early evening. By mid-May, it can be glimpsed briefly in the west after sunset. Betelgeuse is traveling behind the sun in early summer, but it returns to the east before dawn by about mid-July.

The star Betelgeuse has a distinctive color: somber orange-red. It’s ideal for convincing non-believers that stars do, in fact, come in colors.

Stars designated as Alpha are typically brightest in their constellations. But Betelgeuse is Alpha Orionis, despite the fact that it’s fainter than Orion’s other bright star, Rigel. 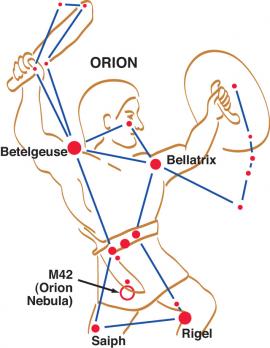 Betelgeuse is often said to represent the right shoulder of Orion the Hunter. Diagram via stardate.org.

Betelgeuse in pop culture, history and mythology. Remember the movie Beetlejuice? This star’s name is similar.

The proper names of many bright stars are Arabic in origin. This fact reflects the dominance of Arabic astronomers and astrologers during Europe’s Dark Ages. The name Betelgeuse is derived from an Arabic phrase that is usually translated as The Armpit of the Giant. Of course the Giant refers to Orion, but – rather than an armpit – some authors see Betelgeuse as representing a hand or sometimes a shoulder. While it is not entirely clear what the name means, in any event, Betelgeuse marks the right shoulder of Orion in many old star maps.

In the ancient myths, Orion is most often associated with a giant, a warrior, a hunter, a god or some other anthropomorphic or animal figure, so it is not surprising that most depictions of Betelgeuse have an anatomical connection. The Sanskrit name signified an arm, too, for example, although it likely was really the leg of a stag. In parts of Brazil, Betelgeuse was seen as the hind leg of a cayman (crocodilian) or the foreleg of a turtle. On the other hand, in ancient Japan, Betelgeuse was considered to be part of the rim of a ceremonial drum. In Peru, it was one of four vultures about to devour a criminal. 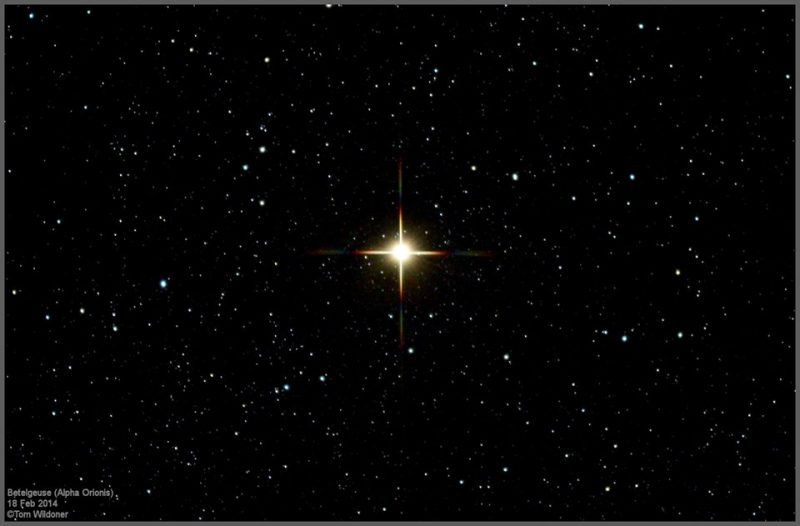 Red Betelgeuse, also known as Alpha Orionis, is the 10th-brightest star in the night sky and 2nd-brightest in the constellation of Orion. Photo by Tom Wildoner.

Bottom line: Betelgeuse is due to explode as a supernova someday, although maybe not soon on a human timescale. When it does explode, it’ll be bright enough from our earthly vantage point to shine during the day. But it’s far enough away that Earth won’t be in danger.