Rigel in Orion is blue-white

Rigel, brightest star in the easy-to-see constellation of Orion the Hunter, shines with a blue-white color. Hidden behind its brilliant classic beauty is a fascinating and complex stellar life history. 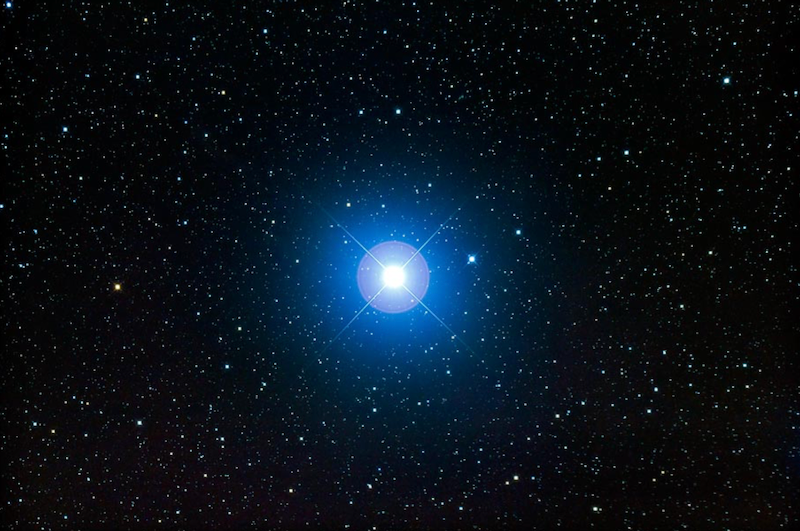 The blue-white star Rigel in the constellation Orion the Hunter, via Fred Espenak/ astropixels.com

In January, some of the brightest stars grace our night sky. Among them is Rigel, the brightest star in Orion the Hunter, one of the most recognizable of constellations. Rigel is much hotter and more massive than our sun. It’s in the latter stages of its stellar life. And hidden in its brilliance are fainter companion stars that can only be seen using large telescopes.

At magnitude 0.13, Rigel is the seventh-brightest star in the heavens, the fifth-brightest as viewed from North America. It can be found at a lower corner of Orion the Hunter, one of the sky’s best-known constellations. It’s easy to spot because of its brightness and also because of its distinctive blue-white color.

You can catch Orion in the east before dawn in late summer, but on January evenings, Orion shines prominently in the mid-evening sky. Look for Orion high in the south on northern winter (southern summer) evenings. By early March, as soon as the sun sets, Orion is at its highest in the sky. By early May, as seen from around the globe, Orion sets before the sky has a chance to get really dark.

To find Rigel, first look for its constellation, Orion. You’ll notice three stars in a short, straight line. These stars mark Orion’s Belt. An imaginary line in the sky drawn downward at a right or 90-degree angle from Orion’s Belt takes you to Rigel. (If you instead drew that line upward, you’d come to Betelgeuse, with a distinctive orangish tinge.)

Do not confuse Rigel with Sirius, which is farther to the east and farther south. Sirius is similar in appearance, but significantly brighter than Rigel. 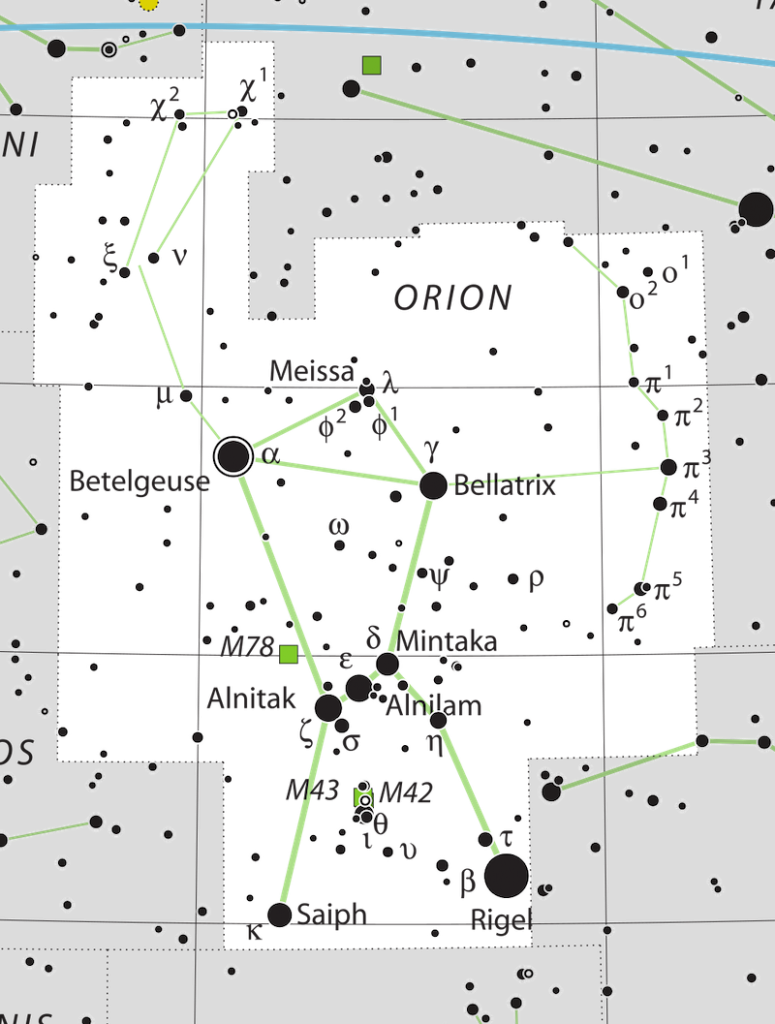 A map of Orion the Hunter, showing the location of Rigel. Image via IAU / Sky & Telescope magazine / Wikimedia Commons.

Counting all its radiation (not just visible light, but infrared, ultraviolet and so on), Rigel emits about 120,000 times more energy than the sun; this luminosity is calculated based on a distance of 863 light-years, a distance derived from data collected by the Hipparcos space telescope. With such enormous energy, you might be surprised to find that Rigel has only 21 times more mass, and is 79 times the diameter of our sun.

Rigel is a blue supergiant star, designated as type B8 Ia. According to stellar evolution theory, it is a massive star entering the latter part of its life, having exhausted most of the hydrogen fuel in its core. It’s also a variable star that shows slight irregular fluctuations in brightness. Someday, it will explode as a supernova.

Yet Rigel is not one of the galaxy’s largest stars, as the video below – from the European Southern Observatory – shows.

A little-known fact about Rigel: it is the largest star in a multiple star system. There is a close companion about 400 times fainter than Rigel. That “companion” is actually two stars that can only be resolved by large telescopes. And one of those two companion stars is what’s known as a spectroscopic binary: two stars so close they can be distinguished as two distinct entities only via spectroscopic observations.

In other words, the Rigel system has four known stars! 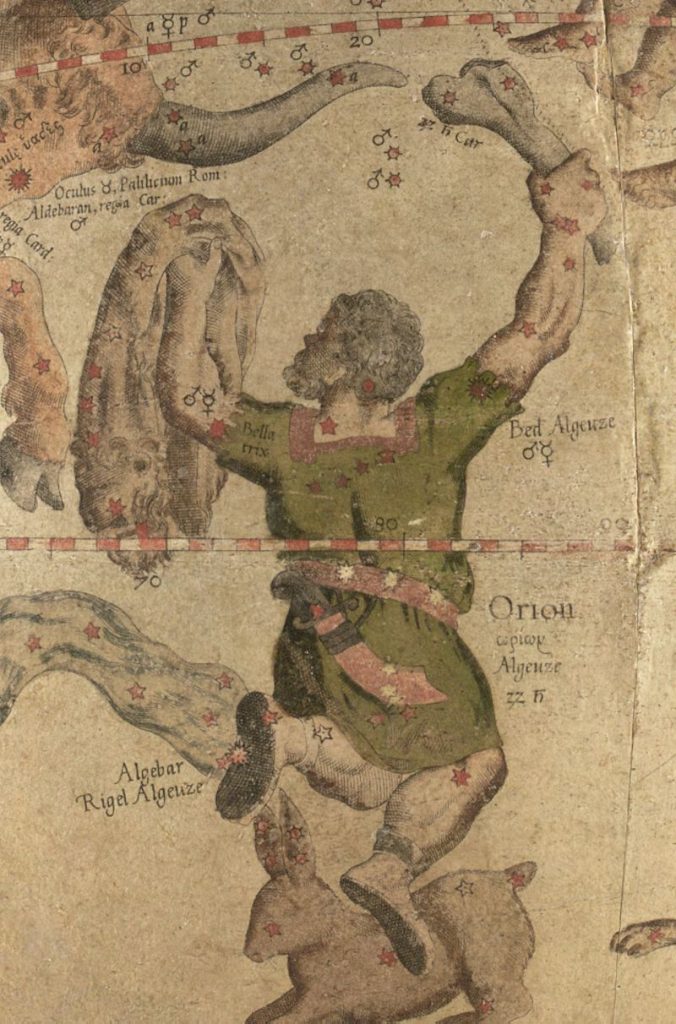 A depiction of Orion from the Mercator celestial globe, from the Harvard Map Collection. Rigel is labeled at its left foot. Gerardus Mercator was a 16th century geographer, cosmographer and cartographer from Rupelmonde, County of Flanders in modern-day Belgium. Image via Harvard University / Wikimedia Commons.

Rigel in history and mythology. Historically, the brightest star in a constellation receives the designation Alpha, the second-brightest is Beta, and so on. This system isn’t used for Orion’s star, however. Instead, the red star Betelgeuse is Alpha Orionis, and Rigel is Beta. But Rigel is the brighter star.

This deviation from standard stellar designations might be because Betelgeuse is a variable star and has been known to at least approach Rigel in brilliance. Rigel received the designation Beta Orionis from the German astronomer Johann Bayer in the early 1600s, who sought to systematize the naming conventions. It’s possible Betelgeuse actually was brighter around this time. Nowadays, Rigel outshines Betelgeuse.

The name Rigel comes from an Arabic phrase frequently translated as The Left Foot of the Central One. Although Orion was depicted as a giant or warrior in many cultures, in the original Arabic it might have been reference to a black sheep with a white spot or spots. Thus in the original form, Rigel might have designated the left foot of a sheep! Now, however, many people know it as the left foot of Orion the Hunter.

The mythology related to Rigel is sparse and unclear. Perhaps the most interesting connection is in Norse mythology, which sometimes identified Orion with Orwandil (also Orvandil, Aurvandil, Earendel and others). According to some, Orwandil was traveling with his companion, the god Thor, when his big toe froze in an unfortunate river-crossing incident. Thor broke off the frozen digit and threw it into the sky, where it became the star we see as Rigel. In some variations, Orwandil’s other big toe became faint Alcor in Ursa Major. 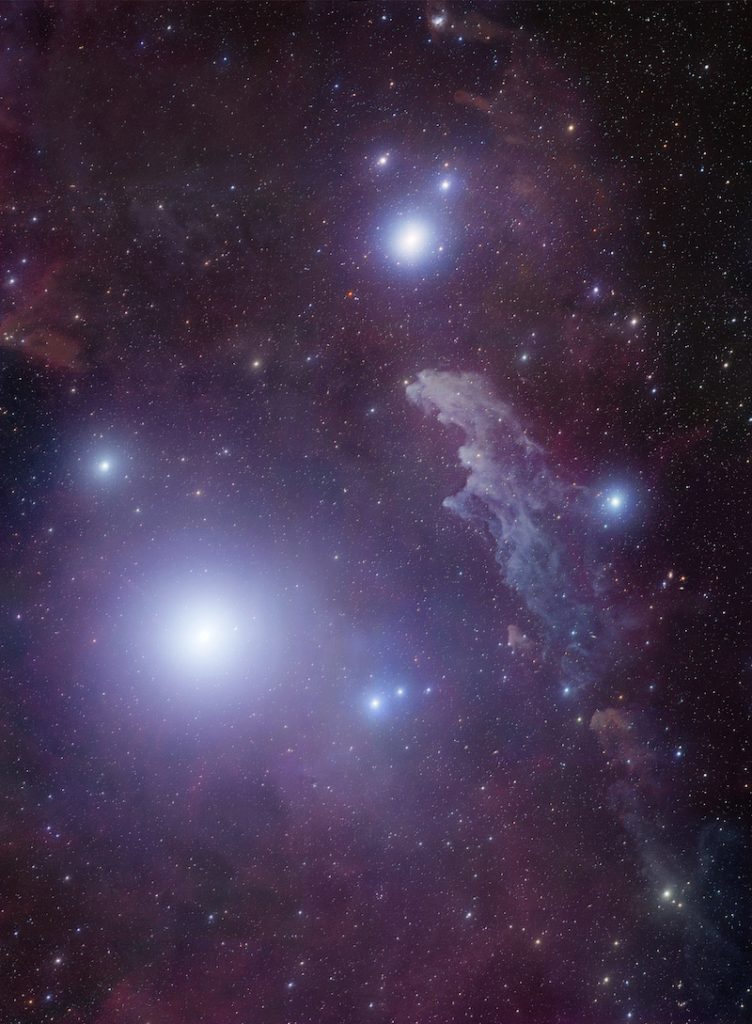 Rigel, the brightest star in Orion, and the witch head nebula (IC 2118) in Eridanus. Image via Robert Gendler / Wikimedia Commons.

Bottom line: The star Rigel in the constellation Orion the Hunter shines a brilliant bluish-white color in the Northern Hemisphere winter night sky. It’s considered Orion’s left foot. It’s much hotter and more massive than our sun. One day, Rigel will explode as a supernova.