Procyon is the Little Dog Star

The Dog Star, Sirius, is easy to spot because it’s the sky’s brightest star. Procyon – the other Dog Star – is near its brighter brother on the sky’s dome. 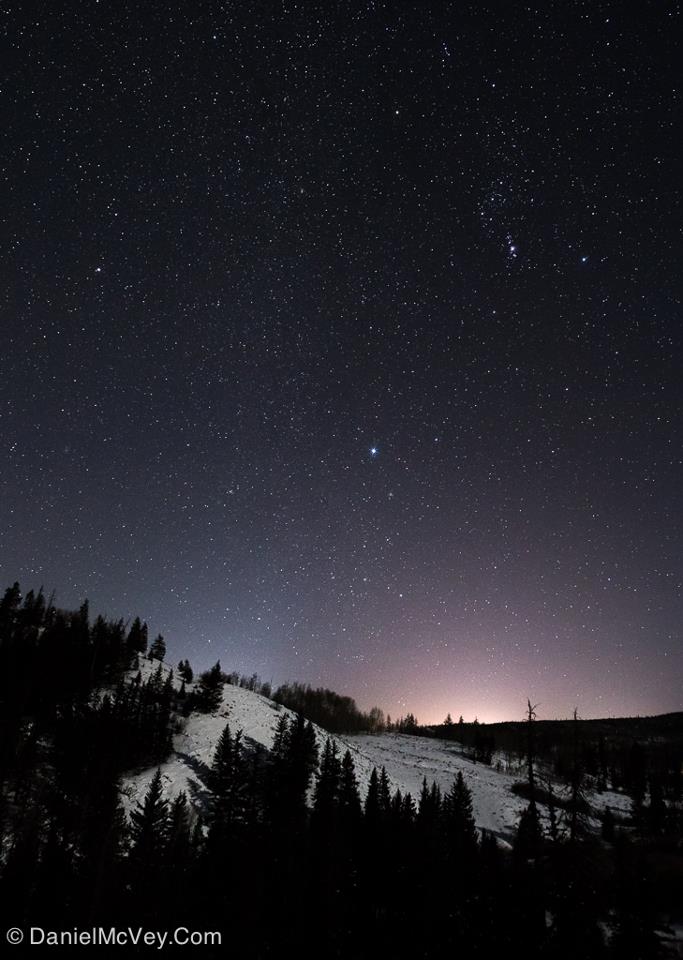 View larger. | Orion with his Dogs. The Dog Stars are Sirius in the constellation Canis Major, and Procyon in the constellation Canis Minor. In this photo, Orion is in the upper right. Notice that the 3 stars of Orion’s Belt point to the brightest star in this photo, Sirius. Procyon is the bright star on the far left of the photo. Procyon and Sirius make a large triangle with the bright star Betelgeuse in Orion. Photo taken by Daniel McVey over White River National Forest, Colorado.

It’s hard to think of Procyon – the Little Dog Star – without also thinking of the other Dog Star, Sirius. If you’re looking at the right time of year (or right time of night), you can always find Sirius because it’s the sky’s brightest star. Procyon is always near its brighter brother on the sky’s dome. Procyon isn’t nearly as bright as Sirius. It’s the eighth brightest star in the sky, and the sixth brightest of stars that are easily visible from the most populated regions of the Northern Hemisphere.

Look for Procyon in the evening in the winter and spring months. By March of every year, Procyon is at or near the meridian (highest point in the sky) at early evening. By June, Procyon sets not long after dark. 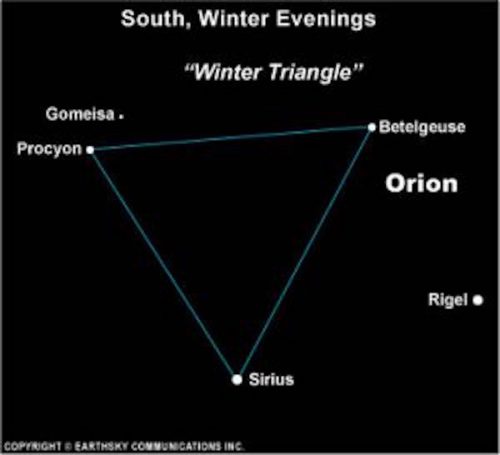 Procyon is easy to find on winter and spring evenings, in a large pattern made of 3 bright stars, known as the Winter Triangle.

Procyon is the brightest star in Canis Minor the Lesser Dog. This constellation is small, with only one other noteworthy star, named Gomeisa. Sometimes, Canis Minor is called the Hot Dog. Procyon is sometimes called the Lesser Dog Star or Little Dog Star. Our chart shows Procyon as a member of the Winter Triangle asterism. In other words, these stars are not a recognized constellation – just a group of noticeable stars that happen to form a triangle pattern on the sky’s dome.

Fainter than blue-white Sirius to its south, white Procyon is marginally brighter than orange-red Betelgeuse to the west. The best time to view Procyon is at evening in late winter through spring, when the Winter Triangle (Sirius, Procyon, Betelgeuse) is highest in the sky. At magnitude 0.4, Procyon is almost the same brightness as nearby Betelgeuse in Orion, with average magnitude 0.45. (Remember, in the magnitude system, larger numbers are fainter.) 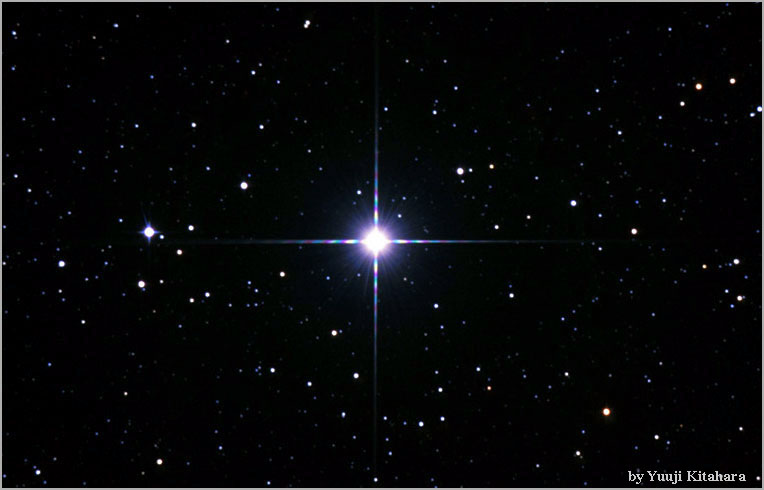 Procyon science. The star Procyon is nearing the end stages of its lifetime, evolving from a normal mature star to the inflated giant stages of old age.

Normal stars spend the large majority of their lifetimes converting hydrogen into helium. As the available hydrogen runs out, a star grows larger and its surface becomes cooler. Eventually Procyon will become a red giant star, much larger and brighter than the sun, but that is still some millions of years in the future.

Currently Procyon is designated as an F5IV-V star, where the F5 essentially gives the color or temperature of the star’s surface, and the IV-V means that it is in a transitional phase between the main sequence (V) and subdwarf (IV) periods.

Only 11.4 light-years away, Procyon is one of our nearest stellar neighbors. It is about 1.4 times as massive as the sun, and has roughly twice its diameter. Slightly more than seven times brighter than the sun, Procyon’s hotter surface (about 11,300 degrees F or 6,260 C, compared to about 10,000 degrees F or 5540 C for the sun) radiates more of the higher energy but shorter wavelengths of light. As such, it is nearly eight times more energetic (luminous) than the sun.

Procyon is a double star with a faint white dwarf companion that is not visible except in telescopes. The white dwarf, Procyon B, is farther along in its evolution than Procyon, and in fact has reached the end of the line. It no longer produces stable hydrogen fusion and is considered a “dead” star. The reasonable assumption is that these two stars formed at the same time, so the fact that Procyon B has already become a stellar corpse indicates that it originally must have been slightly more massive than Procyon. More massive stars tend to burn their fuel hotter and faster, causing them to burn out sooner. 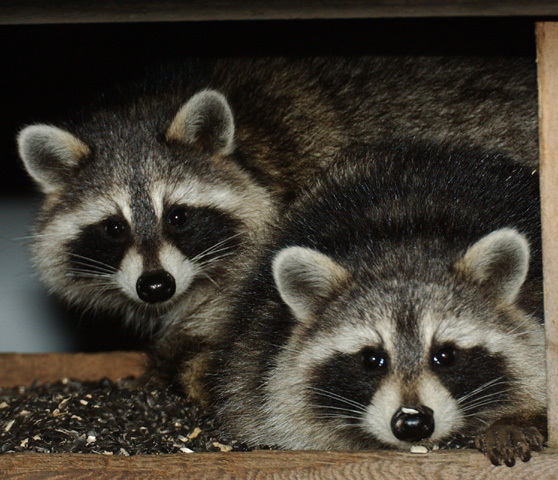 “Procyon” is also the genus designation of raccoons. Image via University of Michigan Museum of Zoology.

The name Procyon is from Greek and means “before the dog,” a reference to the rising of this star shortly before Sirius, the larger Dog Star in the constellation Canis Major. Procyon’s rising time was particularly important in ancient Egypt, because the helical rising – or rising just before the sun – of Sirius heralded the annual flooding of the Nile River. Thus the rising of Procyon just before Sirius gave even more advanced warning.

Procyon still does rise before Sirius as seen from mid-northern latitudes, like those in the northern United States.

But from the southern U.S. and similar latitudes – for example, Cairo in Egypt – Sirius now rises before Procyon! Thus an observer in Cairo today would find that Sirius rising a couple of minutes before Procyon and the reason for the name “before the dog” no longer applies. This change is due to a kind of long-term wobble in Earth’s motion, called precession.

An aside: “Procyon” is also the genus designation of raccoons. Apparently the “before the dog” appellation indicated that biologists once considered raccoons as the precursors of dogs in the evolutionary sequence – an idea no longer in favor.

Bottom line: The star Procyon is the Little Dog Star. How to find Procyon in your sky.