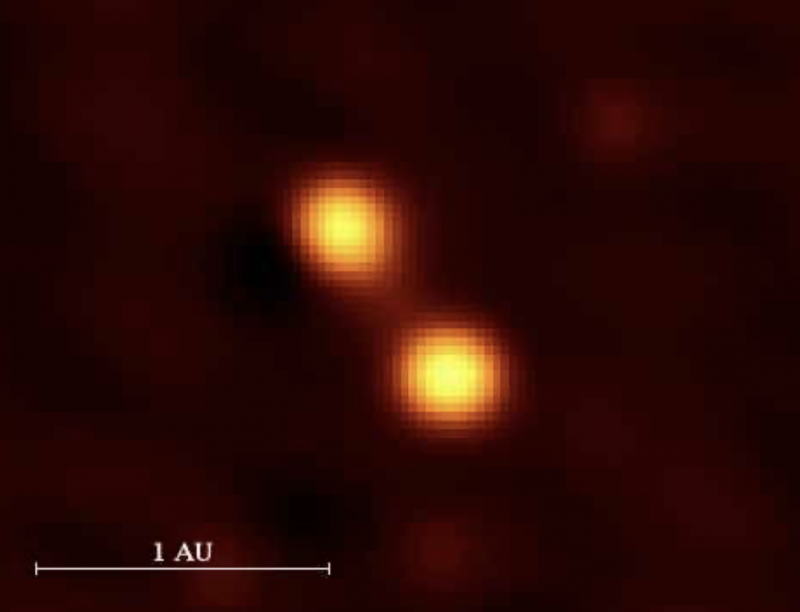 The Capella system consists of 2 close-orbiting yellow stars. Their orbital period is 104 days, not dissimilar from the orbit of Mercury, our sun’s innermost planet. This high-resolution image is from the Cambridge Optical Aperture Synthesis Telescope and the Atlas of the Universe.

The star Capella is prominent on Northern Hemisphere winter evenings. This star is also known as Alpha Aurigae because it’s the brightest point in the constellation Auriga the Charioteer. Plus, Capella is northernmost in the huge asterism, or star pattern, known as the Winter Hexagon. It’s the sixth-brightest star in our night sky (or seventh in all, if you count the sun).

It looks like one star, but it’s really two (and probably more) stars. More about the multiplicity of stars in the Capella system below.

Capella is the Latin word for nanny goat, and this bright star is often called the Goat Star.

The point of light we see as Capella looks distinctly golden. This star shares a spectral type – type G – with our sun. In fact, Capella is the biggest and brightest yellow star in our sky. It’s much bigger and brighter than our sun in absolute terms, and, of course, much farther away at about 42 light-years. That’s in contrast to our sun’s distance of 8 light-minutes.

If we were standing on a planet in the Capella system, would we gaze skyward toward a yellow star and feel homesick for our sun? 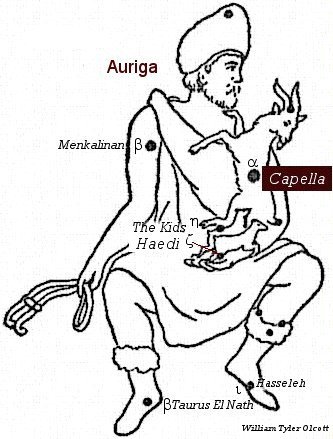 Capella, the Goat Star, is seen as a goat that the Charioteer carries on his shoulder. Notice the 2 baby goats at the larger goat’s feet. In the sky, 2 fainter stars – known as The Kids – denote them. Image via Constellationsofwords.com.

How to find Capella in the night sky. From mid-latitudes of the U.S. and Europe, Capella is far enough to the north to be seen at some time of the night all year round. For us in the Northern Hemisphere, it’s best in winter, when you’ll find golden Capella high overhead before bedtime. In the autumn, when Capella is lower near the northeastern horizon and appearing through a thick layer of Earth’s atmosphere, the star twinkles brightly, flashing colors of red, blue and green.

Capella is the brightest star in a five-sided pentagonal shape that makes up the constellation Auriga. The shape is difficult to reconcile with the idea of a man driving a chariot, but it’s a noticeable pattern and easy to find.

Here is the key to knowing you’ve found Capella. Near it, you’ll find a tiny asterism – a noticeable pattern on the sky’s dome – consisting of three fainter stars. This little triangle of stars is called The Kids, and it makes Capella instantly recognizable. 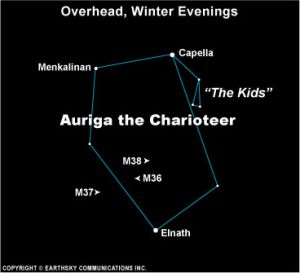 Look for Capella in the Northern Hemisphere winter. Also look for The Kids nearby.

Science of Capella. Like so many stars that appear single to the eye, Capella consists of more than one star. The primary star is said to be the A star. Various star catalogs have listed stars within a few arc minutes of Capella as companions, labeled as B, C, D, E, F, G, H, I, L, M, N, O, P, Q, and R. It’s not known for certain how many of these stars travel through space with Capella, or might have been born with it from a single cloud of gas and dust in space.

The A star in the Capella system is what’s called a spectroscopic binary. That is, sophisticated tools of astronomers are required to “split” the star, or recognize it as two stars. Both Capella Aa and Capella Ab, as they’re called, are roughly 10 times our sun’s diameter. They emit about 80 and 50 times more overall light than our sun, respectively. Casual observers will not be able to separate these stars through backyard telescopes.

Capella Aa and Ab are both yellow giant stars at the end of their normal lifetimes. Because each star is about 2 1/2 times more massive than our sun, the two components of Capella likely are also younger. This is because more massive stars have higher internal pressures, which causes them to burn their nuclear fuel faster and to have shorter lifespans. The two stars of Capella are in a transitional period from the smaller, hotter stars they once were, to the cooler and larger red giants they must ultimately become in their final phase. However, for now, their surface temperatures are similar to that of the sun, and so they share its spectral type of G.

Astronomers measure the combined magnitude of this system as 0.08. 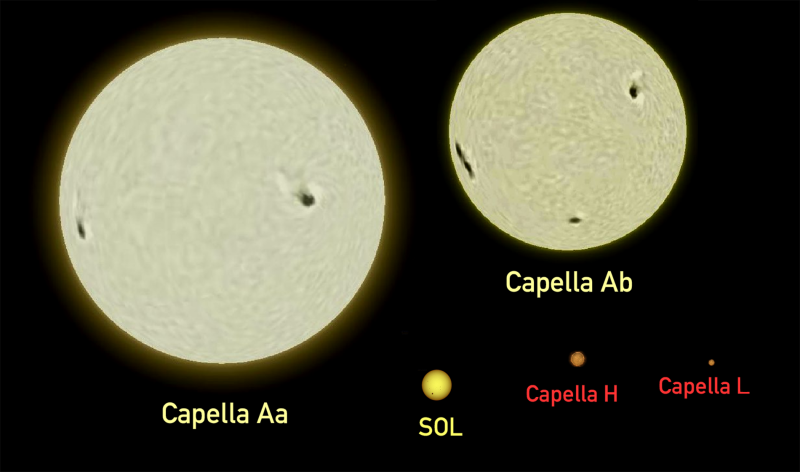 Artist’s concept of the 2 primary stars in the Capella system, known as Capella Aa and Capella Ab. They’re shown here with their sizes in contrast to our sun (labeled Sol in this image). Image via Wikimedia Commons.

Capella in history and mythology. For such a large constellation with such a bright star, the mythology of Auriga and Capella is sparse. The constellation has been associated with the Greek sea god Poseidon (the Roman god Neptune). Other stories say Auriga represents Erichthonius, the ancient lame king of Athens who invented the horse-drawn chariot.

Auriga seems to have been associated with shepherds and flocks, so the title of nanny goat – “she-goat” – for Capella is reasonable. However, neither Capella nor its constellation Auriga figures prominently in any major mythological stories from Greek or Roman culture.

Richard Hinkley Allen, in his famed Star Names, says that the ancient Arabs called the star Capella by a name that meant “The Driver” and implies that this star was seen as a shepherd driving a flock across the sky. The flock might have been the nearby star cluster the Pleiades, although – instead of sheep or goats – early Arabian stargazers saw this pattern composed of camels. Capella was also apparently important in ancient Egypt. It appears on the Dendera Zodiac as a mummified cat.

In China, Capella and four other stars of Auriga were known as the Five Chariots. The other four stars are Auriga’s Beta, Theta, Kappa and Gamma (El Nath, which is now Beta Tauri). 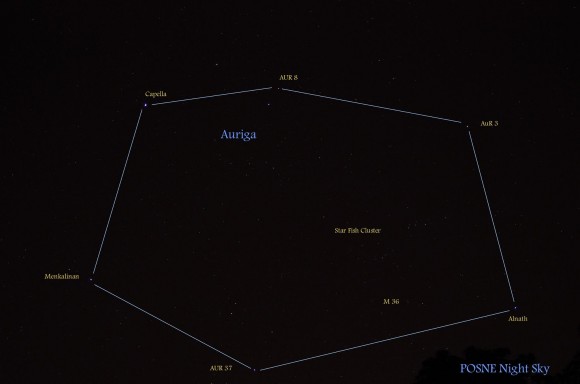