How to see Auriga the Charioteer 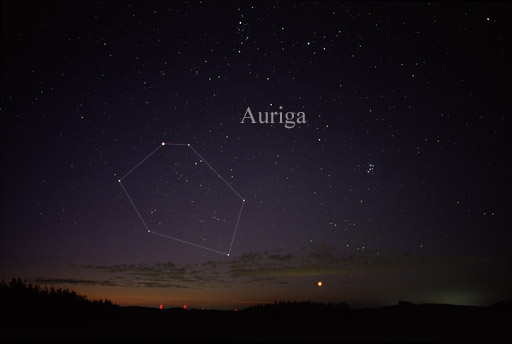 The constellation Auriga as it can be seen by the naked eye. Image via Till Credner.

An asterism called The Kids

Other stars in Auriga 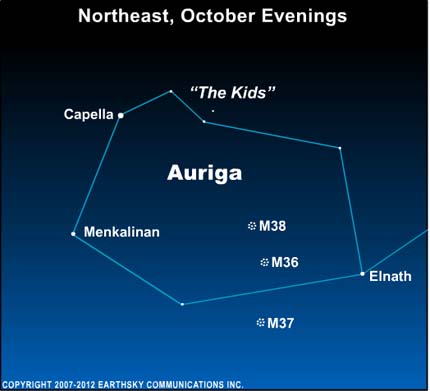 Auriga is easy to spot as a large, 5-sided figure

The bright star Capella. Auriga’s brightest star is called Capella. It’s a golden star, somewhat similar to our sun. In fact, if you could get some distance away from our solar system – light-years away – you might see our sun much as we see Capella. Capella is located at one corner of the constellation Auriga. Capella marks the Charioteer’s left shoulder.

An asterism called The Kids. If you’re unsure whether you’ve identified Capella, you can always look nearby for a small triangle of stars. Capella is sometimes called the Goat Star, and this little triangle is known as The Kids.

Other stars in Auriga. Menkalinan, the second-brightest star in Auriga, marks the Charioteer’s right shoulder. Also, notice the star Elnath at the southern tip of Auriga. This star used to belong both to Auriga, where it was known as the heel of the Charioteer, and to the constellation Taurus, where it represented the tip of the Bull’s northern horn. In the last century, though, the International Astronomical Union decreed that this star shall belong only to Taurus!

Star clusters in Auriga. In a dark sky, using binoculars, you can spot some easy-to-see star clusters within Auriga: M36, M37 and M38. 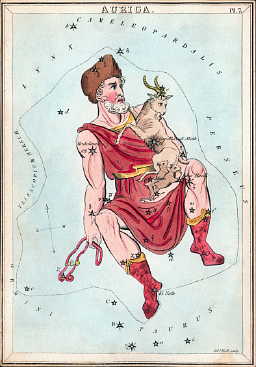 Auriga carrying the goat and kids depicted in Urania's Mirror, a set of constellation cards published in London c.1825. Via Wikipedia

This constellation and its brightest star Capella – and all that Auriga has to offer – are easy to identify in the northeast by mid to late evening. If you don’t see them, try looking a bit later at night – especially if you live in the southern U.S. 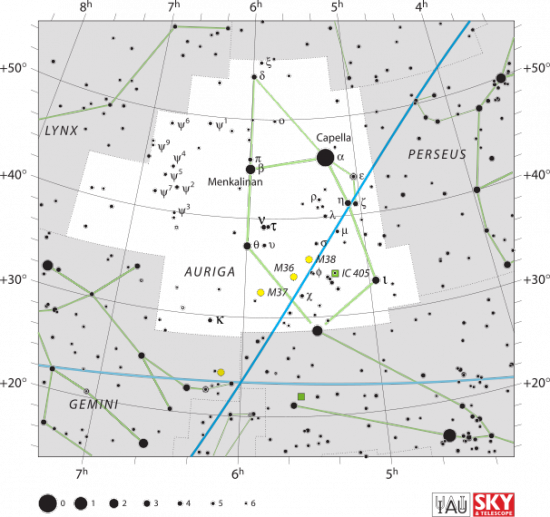 Auriga, via the International Astronomical Union

Bottom line: From the Northern Hemisphere latitudes, look for the beautiful star Capella and its constellation Auriga the Charioteer.