The red supergiant star Betelgeuse, a bright star in the constellation of Orion, has been making headlines due to a recent drop in brightness. Is an explosion imminent? If it happens, will Earth be affected? 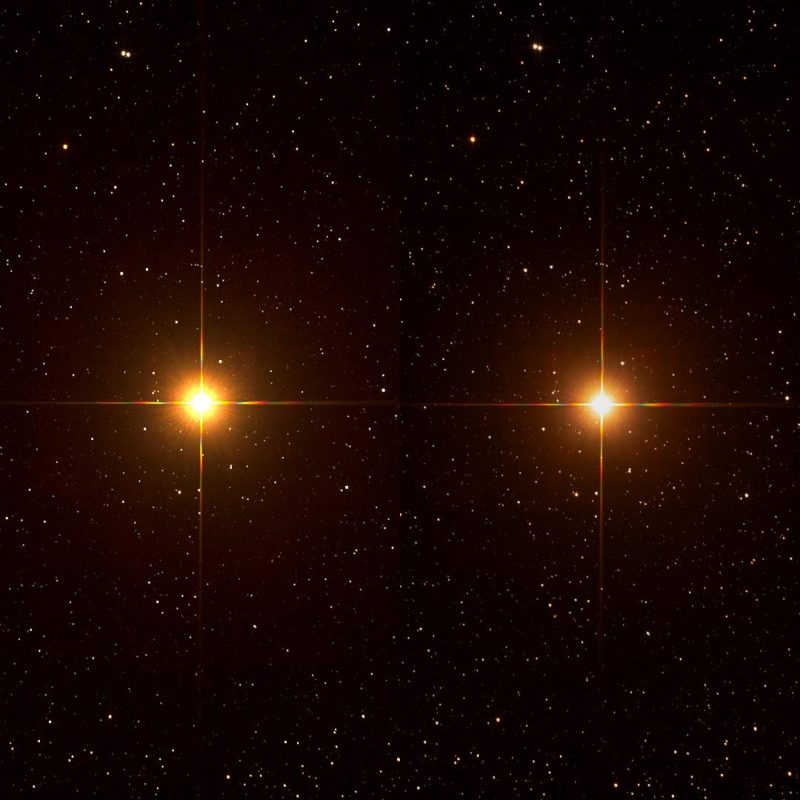 View at EarthSky Community Photos. | Brian Ottum kindly provided this direct comparison of Betelgeuse a few years ago and Betelgeuse now. He wrote: “Left is February 2016. Right is December 31, 2019. Note that the brightness/appearance of all background stars are identical left versus right, but Betelgeuse is definitely fainter on the right.” Thank you, Brian!

Why is the red supergiant star Betelgeuse in the news?

Beginning in October 2019, astronomers noticed that the brightness of Betelgeuse suddenly began to change. The star was dimming. Once one of the top 10 brightest stars in the sky, its brightness had fallen to 21st place by the end of December 2019. Wild claims have been made about this sudden dimming of Betelgeuse, and many misconceptions spread. Some media outlets claimed the dimming was evidence that the star was about to go supernova, ending its life in a spectacular explosion. Is that possible? And if Betelgeuse did go supernova, how would that affect Earth?

Betelgeuse, pronounced “BET-tal-joos”, is a red supergiant star, located an estimated 642 light-years away. It’s the alpha star – that is the brightest star – of the constellation Orion the Hunter, which is a very prominent constellation in the sky at this time of year. Betelgeuse represents Orion’s left shoulder. It’s a distinctly red-colored star. Betelgeuse has an estimated diameter of 767 million miles (about 1.2 billion km), as befits a red supergiant star. It has an estimated mass nearly 12 times that of our sun. The star is estimated to be between nine and ten million years old, in contrast to our sun’s age of about 4.5 billion years. Yet our sun is only middle-aged, while Betelgeuse is nearing the end of its life. That’s because the massive supergiant stars, like Betelgeuse, burn their thermonuclear fuel more quickly that medium-sized stars like our sun. 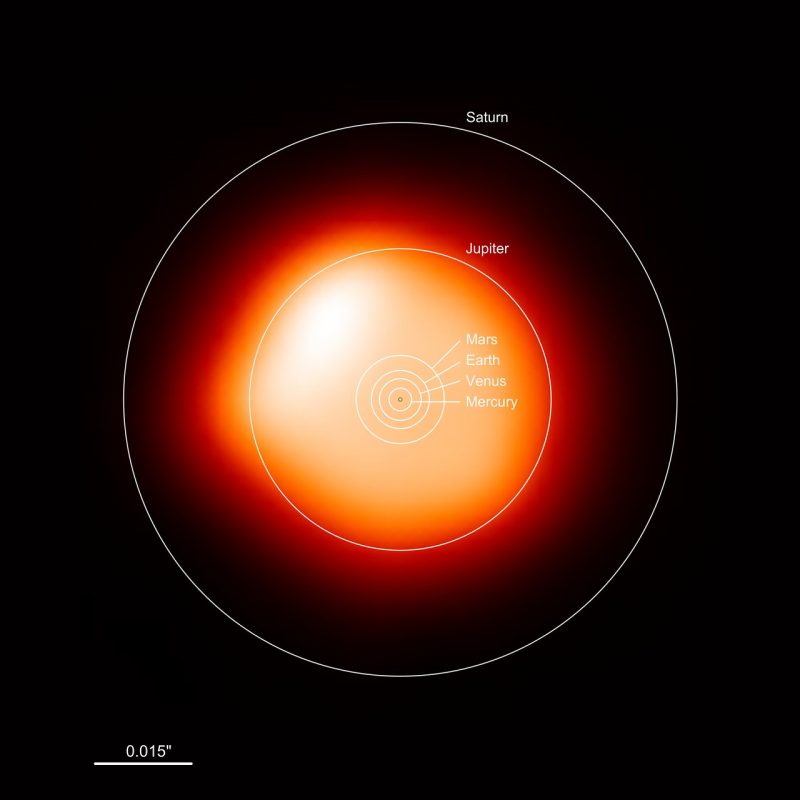 This image, made with the Atacama Large Millimeter/submillimeter Array (ALMA), shows the red supergiant Betelgeuse, one of the largest stars known. In the millimeter part of the spectrum the star is around 1,400 times larger than our sun. The overlaid annotation shows how large the star is compared to our solar system. Betelgeuse would engulf all four terrestrial planets — Mercury, Venus, Earth and Mars — and even the gas giant Jupiter. Only Saturn would be beyond its surface. Image via ESO.

Is Betelgeuse’ dimming unusual? Will the star go supernova?

The dimming of Betelgeuse is not unusual per se. It has been known for a long time that Betelgeuse is a variable star, that is to say one whose brightness fluctuates over time. The star has been found to have multiple cycles of dimming: a 5.9-year main cycle and, within that, several smaller ones. It’s conceivable that – when the minima of all the cycles come together – the star could look exceptionally faint, as it does now.

And there are other possibilities. Astronomers have also suggested that the change in brightness could be due to some sort of eruption of gas or dust, or changes in the star’s surface brightness.

So will Betelgeuse go supernova? Yes! But probably not in our lifetimes. Current understanding is that all supergiants, be they red or blue, end their lives as supernovae. However, in the case of Betelgeuse, this event is predicted to happen anytime within the next few hundred thousand years.

Most astronomers do not believe a supernova is imminent. For example, astronomers Richard Wasatonic and Edward Guinan, of Villanova University, postulate that the current dimming is due to an unusually extreme 425-day dimming cycle within the main 5.9-year one. Unusual, certainly, but nothing that indicates an imminent explosion.

The other thing to remember is that there is no precedent, in astronomy’s history of observing supernovae, for the end of a supergiant star’s life to be preceded by a dimming of its light. Such a phenomenon has not been observed, although it cannot be ruled out. But certainly there is nothing in the computer models of supernovae to indicate the existence of a dimming phase before the explosion.

It must be said, however, that predicting supernovae is very much an inexact science, so there is still a possibility, however remote, that Betelguese’s fiery end could indeed happen tomorrow. Or, to be more exact, it happened 642 years ago and the light from it is about to reach the Earth.

Just had a look at #Betelgeuse a few days ago seemed similar or just a little fraction brighter than Bellatrix, though in moonlight it seemed a bit brighter? circa ~1.4m. I will wait until the moon has moved away in a week or so then will look again.

If Betelgeuse did go supernova, is the Earth in any danger?

No. Our planet is simply too far away from Betelgeuse for the supernova to present any danger whatsoever. It will have absolutely no effect on the solar system. Stories you might have read in the media, about our planet being in danger, are just hype.

Astronomers believe the dimming cycle will end soon and Betelgeuse will return to its former glory. As its brightness increases, it is certain that the stories in the media about the star will fade and this episode will swiftly be forgotten.

However, one day Betelgeuse will explode and give us an amazing celestial show. It’ll be brighter in our sky than a full moon, and possibly visible in daytime!

This is what the star Betelgeuse exploding would look like from Earth.

Bottom line: Questions and answers about the recent dimming of the star Betelgeuse.