About two thousand years from now, Gamma Cephei, an inconspicuous star in the constellation Cepheus, will become our North Star.

An image of Gamma Cephei, taken at Palomar Observatory in the visible band. Image via Digital Sky Survey / Mikulski Archive.

Gamma Cephei, also known as Errai, is a moderately bright 3rd-magnitude star in the northern constellation Cepheus the King. To many stargazers, the constellation looks like a child’s depiction of a house, with Gamma Cephei marking the peak of the roof. This fascinating star has played a major role in our understanding of exoplanets, especially in multiple star systems.

Interestingly, by 4,000 CE, Gamma Cephei will move into position – due to the Earth’s axial precession – to become our North Star. 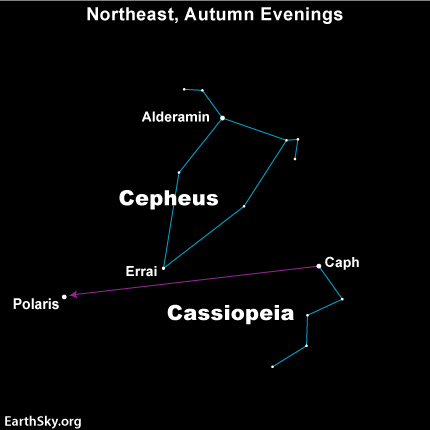 Cepheus can be found in the northern sky. It looks very much like a child’s drawing of a house. The star Gamma Cephei, or Errai, marks the peak of the roof of the house.

How to find Gamma Cephei

For most northern latitudes in the Northern Hemisphere, orange-yellow Gamma Cephei shines as a circumpolar star. Circumpolar stars are stars that neither rise nor set, but always appear above the horizon.

Do you know the W-shaped constellation Cassiopeia? It’s visible in northern fall and early winter evenings from northerly latitudes. If so, draw an imaginary line between the star Caph, at one end of the W, toward Polaris, our present-day North Star. Gamma Cephei is about 2/3 of the way along that line, located very slightly westward of it.

Think of it this way. Cepheus the King is not a particularly prominent constellation, but you’ll know that you’ve found Cepheus, because you’ll see his more striking wife – the W-shaped constellation Cassiopeia the Queen – standing at his side.

Another way to find Gamma Cephei, on spring and summer evenings, is to use the familiar Big Dipper asterism. The two outer stars in the Dipper’s bowl are Merak and Dubhe, sometimes called the Pointers, because a line between them extended northward points to Polaris. Then jump one fist-width – held at arm’s length – beyond Polaris to Gamma Cephei.

The Earth’s north rotation axis points to the north celestial pole, which is very close to Polaris, our present North Star. However, a motion of Earth known as axial precession changes the north and south celestial poles’ locations with respect to the stars, tracing a circle in the sky of their respective celestial hemispheres approximately every 26,000 years (the exact value of the axial precession period is not known).

Polaris will continue to reign as the North Star for several more centuries. Axial precession will gradually move the celestial poles in the sky. Gamma Cephei stands next in line to inherit the North Star title on around 4,000 CE.

As axial precession continue to trace a circle, other stars will take over the mantle of North Star. Around 7,500 CE, Alderamin – Cepheus’ brightest star – will become the North Star. And ultimately, of course, in about 26,000 years, the circle traced out by axial precession will return to Polaris.

The circular path of the north celestial pole (in orange), due to axial precession, relative to the stars. Over the course of about 26,000 years, the Earth’s rotational axis, projected onto the sky, will trace a circle in northern and southern skies. Positive numbers in yellow show dates in CE (Common Era) where the north celestial pole will be located relative to the stars. Negative numbers in yellow represent BCE (Before Common Era) dates. Polaris is shown near the top of the circle at 2,000 CE, our current time. Image via Tau’olunga / Wikimedia Commons.

Gamma Cephei is about 45 light-years away from us. It’s a binary star, with two stars revolving around a common center of mass every 67 years. The larger star, about 1.4 times the mass of our sun, is an ordinary main sequence star, somewhat similar to our sun. The small star, less than half our sun’s mass, is a red dwarf star.

In 2002, astronomers, using a telescope at McDonald Observatory, found evidence of a planet for Gamma Cephei; it was the first case of a planet orbiting a star in a close-in binary star system. The planet, named Tadmor, has a rotation period of about two years around the bigger star in this binary system. This discovery has implications for the number of possible planets in our galaxy, because, unlike our sun, most stars are in multiple systems. However, planets in multiple systems have their own inherent challenges. For example, some orbits for planets in multiple star systems are not possible for dynamical reasons; a planet could be ejected from the system or transferred to a more inner or outer orbit. 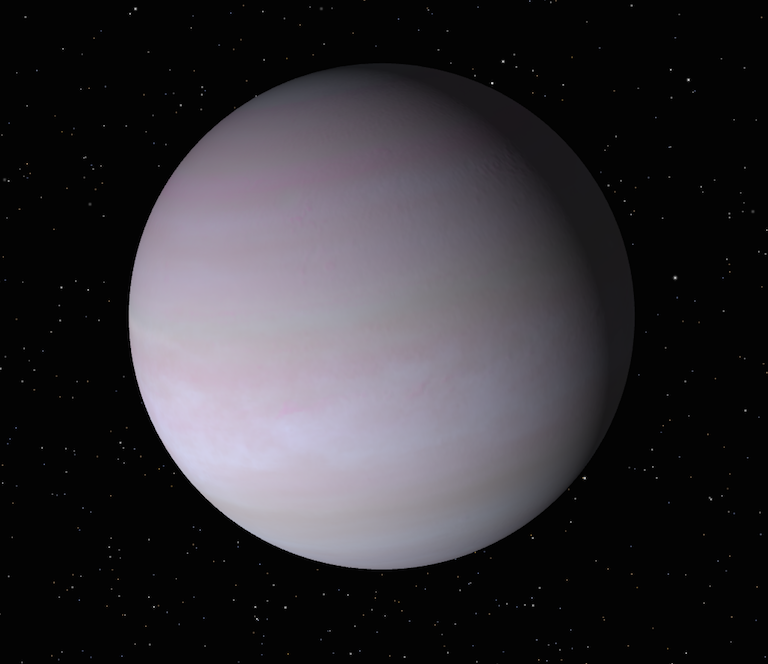 An artist’s concept of Tadmor, the planet that was discovered in the Gamma Cephei binary system in 2002. Image via NASA. 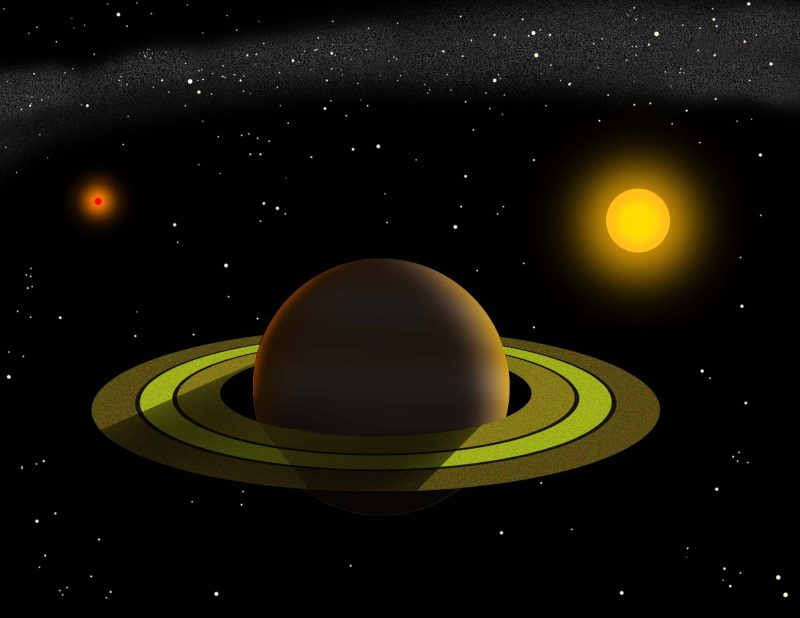 Another artist’s conception of the exoplanet in the Gamma Cephei system. Image via Tim Jones/ McDonald Observatory.

Bottom line: Gamma Cephei, also known as Errai , is a binary star system with at least one planet. Someday, it will be Earth’s North Star.