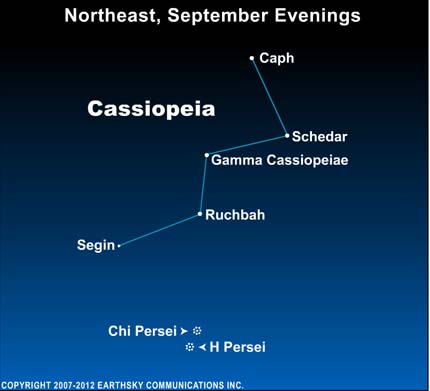 Tonight – or any autumn evening – Cassiopeia the Queen can be found in the northeast after sunset. The shape of this constellation makes Cassiopeia’s stars very noticeable. It has the distinctive shape of a W, or M, depending on the time of night you see it.

Look for the Queen starting at nightfall or early evening. Depending on how far north you are, Cassiopeia may set as night passes, then rise again in the hours before sunrise. For those in the northern U.S. and Canada, Cassiopeia is circumpolar, above the horizon all night long.

Cassiopeia represents an ancient queen of Ethiopia. The entire constellation is sometimes also called Cassiopeia’s Chair, and some old star maps depict the queen sitting on the chair, marked by the five brightest stars of this constellation. These stars are Schedar, Caph, Gamma Cassiopeiae, Ruchbah and Segin.

If you have a dark sky, you can look below Cassiopeia in the northeast on these autumn evenings for a famous binocular object. This object is called the Double Cluster in Perseus. These are open star clusters, each of which consists of young stars still moving together from the primordial cloud of gas and dust that gave birth to the cluster’s stars. These clusters are familiarly known to stargazers as H and Chi Persei.

Stargazers smile when they peer at them through their binoculars, not only because they are beautiful, but also because of their names. They are named from two different alphabets, the Greek and the Roman. Stars have Greek letter names, but most star clusters don’t. Johann Bayer (1572-1625) gave Chi Persei – the cluster on the top – its Greek letter name. Then, it’s said, he ran out of Greek letters. That’s when he used a Roman letter – the letter H – to name the other cluster.

After midnight, Cassiopeia swings above Polaris, the North Star. Before dawn, she is found in the northwest. But during the evening hours, Queen Cassiopeia lights up the northeast sky.

Bottom line: The constellation Cassiopeia the Queen has the distinct shape of a W or M. Find her in the north-northeast sky on September and October evenings.

Help support EarthSky! Visit the EarthSky store to see the great selection of educational tools and team gear we have to offer.