Orange-hued Schedar is the brightest star in the distinctive W-shaped northern constellation Cassiopeia the Queen. 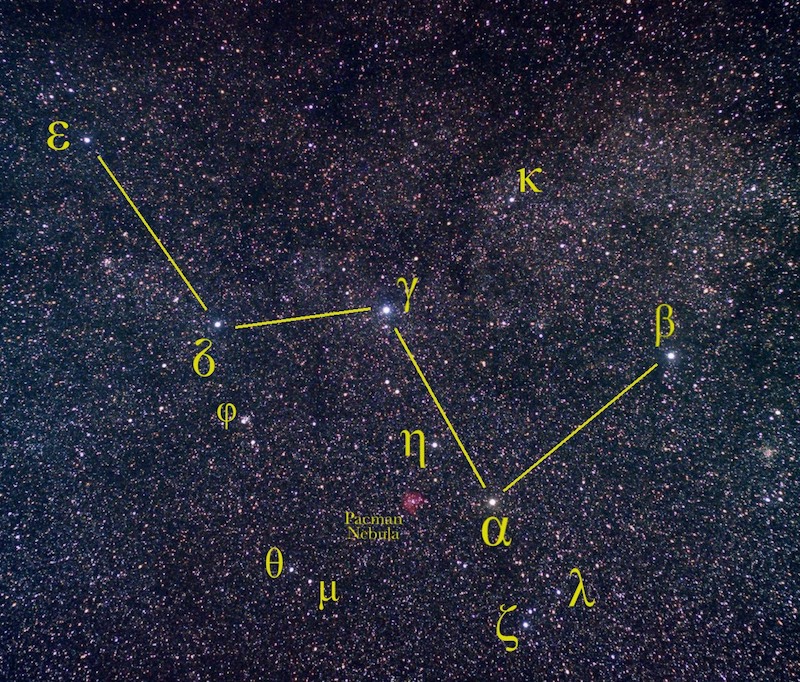 The constellation Cassiopeia the Queen, with Schedar, its brightest star. Schedar is the star marked alpha (α). It’s at the bottom right when you see Cassiopeia as a W, and at the upper left when you see her as an M. Image via Sadalsuud / Wikimedia Commons.

Cassiopeia the Queen, a constellation of bright stars in the northern hemisphere, is a well-loved fixture of fall and winter evening skies. Schedar, also known as Alpha (α) Cassiopeiae, is its brightest star. With the help of a star map, this orange-colored star is easy to find and is often used by stargazers to locate the Andromeda Galaxy.

How to find Schedar. From mid-northern latitudes, Cassiopeia is circumpolar, meaning that it circles endlessly around the north celestial pole, never (or rarely, depending on your latitude) dipping below your horizon. The best time to see Cassiopeia is during fall and winter evenings, since that’s when the constellation rides highest in the sky.

The bright stars of Cassiopeia trace out an M or W, depending on its position in the sky and your perspective. Schedar, the brightest star in Cassiopeia, is located at the W’s bottom-right tip (or the M’s upper-left tip). 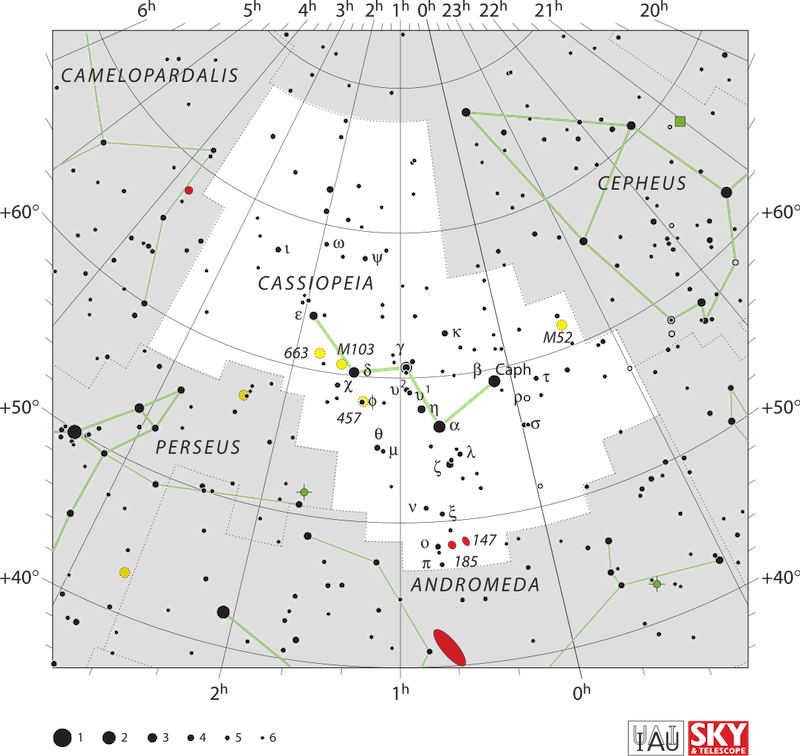 A map of the constellation Cassiopeia the Queen. Here, Cassiopeia looks like a W, with Schedar (α Cassiopeiae) pointing towards the Andromeda Galaxy, shown in red at the bottom of the map. Image via IAU/ Sky & Telescope/ Wikimedia Commons.

Science of Schedar. The star Schedar is 228 light-years away and shines steadily at magnitude 2.2. Despite skywatchers a couple of centuries ago suggesting that the star varied in brightness, modern astronomers have discerned no fluctuations.

The star is about four times the mass of our sun, but it is cooler. Astronomers classify it as a red giant star, and, like all giants, it rotates slowly on its axis. It’s believed that Schedar takes approximately 102 days to rotate once, in contrast to about 25 days for our sun. This star, now in the late stages of stellar evolution, is about 45 times the sun’s diameter due to the expansion of its outer layers.

Schedar was thought to have three stellar companions, all of which are too close to the star to be easily seen. Although these three stars were listed with Schedar in the Washington Double Star Catalog, it now appears that all of them may be unrelated and only lie near Schedar along our line of sight from Earth.

Schedar in the lore of the sky. As the brightest star in the constellation Cassiopeia the Queen, Alpha Cassiopeiae doesn’t have any fantastic stories behind it. But, like all stars, it has its own interesting history. The star’s name, Schedar, derives from the Arabic word for breast.

On old star maps, such as the one drawn by the Flemish cartographer Gerardus Mercator in 1551, Schedar or Alpha Cassiopeiae is depicted as being near the heart of the celestial queen. On this globe, he represents Cassiopeia as the Queen of Ethiopia, whose vanity was legendary. As punishment, it’s said, she is chained to a chair and hangs upside-down. 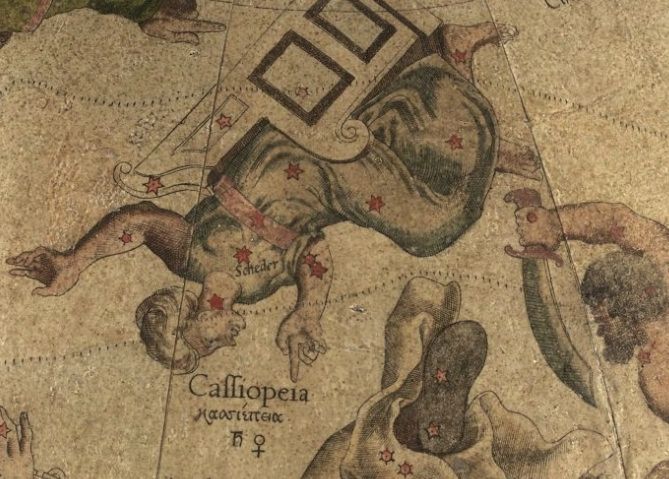 Bottom line: Schedar, the brightest star in the prominent northern constellation Cassiopeia, is easily visible most of the year from northern latitudes.