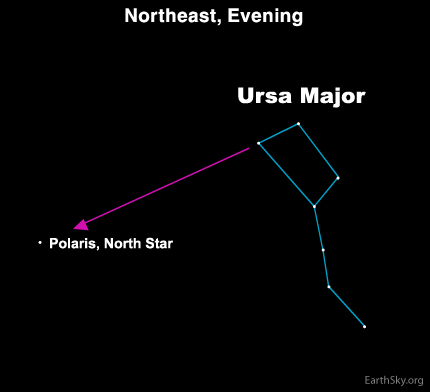 A well-known trick for finding Polaris – the legendary North Star – is that the two outermost stars in the bowl of the Big Dipper point to it. Those stars are called Dubhe and Merak. They’re well known among amateur astronomers by the nickname The Pointers.

At one time, sailors’ livelihoods and survival depended on these pointer stars of the Big Dipper. Many considered them their lucky stars. Scouts also learn to use the Big Dipper and Polaris to find the direction north.

Polaris isn’t the brightest star in the sky, as is commonly believed. It’s a moderately bright 2nd-magnitude star. But it’s bright enough to be easily seen in a dark sky. Unlike the other stars – which either rise in the east and set in the west, or else wheel in a circle around Polaris – the North Star appears fixed in the northern sky.

Every March, at nightfall and early evening, the seven stars of the Big Dipper will light up your northeastern sky. 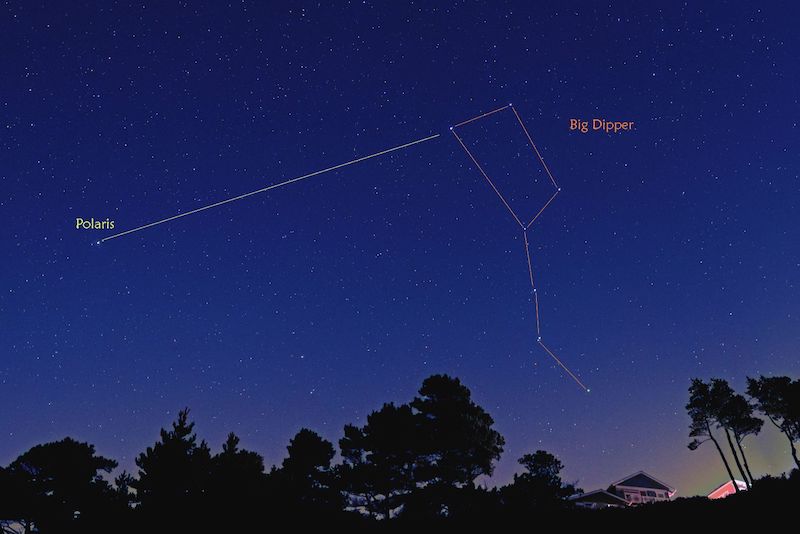 View at EarthSky Community Photos. | Cecille Kennedy in Lincoln City, Oregon, captured this photo of the Big Dipper and the North Star Polaris on March 2, 2021. She wrote: “So thrilled to see the Big Dipper and Polaris, the North Star! I was facing the other way (southwest) taking photos of the bonfires on the beach, and when I turned around to face north, there they were.” Thank you, Cecille! 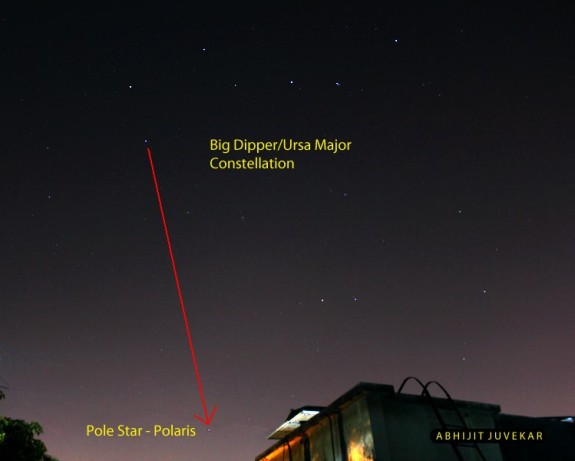 No matter what time of year it is, or what time of night, the 2 outer stars in the bowl of the Big Dipper always point to Polaris, the North Star. Compare this photo – captured by Abhijit Juvekar in India – with the one below. In both photos, the 2 outer stars in the Dipper’s bowl show you Polaris. Note in this photo that India’s low latitude places Polaris near the northern horizon. 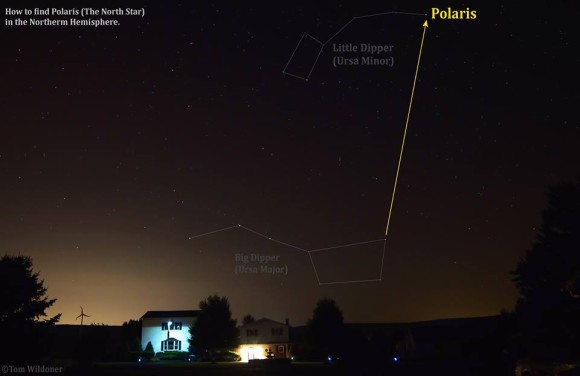 View larger. | South of the equator, Polaris can’t be seen. Otherwise, if you can see the Big Dipper, you can find Polaris. Tom Wildoner of the Dark Side Observatory shared this shot with us. He captured it around 3:30 a.m. in the month of July. Thanks, Tom!

If you stand facing Polaris, then, you’re facing the direction north. If you place Polaris to your back, you’re facing south. You can use Polaris to find directions only in the Northern Hemisphere, however. South of the equator, Polaris drops below the northern horizon.

The Big Dipper itself isn’t a constellation, by the way. It’s an asterism, a recognizable pattern of stars on the sky’s dome.

The Big Dipper is part of the constellation Ursa Major, the Greater Bear. It really does look like a dipper, and it’s pretty bright. Some sources say the Dipper makes up the Bear’s (rather unusual) tail and hindquarters.

Bottom line: Use the Big Dipper to find Polaris, the North Star.