Exoplanets are worlds orbiting distant stars. The history of our knowledge of exoplanets, the various types of exoplanets, how astronomers find them, and more, here. 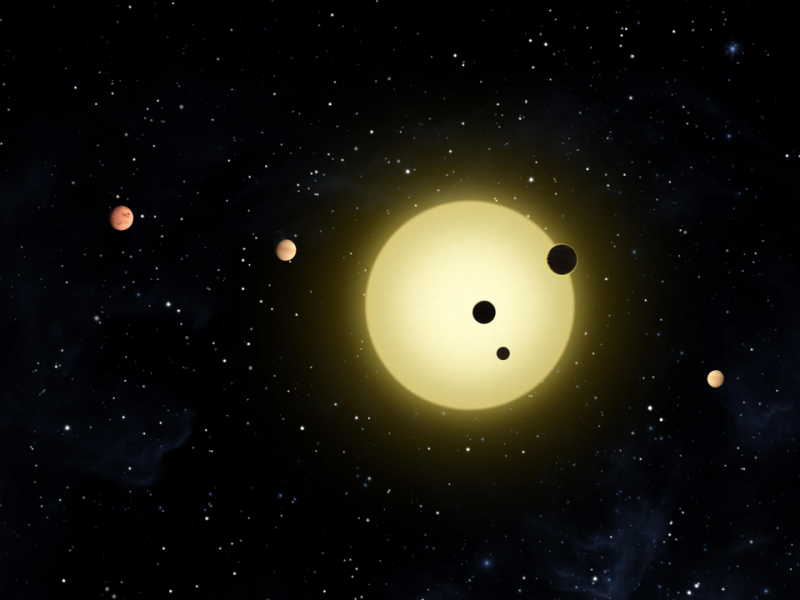 Artist’s impression of exoplanets, or planets orbiting a distant star.

Exoplanets are planets that orbit a star other than our sun. The prefix exo comes from the Greek and means outside; these worlds are far, far outside our own solar system. Astronomers have confirmed more than 4,000 exoplanets orbiting distant stars, with at least 1,000 more more awaiting confirmation. They found the first two exoplanets orbiting a pulsar in 1992. They confirmed the first exoplanet orbiting a sunlike star in 1995. Prior to those discoveries, the existence of planetary systems other than our own had been surmised for centuries and in the early 20th century a planet was heralded for Barnard’s Star (it later turned out to be spurious). The true discoveries came with advancing technology, a relatively recent development.

Why didn’t we see them before? It’s because exoplanets are so far away, several light-years away at their closest. And it’s because – unlike stars – exoplanets don’t shine with their own light. Like our own Earth, they shine only with light reflected from their local stars. In contrast to their stars, exoplanets are exceedingly dim; even the largest are drowned in the light of their vastly brighter stars. That’s why, even now, even the largest are too small to be glimpsed in optical telescopes, although a few have been directly imaged.

Before the first exoplanet discovery, most astronomers assumed exoplanets, if found, would resemble the planets in our solar system. The great shock has been that many exoplanets are very different, with their positions and orbits difficult to explain. If astronomers thought the solar system was in any way representative of other planetary systems out there in the galaxy, they’ve been disappointed. Our solar system may be the exception rather than the rule.

As a harbinger of this realization, the very first exoplanets discovered in 1992 orbit a neutron star, in this case a pulsar (a neutron star that emits beams of radio waves like a lighthouse, which may be detected from the Earth if the beams point in the right direction). Generally speaking, a neutron star is the superdense remains of the core of a massive star after it has ended its life in a supernova explosion. It wasn’t thought possible, and it’s still not fully explained, that planets could survive such a cataclysm. Normally, the neutron stars we see as pulsars rotate with an invariance rivaling that of atomic clocks, making them the most accurate timekeepers of the cosmos. Astronomers Aleksander Wolszczan and Dale Frail were trying to explain irregularities in the rotation of a particular pulsar, known as PSR B1257+12. They realized that slight variations in the star’s rotation could be explained if it were being pulled on by the gravity of two planets, three and four times the mass of the Earth.

Historically significant as this discovery was, astronomers’ main quest in hunting exoplanets was to find one orbiting a sunlike star, not orbiting the remains of a huge star after a supernova. After all, ultimately, the quest is to find a planet like the Earth, and then to find life on that planet. Humans have always asked the question, “Are we alone in the universe?”

Finding an Earth-like planet, especially one where life resides, has been and remains the impetus for our searches for and explorations of these distant worlds.

The detection of the first planet orbiting a main-sequence star like the sun came in 1995, when Didier Queloz discovered a planet at least as massive as Jupiter orbiting the F-Type star 51 Pegasi, some 50 light-years from Earth. He detected it by the star’s “wobble” as an unseen planet pulls on it. For this discovery, he and colleagues Michel Mayor and James Peebles received the Nobel Prize in Physics in 2019.

In the 1990s, the available technology turned up only the largest exoplanets: those with enough gravity to induce a “wobble” in the spin of their parent stars. This method of detecting exoplanets is known as the radial velocity method, and it’s still a highly successful method for detecting exoplanets from Earth’s surface. The radial velocity method – sometimes called Doppler spectroscopy – is more fully explained here.

Nowadays, another method – called the transit method, or transit photometry – is used with even greater success to find exoplanets. NASA’s planet-hunter spacecraft, called Kepler, was used to discover most of the exoplanets known so far, and it employs the transit method. This technique is able to detect smaller exoplanets. The transit method relies on the fact that, when an exoplanet crosses the face of its star as seen from Earth, the star’s light is blocked ever so slightly and it dims. This change in brightness may only be 1%, but is nevertheless detectable with modern instruments such as those carried by Kepler. Read more about the transit method here.

In special circumstances, it’s also obtain a direct image of an exoplanet. This method isn’t widely used to find exoplanets for the reasons explained toward the top of this post: exoplanets are dim, and their parent stars are bright, and thus, as seen from Earth, exoplanets are typically lost in their stars’ glare. But a few exoplanets have been found in this way. Read more about the direct imaging of exoplanets. It should be noted that a famous and beloved exoplanet, Fomalhaut b – the first ever to be directly imaged – turned out not to be an exoplanet, after all, but instead a cloud of dust. Read more about the sad disappearance of Fomalhaut b.

Twenty-five years after the discovery of the first exoplanet orbiting a sunlike star, astronomers have identified many types of planets in the exoplanet “zoo.” Some of these are listed below. See here for a complete list of classifications.

The quest for a true twin of the Earth continues. In June 2019, astronomers announced the discovery of the most Earth-like planet discovered at that time, orbiting Teegarden’s Star, a red dwarf just 12.5 light years away. The exoplanet, designated Teegarden b, has been rated as 95% on the Earth Similarity Index.

But new exoplanets are turning up all the time. Earlier this week, for example, Paul Scott Anderson of EarthSky, who writes frequently about exoplanet discoveries for this website, wrote about a newly discovered exoworld called Kepler-1649c. It’s 300 light-years from Earth, and it’s a potentially habitable Earth-sized world, one of the most promising yet. Read more about Kepler-1649c here.

The detection of exoplanets is carried out by both Earth- and space-based telescopes. Kepler is no longer active (although its data are still being analyzed), but a new planet-hunting spacecraft called TESS is currently active in discovering exoplanets. In December 2019, the European Space Agency (ESA) launched the spacecraft CHEOPS, which is designed to better characterize already-known exoplanets. The new generation of Earth-based telescopes such as the European Extra-Large Telescope (ELT), the world’s largest telescope, currently under construction in Chile, will be able to analyze the atmospheres of exoplanets directly and identify biosignatures such as oxygen and methane.

Thus the ancient dream of finding life elsewhere in the universe may soon be a reality. Stay tuned!

By the way, the cool video below shows all of the multi-planet systems from Kepler’s original mission as of the announcement of Kepler’s end of life: October 30, 2018. Astronomer and planet-hunter Ethan Kruse, who created this visualization using data derived from Kepler, wrote:

The systems are shown together at the same scale as our own solar system (dashed lines). The size of the orbits are all to scale, but the size of the planets are not. For example, Jupiter is actually 11 times larger than Earth, but that scale makes Earth-sized planets almost invisible (or Jupiters annoyingly large). The orbits are all synchronized such that Kepler observed a planet transit every time it hits an angle of 0 degrees (the 3 o’clock position on a clock). Planet colors are based on their approximate equilibrium temperatures, as shown in the legend.

Bottom line: Exoplanets are worlds orbiting distant stars. The history of our knowledge of exoplanets, the various types of exoplanets, how astronomers find them, and more, here.