What is a neutron star?

Neutron stars are born in supernova explosions. They are stars with a couple of times our sun’s mass, squeezed into a sphere the size of an earthly city. 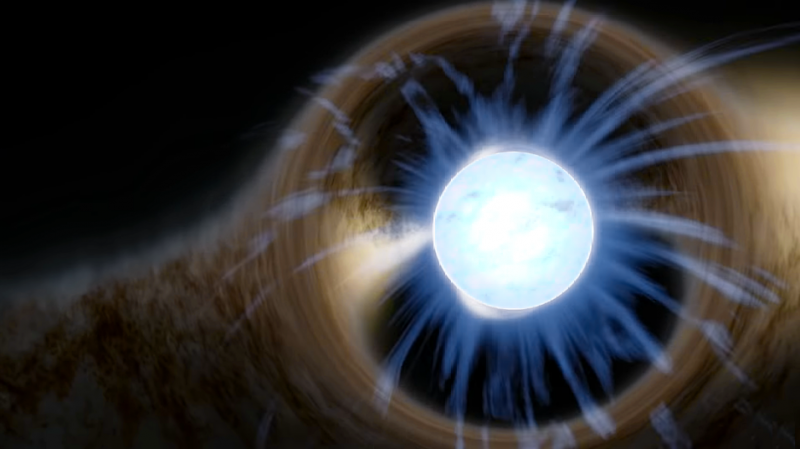 Artist’s concept of a neutron star. The star’s tiny size and extreme density give it incredibly powerful gravity at its surface. Thus this image portrays the space around the neutron star as being curved. Image via Raphael.concorde/ Daniel Molybdenum/ NASA/ Wikimedia Commons.

When – at the end of its life – a massive star explodes as a supernova, its core can collapse to end up as a tiny and superdense object with not much more than our sun’s mass. These small, incredibly dense cores of exploded stars are neutron stars. They’re among the most bizarre objects in the universe.

A typical neutron star has about about 1.4 times our sun’s mass, but they range up to about two solar masses. Now consider that our sun has about 100 times Earth’s diameter. In a neutron star, all its large mass – up to about twice as much as our sun’s – is squeezed into a star that’s only about 10 miles (15 km) across, or about the size of an earthly city.

So perhaps you can see that neutron stars are very, very dense! A tablespoon of neutron star material would weigh more than 1 billion U.S. tons (900 billion kg). That’s more than the weight of Mount Everest, Earth’s highest mountain. 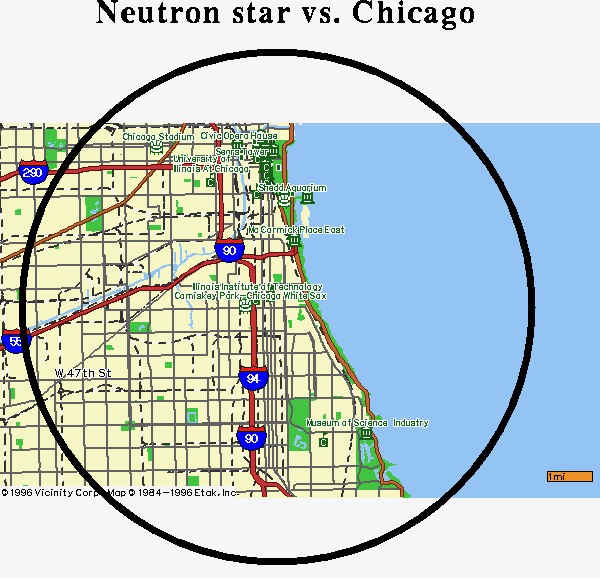 Neutron stars are the collapsed cores of massive stars. They pack roughly the mass of our sun into a sphere with the diameter of a city. Here’s a comparison of a neutron star’s typical diameter with the city of Chicago. Graphic via M. Coleman Miller.

Here’s how neutron stars form. Throughout much of their lives, stars maintain a delicate balancing act. Gravity tries to compress the star while the star’s internal pressure exerts an outward push. The outward pressure is caused by nuclear fusion at the star’s core. This fusion “burning” is the process by which stars shine.

In a supernova explosion, gravity suddenly and catastrophically gets the upper hand in the war it has been waging with the star’s internal pressure for millions or billions of years. With its nuclear fuel exhausted and the outward pressure removed, gravity suddenly compresses the star inward. A shock wave travels to the core and rebounds, blowing the star apart. This whole process takes perhaps a couple of seconds.

But gravity’s victory is not yet complete. With most of the star blown into space, the core remains, which may only possess a couple of times the mass of our sun. Gravity continues to compress it, to a point where the atoms become so compacted and so close together that electrons are violently thrust into their parent nuclei, combining with the protons to form neutrons.

Thus the neutron star gets its name from its composition. What gravity has created is a superdense, neutron-rich material – called neutronium – in a city-sized sphere.

What neutron stars are, and are not. If, after the supernova, the core of the star has enough mass, then – according to current understanding – the gravitational collapse will continue. A black hole will form instead of a neutron star. In terms of mass, the dividing line between neutron stars and black holes is the subject of much debate. Astrophysicists refer to a kind of “missing mass,” occurring between about two solar masses (the theoretical maximum mass of a neutron star) and five solar masses (the theoretical minimum mass of a black hole). Some expect that this mass bracket will eventually be found to be populated by ultra-lightweight black holes, but until now none have been found.

The exact internal structure of a neutron star is also the subject of much debate. Current thinking is that the star possesses a thin crust of iron, perhaps a mile or so thick. Under that, the composition is largely neutrons, taking various forms the further down in the neutron star they are.

A neutron star does not generate any light or heat of its own after its formation. Over millions of years its latent heat will gradually cool from an intial 600,000 degrees Kelvin (1 million degrees Fahrenheit), eventually ending its life as the cold, dead remnant of a once-glorious star. 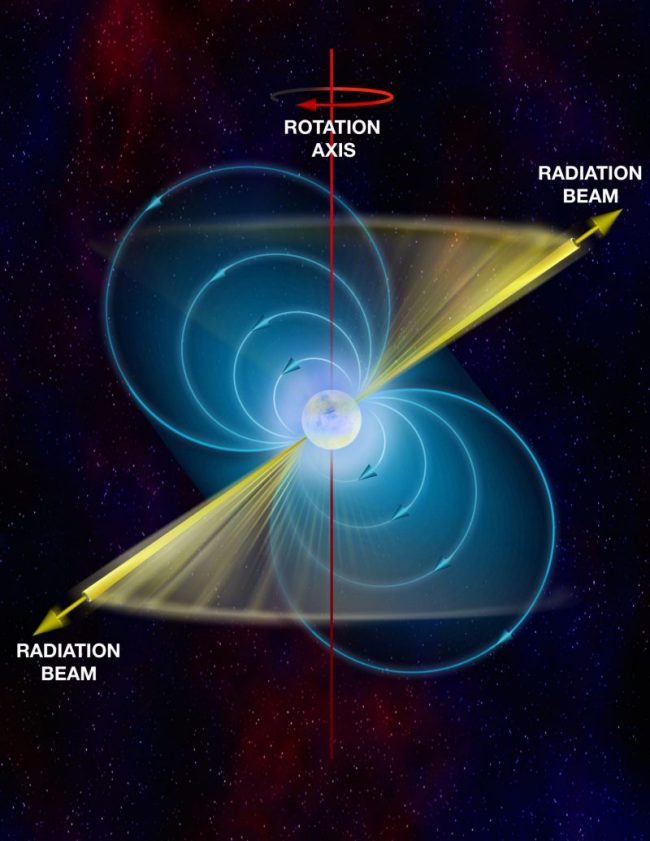 Artist’s concept of a pulsar. Pulsars are neutron stars that are oriented in a particular way with respect to Earth, so that we see them “pulse” at regular intervals. Image via NRAO.

Pulsars: How we know about neutron stars. Although neutron stars were long predicted in astrophysical theory, it wasn’t until 1967 that the first was discovered, as a pulsar, by Dame Jocelyn Bell Burnell. Since then, hundreds more have been discovered, including the famous pulsar at the heart of the Crab Nebula, a supernova remnant seen to explode by the Chinese in 1054.

On a neutron star, intense magnetic fields focus radio waves into two beams firing into space from its magnetic poles, much like the beam of a lighthouse. If the object is oriented just so with respect to Earth – so that these beams become visible from our earthly viewpoint – we see flashes of radio light at regular and extremely precise intervals. Neutron stars are, in fact, the celestial timekeepers of the cosmos, their accuracy rivalling that of atomic clocks.

Neutron stars rotate extremely rapidly, and we can use the radio beams of a pulsar to measure just how fast. The fastest-rotating neutron star yet discovered rotates an incredible 716 times per second, which is about a quarter of the speed of light. 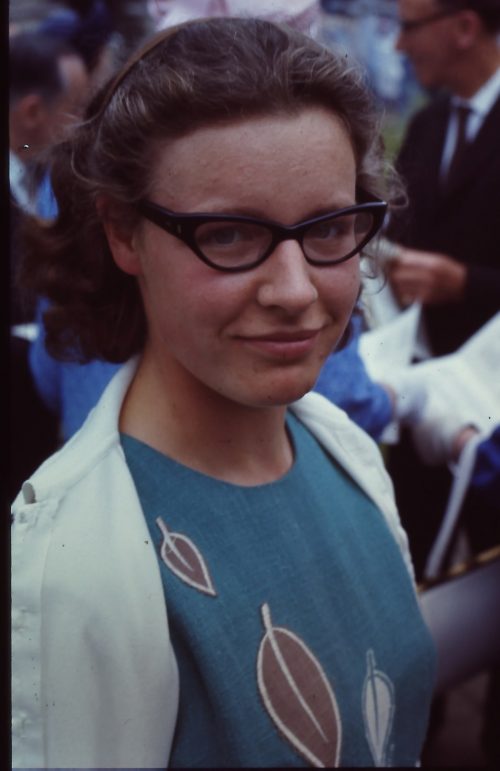 Irish astronomer Jocelyn Bell Burnell was 24 years old when she noticed the odd radio pulses from space that she and her colleagues at first affectionately labeled LGMs, for “little green men.” Later, they understood that the pulses came from neutron stars. Fast-spinning neutron stars seen by earthly astronomers to emit radio pulses are now called radio pulsars. Image via Wikimedia Commons.

More manifestations of neutron stars in our galaxy. There are estimated to be more than a hundred million neutron stars in our Milky Way galaxy. However, many will be old and cold, and therefore difficult to detect. The unimaginably violent neutron star collisions, one of which was detected in 2017 by the LIGO gravitational wave observatories and designated GW170817, are thought to be where heavy elements like gold and platinum are created, as normal supernovae are not thought to generate the requisite pressures and temperatures.

A neutron star that has an abnormally strong magnetic field is known as a magnetar, able to pull the keys out of your pocket from as far away as the moon. The origin of magnetars is not well understood.

Neutron stars, including magnetars and pulsars, are thought to be responsible for several little-understood phenomena, including the mysterious Fast Radio Bursts (FRBs) and the so-called Soft Gamma Repeaters (SGRs).

M. Coleman Miller, a professor of astronomy at University of Maryland, has a great page on neutron stars.

Getting to know pulsars, the lighthouses of the cosmos, from DiscoverMagazine.com

How high are pulsar ‘mountains?’ from LIGO

Sci fi alert! “Dragon’s Egg” by Robert L. Forward (out-of-print) depicts the imaginary inhabitants of the surface of a neutron star. Claudia commented: “They were tiny and dense (of course) and lived at a tremendous speed. It’s been a while, but I remember it as a good read.” Andy added: “Yes, I remember that book! Very entertaining. It’s incredible to think that if the surface of a neutron star slips by as little as a millimeter, it causes a starquake.”

Bottom line: Neutron stars are the collapsed cores of formerly massive stars that have been crushed to an extreme density by supernova explosions. A neutron star isn’t as dense as a black hole, but it’s denser than any other known type of star.