How massive can neutron stars be? 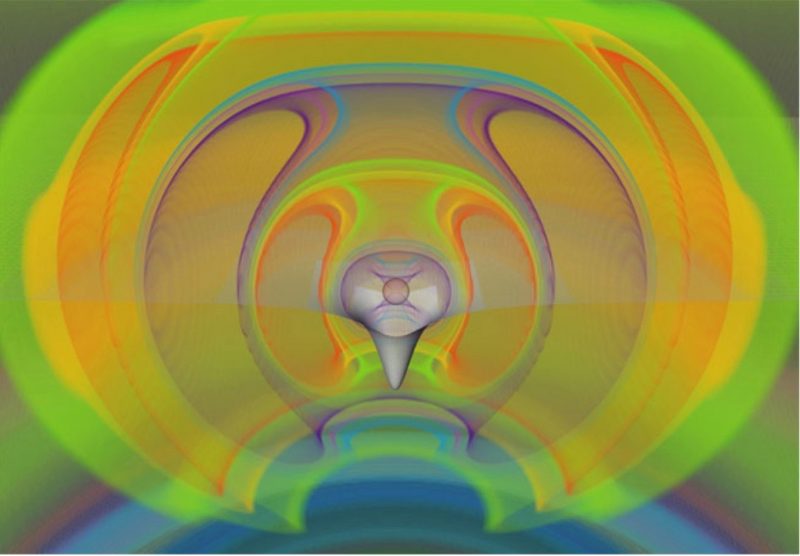 Gravitational-wave emission from a collapsing star, via Goethe University.

In 2016, when the twin LIGO detectors made their first historic observation of gravitational waves, astronomers heralded the news both as a confirmation of Einstein’s general relativity and also because, as they love to say, the detection:

… opened a new window on the cosmos.

And indeed that window has begun to crack. On January 16, 2018, astrophysicists at Goethe University in Frankfurt, Germany described how they used observations of gravitational waves to answer a question that’s plagued scientists since the 1960s, when they first discovered neutron stars, or stars composed predominantly of closely packed neutrons. By definition, a neutron star has a very small radius (about the diameter of an earthly city) and very high density (a teaspoon of neutron star material would weigh about 10 million tons). A typical neutron star mass is about 1.4 suns.

Notice all the abouts in those last couple of sentences? Now, for the first time, astrophysicists are saying they’ve succeeded in putting more precision into those numbers, by calculating a strict upper limit for the maximum mass of neutron stars. They say that, with an accuracy of a few percent, the maximum mass of non-rotating neutron stars cannot exceed 2.16 solar masses.

The research results were published in the peer-reviewed Astrophysical Journal Letters, and, according to these scientists:

Just a few days later, research groups from the USA and Japan confirmed the findings, despite having so far followed different and independent approaches.

What happens to a neutron star that does exceed its mass limit? In that case, the neutron star collapses into an even more compressed and vastly more exotic object known as a black hole.

Physicist Luciano Rezzolla at Goethe University Frankfurt and his students Elias Most and Lukas Weih conducted the study. Their statement explained:

In the near-term future, these scientists expect more observations via gravitational-wave astronomy, which will further reduce uncertainties about neutron stars’ maximum mass. In the meantime, they said, their result is a good example of the interaction between theoretical and experimental research. Rezzolla commented:

The beauty of theoretical research is that it can make predictions. Theory, however, desperately needs experiments to narrow down some of its uncertainties. It’s therefore quite remarkable that the observation of a single binary neutron star merger that occurred millions of light-years away – combined with the universal relations discovered through our theoretical work – have allowed us to solve a riddle that has seen so much speculation in the past.