A beloved exoplanet turns to dust

Fomalhaut b was thought to be one of the few exoplanets photographed so far, but new observations from the Hubble Space Telescope show it’s really an expanding dust cloud. 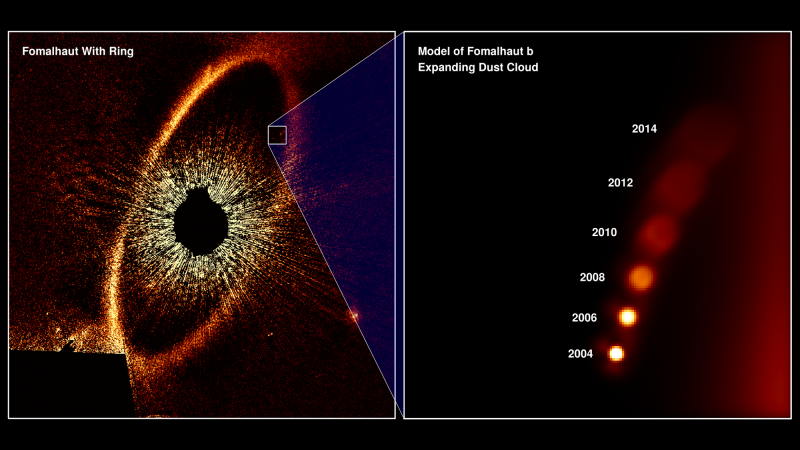 Images of Fomalhaut from the Hubble Space Telescope. Fomalhaut b, previously thought to be a massive planet, is now known to be an expanding dust cloud. A Kuiper belt-like ring of icy debris surrounds the star. Image via NASA/ ESA/ A. Gáspár/ G. Rieke (University of Arizona)/ Hubblesite.

When is a planet not really a planet? Many new exoplanets – over 4,000 now so far – have been discovered and confirmed orbiting other stars. But, sometimes, all might not be quite as it first appears. Meet Fomalhaut b, thought to be a massive world and thought to be one of the only exoplanets to be directly imaged to date. This world orbits the bright star Fomalhaut in the southern constellation Piscis Austrinus. It’s only 25 light-years away and so well loved that it was among the first group of exoplanets to be given proper names, in this case Dagon. Alas. New observations from the Hubble Space Telescope showed that Fomalhaut b or Dagon has apparently disappeared. The results suggest that the well-loved planet wasn’t a planet at all, but rather an expanding dust cloud that formed after two large icy bodies collided.

The disappointing, yet still fascinating, peer-reviewed findings from researchers at the University of Arizona were published on April 20, 2020, in the Proceedings of the National Academy of Sciences.

The announcement that Fomalhaut b or Dagon had been photographed caused a sensation in 2008. Until now, it was thought to be a massive planet. But the new study refutes that:

Although originally thought to be a massive exoplanet, the faintness of Fomalhaut b in the infrared and its failure to perturb Fomalhaut’s debris ring indicate a low mass. We use all available data to reveal that it has faded in brightness and grown in extent, with motion consistent with an escaping orbit. This behavior confirms suggestions that the source is a dispersing cloud of dust, produced by a massive collision between two planetesimals. The visible signature appears to be very fine dust escaping under the influence of radiation pressure. 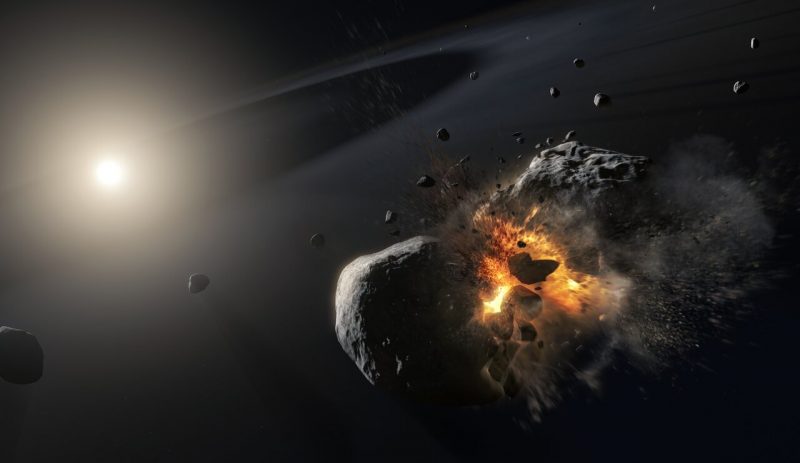 Many will be disappointed at this news about Fomalhaut b. Astronomer András Gáspár of the University of Arizona was lead author of the new study paper. He was clearly trying to make lemonade out of lemons when he said in a statement:

These collisions are exceedingly rare, and so this is a big deal that we actually get to see one. We believe that we were at the right place at the right time to have witnessed such an unlikely event with NASA’s Hubble Space Telescope.

Our study, which analyzed all available archival Hubble data on Fomalhaut, revealed several characteristics that together paint a picture that the planet-sized object may never have existed in the first place.

George Rieke of the University of Arizona’s Steward Observatory added:

The Fomalhaut system is the ultimate test lab for all of our ideas about how exoplanets and star systems evolve. We do have evidence of such collisions in other systems, but none of this magnitude has been observed in our solar system. This is a blueprint of how planets destroy each other. 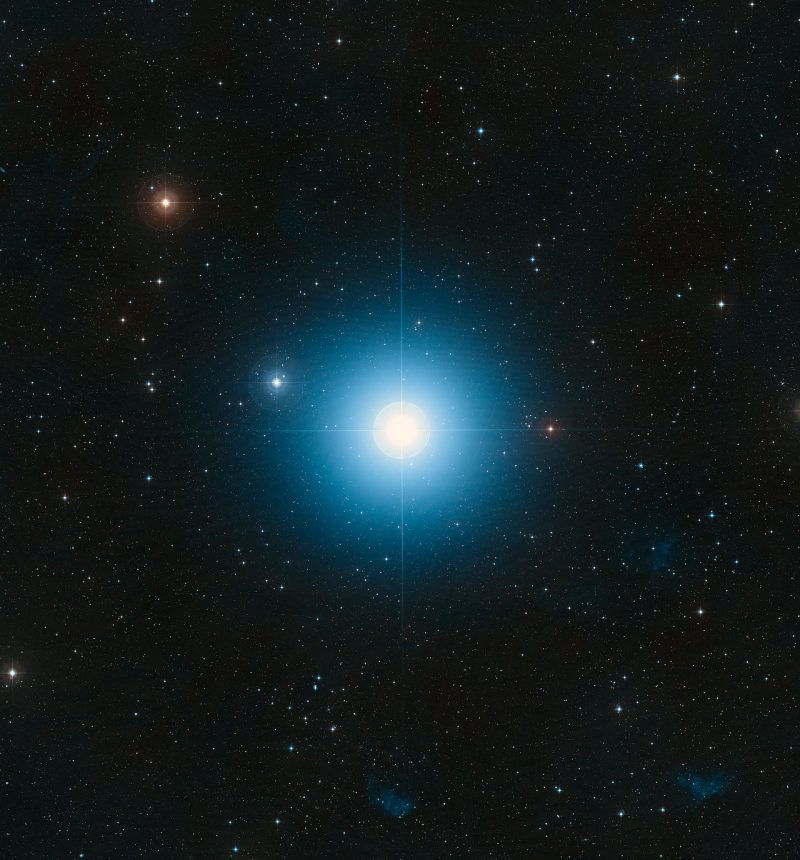 Okay. Instead of a huge planet, the object photographed and labeled Fomalhaut b, subsequently named Dagon, was an expanding cloud of dust. Since it is so far away from us, it still basically looks like just a bright dot in the images, but Hubble’s additional analysis, not previously possible, revealed Fomalhaut b for what it really is. A dust cloud from a collision would also help explain its very eccentric orbit.

Images from 2014 showed that the object had virtually disappeared, as compared to how it appeared in the earlier images. Gáspár said:

Clearly, Fomalhaut b was doing things a bona fide planet should not be doing.

The researchers estimate that the collision occurred fairly recently, not too long before the first images were taken. Since then, the dust cloud has expanded and dispersed, and can no longer be detected by Hubble. It is now much larger than any planet could ever be (but extremely diffuse), around the size of Earth’s orbit around the sun. The dust particles are estimated to be about 1 micrometre (1/50th the diameter of a human hair) in size.

Not only does Fomalhaut b not look like a planet anymore, it also isn’t moving like one. It isn’t going around its star in a nice elliptical orbit like a planet would, but instead appears to be on an escape trajectory that will eventually take it away from its star. This also fits with Fomalhaut b being a dust cloud. Gáspár said:

A recently created massive dust cloud, experiencing considerable radiative forces from the central star Fomalhaut, would be placed on such a trajectory. Our model is naturally able to explain all independent observable parameters of the system: its expansion rate, its fading, and its trajectory. 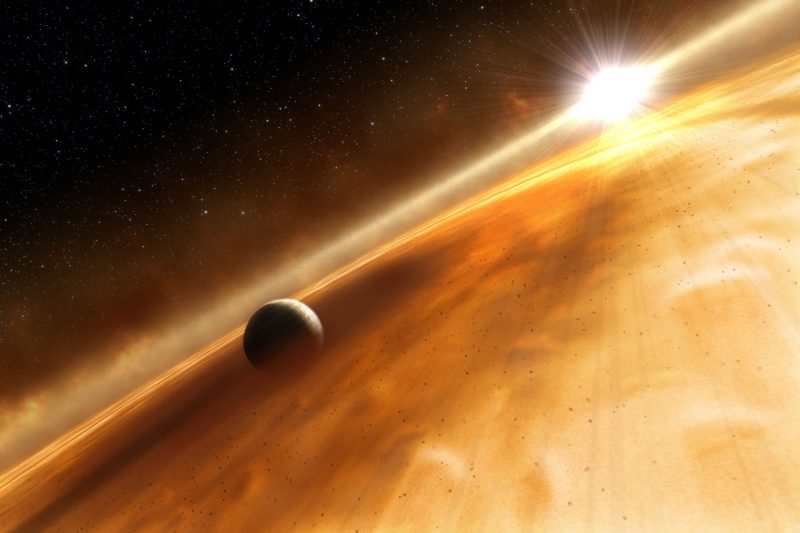 Artist’s concept of Fomalhaut b when it was thought to be an exoplanet. Image via ESA/ NASA/ L. Calcada (ESO for STScI)/ Wikipedia.

There are also clues from the ring of icy debris that surrounds the star, which is much like the Kuiper Belt that surrounds our sun out beyond Neptune. The researchers estimate that many of those frozen bodies are about 125 miles (200 kilometers) across. Collisions between them could create dust clouds like Fomalhaut b, which resides inside this ring. In fact, sophisticated dust dynamical modeling done by the researchers showed that practically all characteristics of the dust cloud could be explained this way. Such collisions are probably rare, however, occurring only once every 200,000 years or so.

Although Hubble has pretty much put the nail in the coffin for Fomalhaut b as a planet, scientists are still eager to continue observing it. The upcoming James Webb Space Telescope (JWST) will study the Fomalhaut system during its first year of operations, including additional direct imaging. For the first time, scientists will be able to resolve the asteroid belt of an extrasolar planetary system.

Just because Fomalhaut b turned out to be a non-planet doesn’t mean that there can’t be other planets in the system, still waiting to be discovered. Fomalhaut is still surrounded by its circumstellar disk, after all. Observations from missions like Kepler and others have shown that almost all stars have at least one planet, and many stars, like our sun, have multiple planets. In fact, there are now estimated to be more planets in our galaxy than stars! So the chances are still good that Fomalhaut has at least one planet as well.

So don’t worry. Although Fomalhaut b may have lost its status as an exoplanet, there are still thousands of other known (and confirmed) exoworlds out there, and many more still waiting to be found.

Bottom line: The well-loved exoplanet Fomalhaut b or Dagon – thought to be the first exoworld to be imaged directly – now appears not to be a planet after all, according to new observations from the Hubble Space Telescope.