Moon passes in front of Taurus the Bull 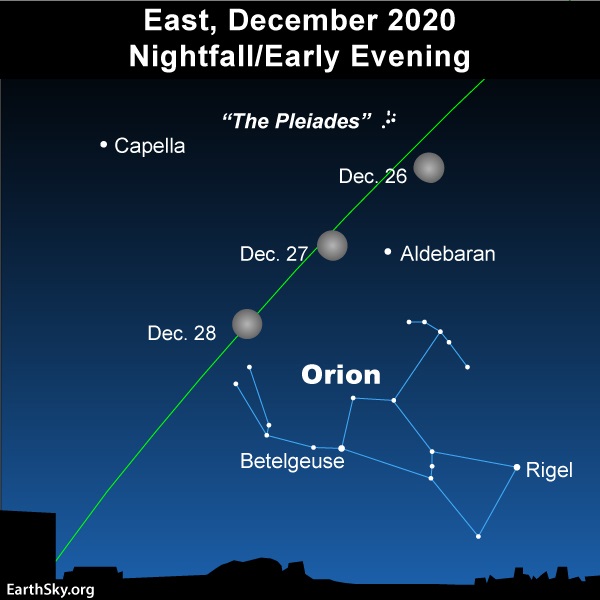 On December 26, 27 and 28, 2020, look for the bright waxing gibbous moon to shine in front of the constellation Taurus the Bull. On December 28, as seen from North America, the moon appears almost to clip the top of Orion’s upraised club. Still, officially, the moon is near the border of Taurus then. It’ll be difficult to see the entire starlit figure of the Bull on these moonlit nights, but – despite the lunar glare – you should be able to glimpse the two major signposts in Taurus: the bright star Aldebaran and the Pleiades star cluster, otherwise known as the Seven Sisters.

During the moon’s trek through Taurus in December 2020, it passes to the south of the Pleiades and then to the north of Aldebaran.

EarthSky’s lunar calendar shows the moon phase for every day in 2021. Order yours now. Going fast! 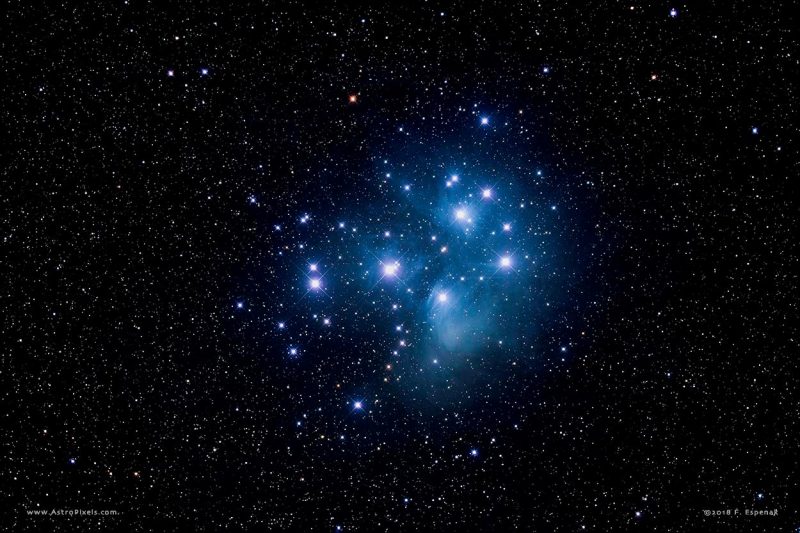 In fact, each month for a few years to come, the moon will pass to the south of the Pleiades and to the north of Aldebaran. Yet, month by month, the moon will travel farther north in front of Taurus, until it goes so far north that it stages a series of 79 lunar occultations of Alcyone (the Pleiades’ brightest star) from September 5, 2023, until July 7, 2029.

Once the moon drops out of the evening sky, you can use the 3 stars of Orion’s Belt to find the star Aldebaran and the Pleiades star cluster. Image via Janne/ Flickr.

Aldebaran marks the tip of a V-shaped pattern of stars – really, a star cluster – called the Hyades, representing the Bull’s face. Yet Aldebaran isn’t part of this star cluster. It’s a chance alignment, with the Hyades cluster at more than twice Aldebaran’s distance away. You’ll have an easier time seeing the V-shaped face of the Bull in a week or two, or once the moon has dropped out of the evening sky.

Ruddy Aldebaran depicts the Bull’s fiery red eye. After the moon and Aldebaran first pop into view at nightfall, they’ll continue (along with the other stars) to move westward as Earth spins under the sky. These two luminaries will set in the west in the wee hours before dawn.

The moon and Aldebaran go westward across the sky tonight for the same reason that the sun goes westward during the day, because Earth rotates from west to east on its rotational axis. So, each day, as the Earth spins full circle beneath the heavens, the sun, moon, stars and planets all appear to go across the sky from east to west.

At the same time, the moon is actually traveling through space – moving in orbit – eastward in front of the constellation Taurus the Bull at the rate of about 1/2 degree (the moon’s angular diameter) per hour. Relative to the backdrop stars of the zodiac, the moon travels on the average of about 13 degrees per day.

If you watch the moon over the next several nights, you’ll see the waxing gibbous moon farther east relative to the backdrop stars than on the previous night, as shown on the feature sky chart at top. As it moves, the moon is edging closer toward full moon, which will come on the night of December 29, 2020. 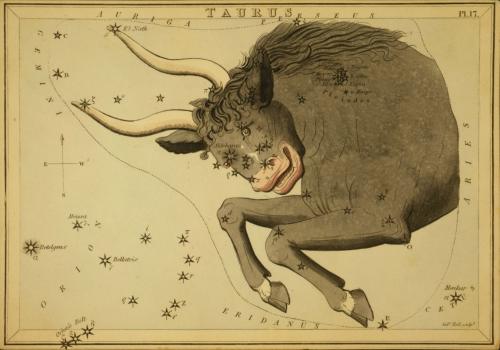 The constellation Taurus the Bull.