How to find to find the constellation Taurus in your night sky. Plus the names of some of its bright stars and star clusters and its mythology. 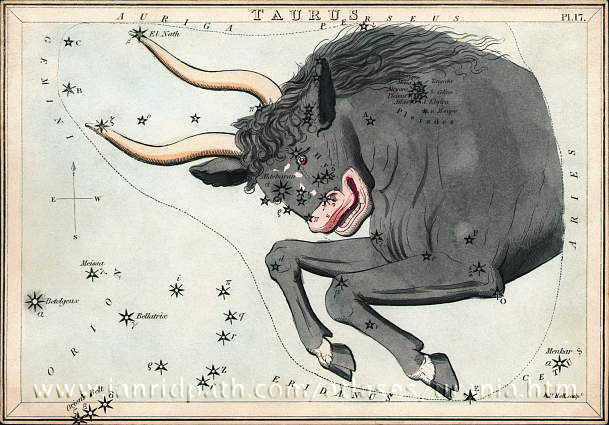 Taurus the Bull is a constellation of the zodiac that you can see during Northern Hemisphere winter and spring (or Southern Hemisphere summer and fall) in the evening sky. The sun passes through the constellation Taurus from about May 14 to June 21, but you can’t see Taurus when the sun is within its borders. Instead, try looking for Taurus in the early evening sky at the opposite end of the year.

The three stars of Orion’s Belt always point to the star Aldebaran and the Pleiades star cluster. Image via Janne/ Flickr.

To see Taurus, start by looking along the sun’s path.
Just remember that, by definition, zodiacal constellations are those that mark the sun’s yearly path across our sky. That’s what made them so important and special to the early stargazers – and it also will help guide your eye to these constellations in the night sky.

Once you’ve gotten yourself oriented with respect to the sun’s path, then let the three famous Belt stars of the constellation Orion the Hunter guide your eye. Orion and Taurus are next-door neighbors on the sky’s dome. Practiced stargazers often use Orion’s Belt to find Taurus’ most prominent signposts: the V-shaped Hyades star cluster with the bright star Aldebaran in its midst, and the magnificent Pleiades star cluster.

In other words, as you can see from the illustration above, Orion’s Belt points to Aldebaran and the Pleiades.

Taurus is one of the most spectacular constellations in the nighttime sky. In addition to Aldebaran, Taurus has the intriguing star Elnath. Plus it has two fine star clusters, the Pleiades and the Hyades. And this constellation is the radiant point for the annual Taurid meteor shower in November.

What’s more, Taurus also features the telescopic Crab Nebula (M1), the remains of a cataclysmic supernova explosion that lit up the daytime sky in 1054 A.D. 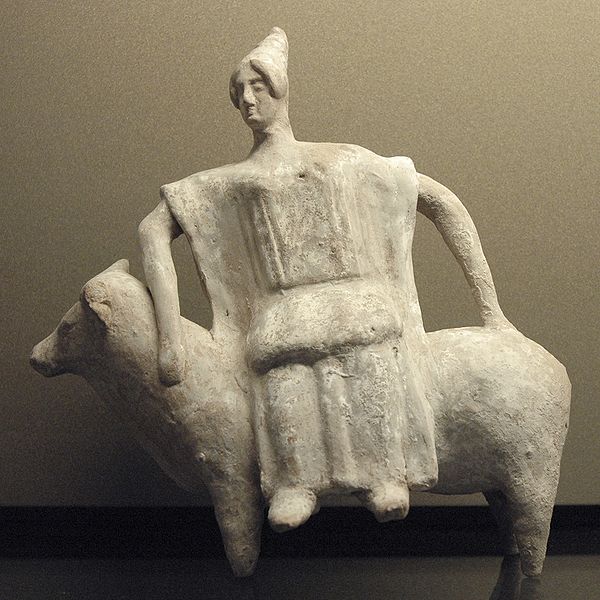 Europa carried by Zeus, after he was transformed into a bull. Terracotta figurine from Boeotia, ca. 470 B.C.-450 B.C. Image via Wikimedia Commons.

Taurus the Bull in mythology and timekeeping.
According to Greek mythology, the constellation Taurus commemorates the god Zeus changing himself into a beautiful white Bull to win the affections of the Phoenician princess Europa. After Europa hopped onto the Bull’s back, the Bull swam across the Mediterranean Sea, taking Europa all the way to the island of Crete. Zeus and Europa became the parents of Minos, the legendary king of Crete.

The Zuni of New Mexico used the Pleiades cluster as an agricultural calendar. When the Pleiades – which the Zuni called the Seed Stars – disappeared into the western dusk in spring, they knew it was safe to plant their seeds, as the danger of frost had passed. But the Zuni also knew the planting must be done before the Pleiades reappeared in the east before sunrise – else immature plants would succumb to autumn frosts.

The Zuni were hardly alone in their reverence for Taurus’ Pleiades star cluster. Probably no other star formation has enjoyed such worldwide renown for timekeeping, celebration and storytelling.

Bottom line: Constellation Taurus the Bull: How to find it your night sky, some of its bright stars and star clusters, mythology.