From April through June, Leo the Lion — one of the zodiacal constellations — is a prominent fixture in the evening sky. It’s quite easy to spot. 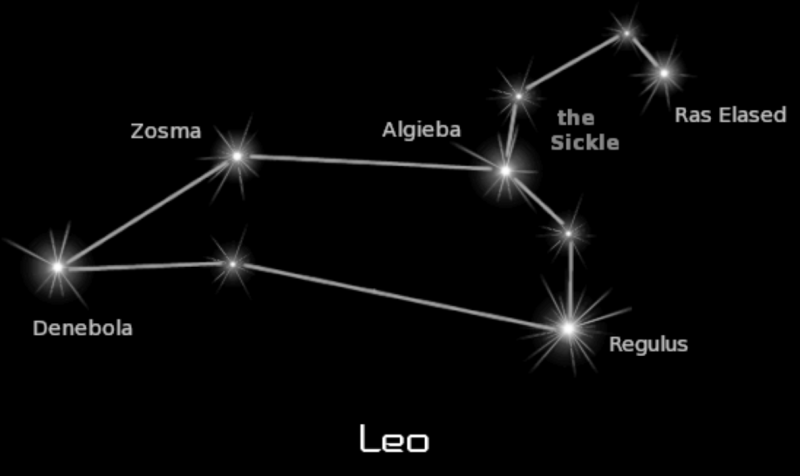 Leo the lion is one of the easiest-to-see of the 13 constellations of the zodiac. You can start by finding the bright star Regulus, then trace out a distinctive pattern of stars shaped like a backwards question mark, known as The Sickle. This pattern represents the Lion’s mane. In Greek mythology, Leo represented the vicious Nemean Lion that was killed by the legendary Greek hero Heracles.

From a Northern Hemisphere perspective, the Lion is a fair-weather friend, springing into the early evening sky around the March equinox.

Late March, April, and May are superb months for identifying Leo the Lion, as this constellation becomes visible as soon as darkness falls and stays out until the wee hours of the morning. Remember, you are looking for a backwards question mark pattern. Leo’s brightest star, Regulus is a sparkling blue-white beauty of a star, located at the bottom of the backwards question mark pattern. Regulus depicts the Lion’s heart.

Can you find Leo in the photo below, from Alan Dyer?

The stars in Leo, obtained using a camera and 35 mm lens, by astrophotographer Alan Dyer. Regulus is the bright blue star in the lower mid-right. From Regulus, you can trace out the backward question mark pattern. Denebola is the bright blue star in the triangle at the rear of Leo. In this image, on the right, you’ll see an open star cluster, the constellation Coma Berenices. You can star hop from Leo to the Coma star cluster. Image via Alan Dyer / AmazingSKY.com. 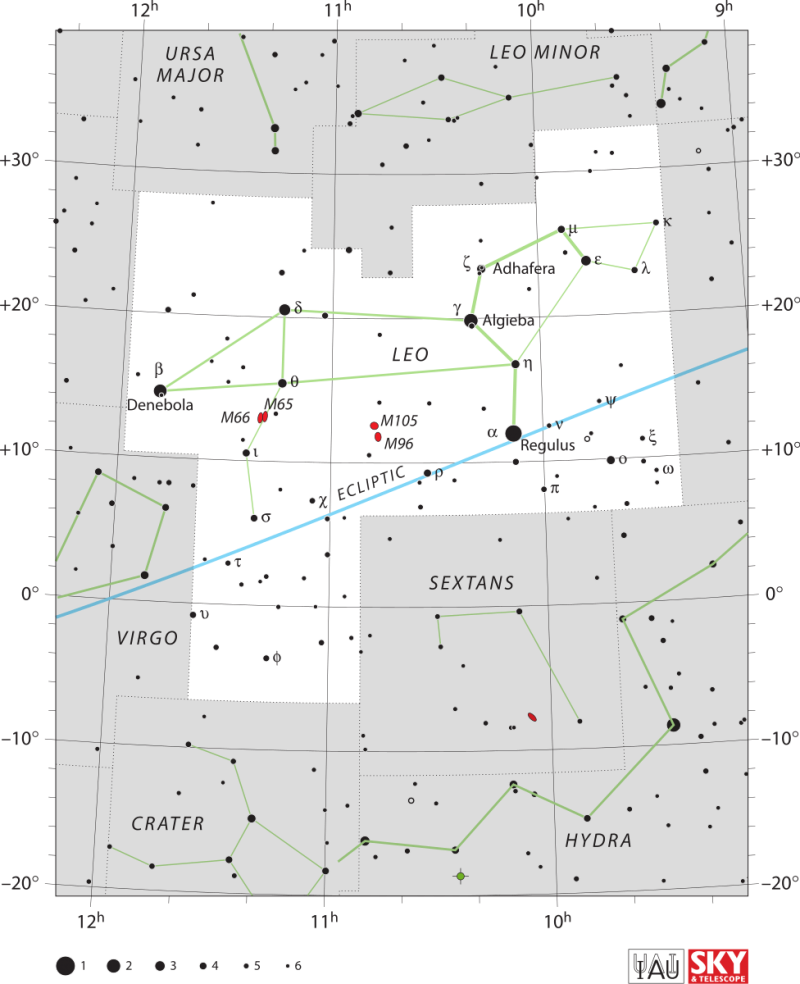 A map of the constellation Leo the lion. Image via IAU and Sky & Telescope / Wikimedia Commons.

A triangle of stars in eastern Leo represents the Lion’s hindquarters and tail. The brightest star of the triangle is named Denebola, which stems from an Arabic term meaning the Lion’s Tail.

Though Leo drifts progressively westward in the early evening sky as the months go by, the Lion can be viewed in the evening till July. By late July or early August, the Lion begins to fade into the sunset. From about August 10 to September 16, the sun passes in front of Leo. The constellation returns to the eastern predawn sky in late September or October.

Find Leo by star-hopping from the Big Dipper.

What can you see with a telescope in Leo?

Check out the chart above to get a sense of the telescopic riches that lie within the boundaries of this constellation.

The star Algieba or γ Leonis is a double star, visible in a small telescope when the atmosphere is steady. If the stars are twinkling wildly, that indicates a turbulent – not steady – atmosphere. On the other hand, if the stars are twinkling very little or not at all, try your luck at splitting Algieba – which looks like a single star to the eye – into its two colorful component stars with the telescope.

A close-knit pair of galaxies in Leo also provide an inviting target for the telescope: M65 and M66. With a low-powered telescope, you might be able fit both M65 and M66 into a single field of view. 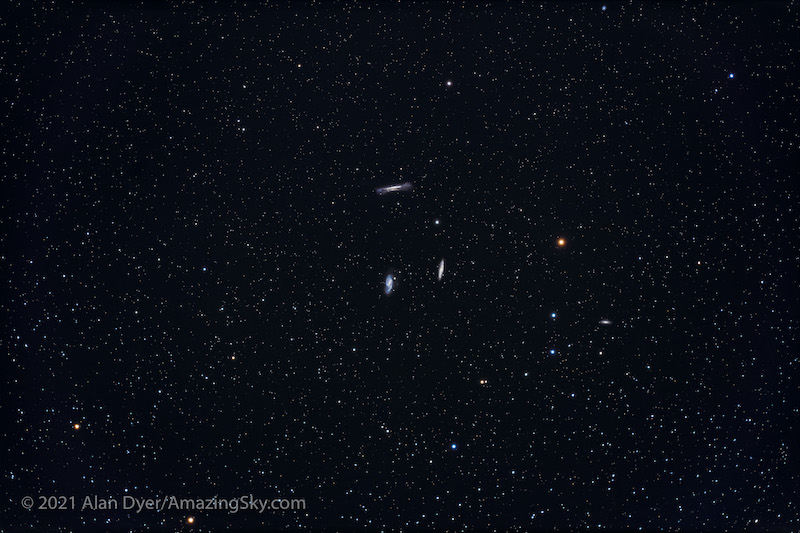 The Leo triplet galaxies, seen through a small telescope (a 94 mm refractor). The galaxy at the top is NGC 3628. On the bottom left is Messier 66 with Messier 65 to its right. Image via Alan Dyer / AmazingSKY.com.

Next, try your luck with the other galaxy pair: M95 and M96. 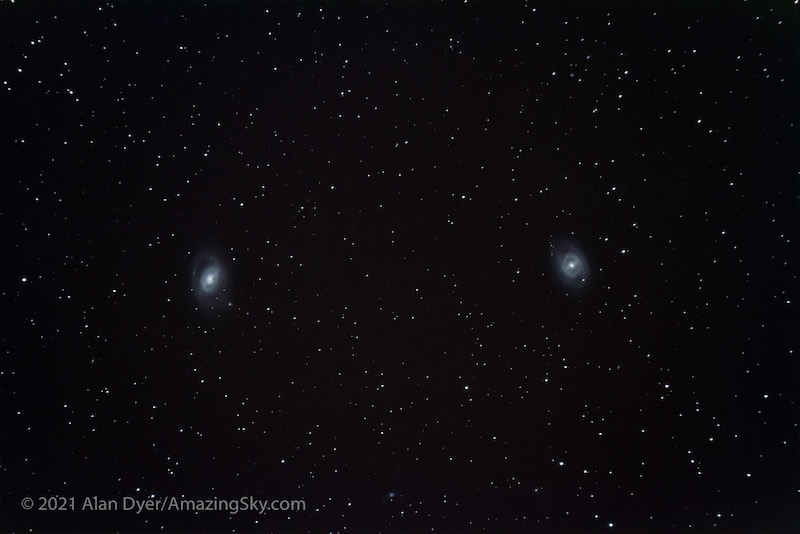 Messier 96 is on the left and Messier 95 to the right, in this image captured by Alan Dyer using a small telescope (130 mm refractor). Both are barred spiral galaxies. Image via Alan Dyer / AmazingSKY.com.

Constellation Leo in history and myth.

Leo the Lion has long been associated with the sun. The ancient Egyptians held Leo in the highest esteem, because the sun shone in front of this constellation at the time of the annual flooding of the Nile River, the lifeblood of this agricultural nation.

It’s thought that the various lion-headed fountains designed by Greek and Roman architects symbolize the life-giving waters being released by the sun’s presence in Leo.

In astrology, Leo – one of the three fire signs of the Zodiac – is ruled by the sun.

Many stories are associated with Leo the Lion. Perhaps the two better-known tales feature Heracles’ (also known as Hercules) first labor with the notorious Nemean Lion, and the Roman author Ovid’s rendering of the tragic love affair of Pyramus and Thisbe. 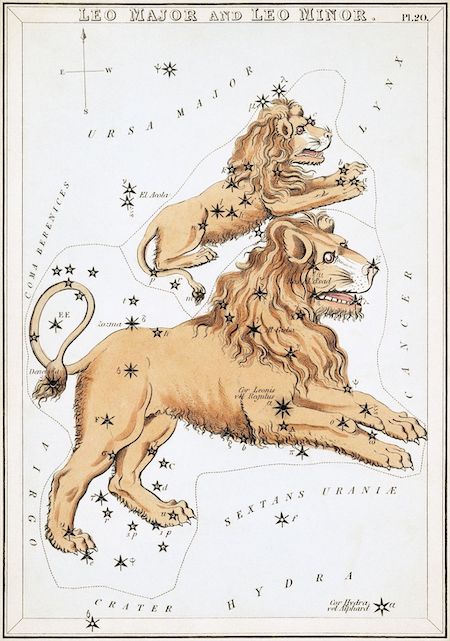 Leo the Lion, with the constellation Leo Minor, as it appears in Urania’s Mirror, a set of cards by Sidney Hall depicting the constellations that was published in 1825. Image via US Library of Congress / Wikimedia Commons. 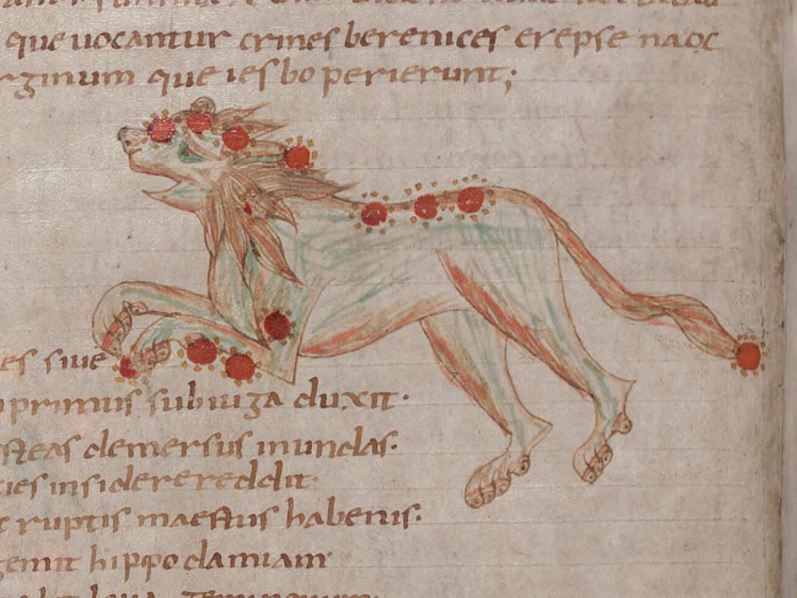 Leo the Lion, from an ancient manuscript dating sometime between 1001 and 1100 CE. Image via National Library of Wales / Wikimedia Commons.

Bottom line: Leo the Lion, one of the easiest zodiacal constellations to find, starts its appearance in the evening sky in late March. It’s associated with the Nemean lion of Greek lore.