Moon, Gemini stars, Procyon on May 28 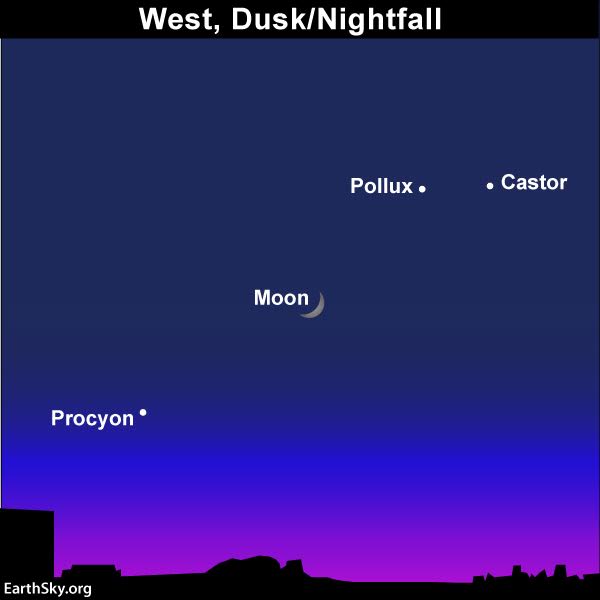 Draw an imaginary line from Procyon and in between the stars Castor and Pollux, as depicted on the sky chart below. At or near the equator, this line (or arc) is close to horizontal, so Castor and Pollux are seen pretty much directly to the right of Procyon.

Yet, at northerly latitudes in the Northern Hemisphere, this line or arc angles upward from left to right, with Castor and Pollux to the upper right of Procyon. The farther north you live, the progressively steeper the angle gets.

At the Earth’s North Pole, this arc of right ascension on the sky’s dome is vertical, or goes straight up-and-down, with Castor and Pollux towering directly above Procyon.

At southerly latitudes in the Southern Hemisphere, this line or arc angles upward from right to left, with Procyon to the upper left of Castor and Pollux. The farther south you live, and the closer you are to the Earth’s South Pole, the closer this line comes to being vertical.

Bottom line: On May 28, 2017, let the waxing crescent moon guide you to the Gemini stars, Castor and Pollux, and to Procyon, the Little Dog star.

Thank you! Your submission has been received!
Oops! Something went wrong while submitting the form.
END_OF_DOCUMENT_TOKEN_TO_BE_REPLACED