The Crab Nebula was an exploding star

The Crab Nebula, about 6,500 light-years from Earth, is the scattered fragments of a supernova, or exploding star, observed by earthly skywatchers in the year 1054. 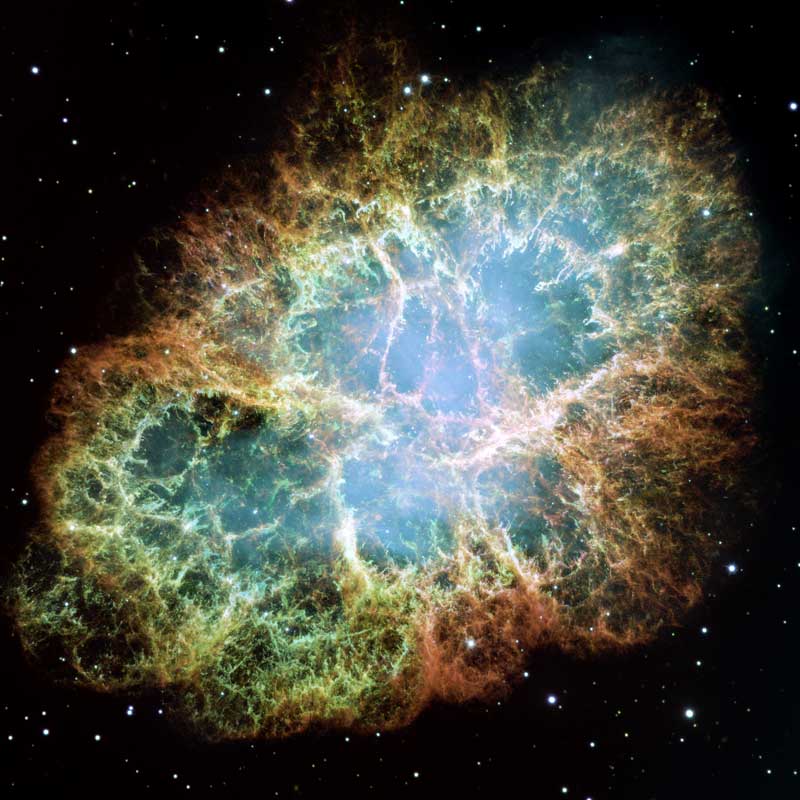 The Crab Nebula is a cloud of gas and debris rushing outward from a great stellar explosion seen a thousand years ago by earthly skywatchers. The Hubble image above shows intricate filimentary structure in the expanding debris cloud. Color and contrast are enhanced to show detail. Image via NASA/ESA/J. Hester and A. Loll (Arizona State University).

The Crab Nebula is so named because, as seen through a telescope with the human eye, it appears vaguely like a crab. In reality, it’s a vast, outwardly rushing cloud of gas and debris: the scattered fragments of a supernova, or exploding star. Earthly skywatchers saw a “guest” star in the constellation Taurus in July of 1054 A.D. Today, we know this was the supernova. The estimated distance to what’s left of this star – the Crab Nebula – is about 6,500 light-years. So the progenitor star must have blown up some 7,500 years ago. 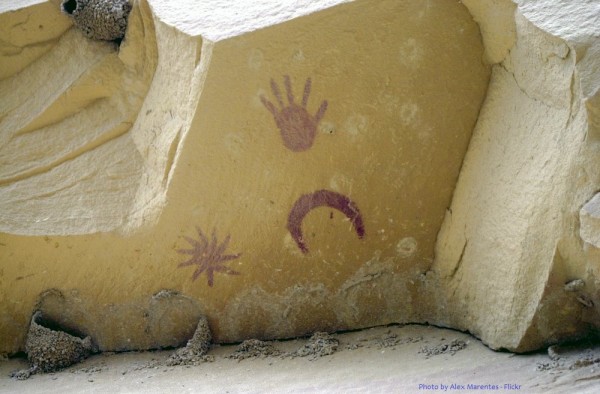 History of the Crab Nebula. On July 4, in the year 1054 A.D., Chinese astronomers noticed a bright “guest” star near Tianguan, a star we now call Zeta Tauri in the constellation of the Taurus the Bull. Although the historical records are not precise, the bright new star likely outshone Venus, and for a while was the third-brightest object in the sky, after the sun and moon.

It shone in the daylight sky for several weeks, and was visible at night for nearly two years before fading from view.

It is likely that skywatchers of the Anasazi People in the American Southwest also viewed the bright new star in 1054. Historic research shows that a crescent moon was visible in the sky very near the new star on the morning of July 5, the day following the observations by the Chinese. The pictograph above, from Chaco Canyon in New Mexico, is believed to depict the event. The multi-spiked star to the left represents the supernova near the crescent moon. The handprint above may signify the importance of the event, or may be the artist’s “signature.”

From June or July 1056, the object was not seen again until 1731, when an observation of the now quite faint nebulosity was recorded by English amateur astronomer John Bevis. However, the object was rediscovered by French comet-hunter Charles Messier in 1758, and it soon became the first object in his catalog of objects not to be confused with comets, now known as the Messier Catalog. Thus, the Crab Nebula is often referred to as M1.

In 1844, astronomer William Parsons, better known as the third Earl of Rosse, observed M1 through his large telescope in Ireland. He described it as having a shape resembling a crab, and since then M1 has been more commonly called the Crab Nebula.

However, it was not until the 20th century that the association with Chinese records of the 1054 “guest” star was discovered. 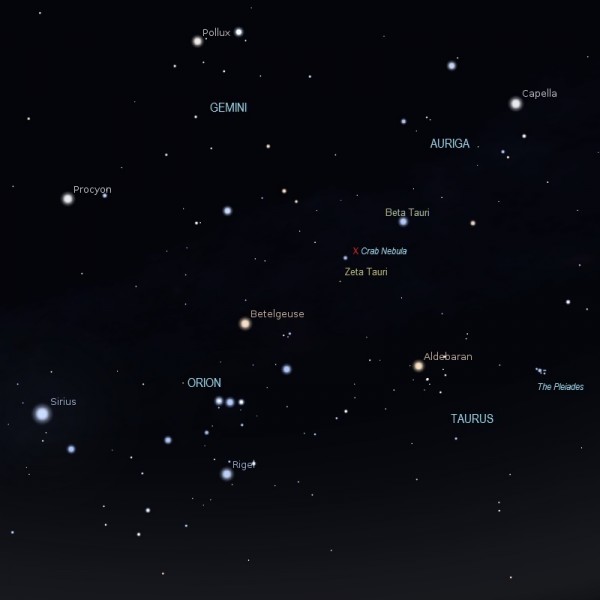 View larger. | The Crab Nebula is located among some of the brightest stars and easiest-to-identify constellations in the heavens. Best placed for evening observing from late fall through early spring, the Crab can be spotted very near the star Zeta Tauri. This chart courtesy of Stellarium.

How to see the Crab Nebula. This beautiful nebula is relatively easy to locate due to its location near a bevy of bright stars and recognizable constellations. Although it can be seen at some time of night all year except from roughly May through July when the sun appears too close, the best observing comes from late fall through early spring.

To find the Crab Nebula, first draw an imaginary line from bright Betelgeuse in Orion to Capella in Auriga. About halfway along that line you will find the star Beta Tauri (or Elnath) on the Taurus-Auriga border.

Having identified Beta Tauri, backtrack a little more than a third of the way back to Betelgeuse and you should find the fainter star Zeta Tauri easily. Scanning the area around Zeta Tauri should reveal a tiny, faint smudge. It is located about a degree from the star (that’s about twice the width of a full moon) more or less in the direction of Beta Tauri.

Binoculars and small telescopes are useful for finding the object and showing its roughly oblong shape, but are not powerful enough to show the filimentary structure or any of its internal detail. 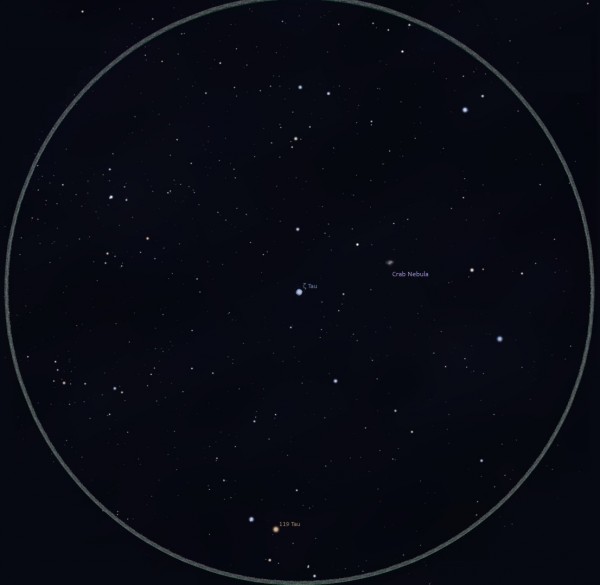 Simulated view of Zeta Tauri and Crab Nebula in a 7-degree field of view. Chart based on a screen save from Stellarium.

The first eyepiece view, above, simulates a 7-degree field of view centered around Zeta Tauri, approximately what might be expected with a 7 X 50 pair of binoculars. Of course, the exact orientation and visibility will range widely depending on time of observation, sky conditions and so on. Scan around Zeta Tauri for the faint nebulosity. 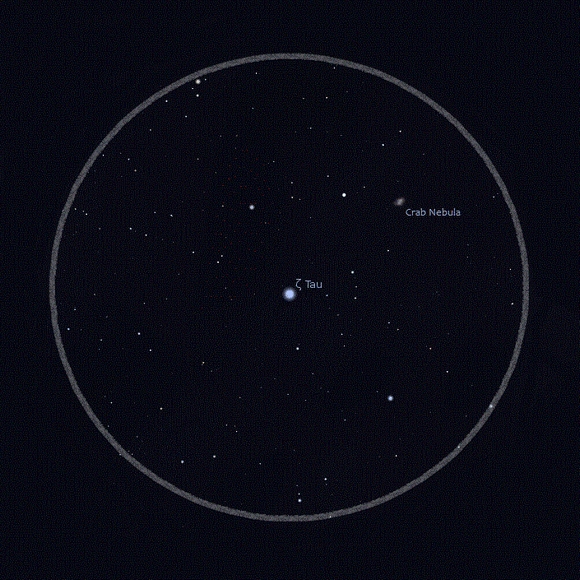 Simulated view of Zeta Tauri and Crab Nebula with 3.5-degree field of view. Chart based on a screen save from Stellarium.

The second image, above, simulates an approximately 3.5-degree view, as might be expected with a small telescope or finder scope. To give you a clear idea of scale, two full moons would fit with room to spare in the space between Zeta Tauri and the Crab Nebula here.

Keep in mind that exact conditions will vary.

Science of the Crab Nebula. The Crab Nebula is the remnant of a massive star that self-destructed in an enormous supernova explosion. This is known as a Type II supernova, a typical result for stars at least eight times more massive than our sun. Astronomers have determined this through several types of evidence and reasoning including the following points.

First, the bright new or “guest” star seen by Asian astronomers and others in 1054, just as would be expected of an exploding star.

Second, the Crab Nebula has been located in the location indicated by ancient records as being where the “guest” star was seen.

Third, the Crab Nebula has been shown to be expanding outward, precisely as the debris cloud from a supernova would.

Fourth, spectroscopic analysis of the gases of the cloud is consistent with formation through  a Type II supernova rather than other means.

Fifth, a pulsing neutron star, a typical product of Type II supernova explosions, has been found embedded in the cloud.

The lifetime of a massive star is complicated, especially near the end. Through its lifetime, its enormous mass provides enough gravity to contain the outward push of nuclear reactions in its core. This is called thermodynamic equilibrium.

However, near the end, there is not enough nuclear fuel to produce the outward pressure to hold back the crushing force of gravity. At a certain point, the star suddenly collapses violently, the inward force squeezing the core to unimaginable densities. Either a neutron star or a black hole can be formed. In this case, the electrons in the core were pressed into the protons, forming neutrons and squeezing the core into a tiny, dense and rapidly rotating ball of neutrons called a neutron star. Sometimes, as in this case, the neutron star can pulsate in radio waves, making it a “pulsar.”

While the core is squeezed into a neutron star, the outer portions of the star bounce off and spread into space, forming a great cloud of debris, complete with common ingredients such as hydrogen and helium, cosmic dust, and elements produced only in supernova explosions.

Bottom line: How to locate the Crab Nebula, plus history and science surrounding this fascinating region of the night sky.