Ursid meteors to peak in moonlight

The Ursid meteor shower is active each year around the December solstice. In 2018, peak morning is probably December 22, but the moon will be full then. If you’re out before sunup, watch for Ursids this week! 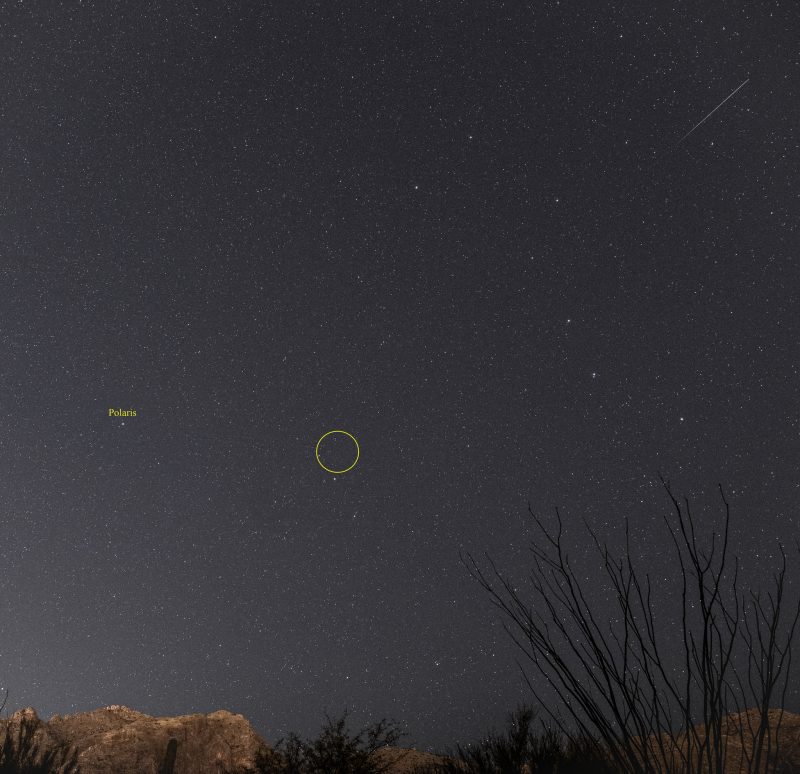 Ursid meteor moving away from its radiant point in the constellation Ursa Minor – home constellation of Polaris, the Pole Star – during the peak of 2017’s shower. Photo by Eliot Herman in Tucson, Arizona. Thank you, Eliot!

The low-key Ursid meteor shower is active each year around December 17 to 26, with a peak around the December solstice. At its peak, in a dark sky, this shower offers perhaps five to 10 meteors per hour during the predawn hours. But it’s been known to have good years, with 100 meteors per hour seen, and that’s why people watch for it. This year, in 2018, the peak of the Ursid shower falls on the same date as the full moon, on the morning of December 22 – so the full moon is sure to put a damper on this year’s display.

Will you see any Ursids this year? Your best bet is to watch in the mornings leading up to the shower’s peak, when there’s a window of darkness between moonset and dawn.

And – if you decide to watch it – you might enjoy this bit of Ursid history. Some meteor showers, such as the Perseids in August, have been watched each year at the same time for many centuries. The Ursid shower is new. It was first observed around the turn of the 20th century, when a skywatcher noticed that some meteors seen around this time of year weren’t random in their direction of motion across our sky’s dome, but instead appeared to radiate from near the star Kochab in the bowl of the Little Dipper asterism.

As the years of the 20th century passed, careful observers noticed some the Ursid outbursts. Although the Ursid meteor shower has been observed for only a single century – and although rates are typically around 5-10 meteors per hour – the Ursids have gained popularity in recent years because of these possible outbursts. Bursts of about 100 meteors per hour happened in 1945 and 1986. An unexpected increase of 30 per hour came in 1973.

So, once again, meteor-watching is like fishing! You never know what you’re going to get, but you hope you catch a big one! 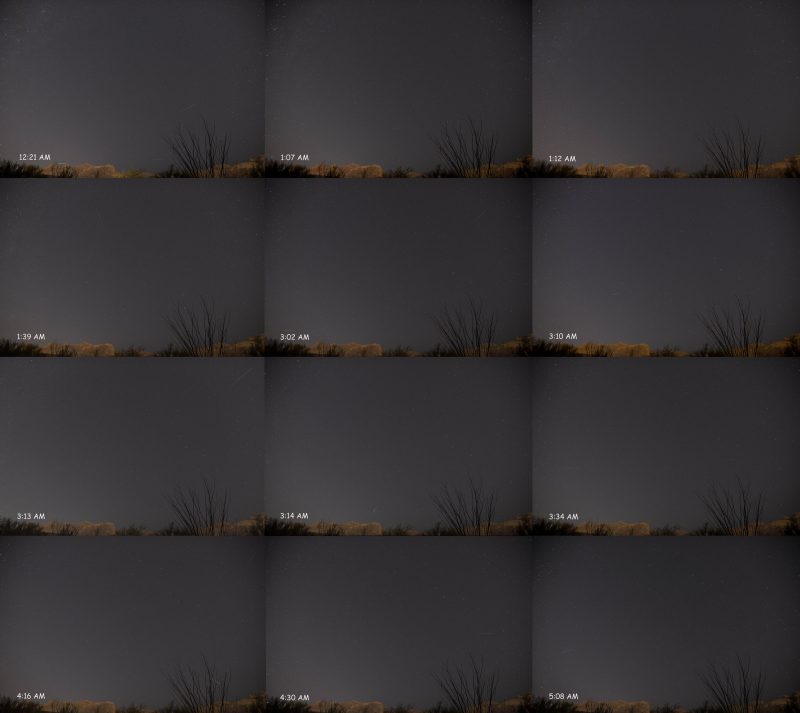 View larger. | Some years you win; others not so much. Veteran meteor photographer Eliot Herman in Tucson, Arizona, said he didn’t catch many meteors at the 2017 peak. He wrote: “It wasn’t very good last year for Ursids. I got about a dozen. Here they are.”

Ursa Minor is the constellation that contains the North Star, or Pole Star, called Polaris. From that alone, you know it’s a far-northern constellation. For this reason, the Ursids aren’t easily visible to observers in the Southern Hemisphere; their radiant point is just too far north.

If you want to try watching the Ursids in 2018, find a country location where you can camp out. Dress warmly! And plan to spend several hours reclining under a dark sky free of artificial lights, sometime during the night of December 21 (morning of December 22).

At very northerly latitudes – say, latitudes like that of the northern U.S. and Europe – the radiant of the shower is out all night. Should you try observing on the evening of December 21, or the evening of December 22? Up to you. Just know that the radiant point of the Ursid shower rises upward throughout the night, and reaches its highest point for the night just before dawn. 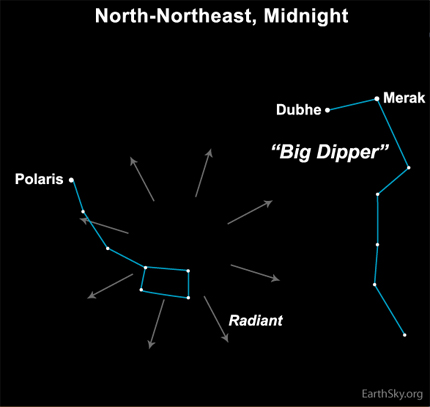 Ursid meteors radiate from very far north on the sky’s dome, near the Big and Little Dippers. This chart shows them around midnight, or when the Big Dipper is well up in the north-northeast.

No matter what time of year you look, the two outer stars in the Big Dipper’s bowl always point to Polaris, which marks the end of the handle of the Little Dipper.

By the way, meteors in annual showers nearly all stem from comets (the Geminids being a bizarre exception). Beginning around the 1970s, astronomers found evidence that the Ursids move in the same orbit as Comet 8P/Tuttle, which is now believed to be the meteors’ source.

Bottom line: We anticipate the Ursid meteor shower will peak in 2018 on the morning of December 22, though under the glaring light of the full moon.