Some extremely large and hot stars blaze away with the luminosity of a million suns! But other stars look bright only because they’re near Earth.

This Renaissance woodcut is called Empedocles Breaks through the Crystal Spheres.

The ancient astronomers believed the stars were attached to a gigantic crystal sphere surrounding Earth. In that scenario, all stars were located at the same distance from Earth, and so, to the ancients, the brightness or dimness of stars depended only on the stars themselves.

In our cosmology, the stars we see with the eye alone on a dark night are located at very different distances from us, from several light-years to over 1,000 light-years. Telescopes show the light of stars millions or billions of light-years away. 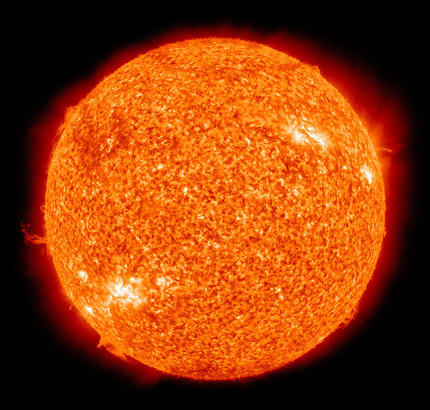 Astronomers often list the luminosity of stars in terms of solar luminosity. The sun has a radius of about 696,000 kilometers, and a surface temperature of about 5800 Kelvin, or 5800 degrees above absolute zero. Freezing point of water = 273 Kelvin = Oo Celsius

For instance, nearly every star that you see with the unaided eye is larger and more luminous than our sun. The vast majority of stars that we see at night with the eye alone are millions – even hundreds of millions – of times farther away than the sun. Regardless, these distant suns can be seen from Earth because they are hundreds or thousands of times more luminous than our local star.

That’s not to say that our sun is a lightweight among stars. In fact, the sun is thought to be more luminous than 85% of the stars in our Milky Way galaxy. Yet most of these less luminous stars are too small and faint to see without an optical aid.

We can calculate the star’s luminosity – relative to the sun’s – with the following equation, whereby L = luminosity and R = radius: 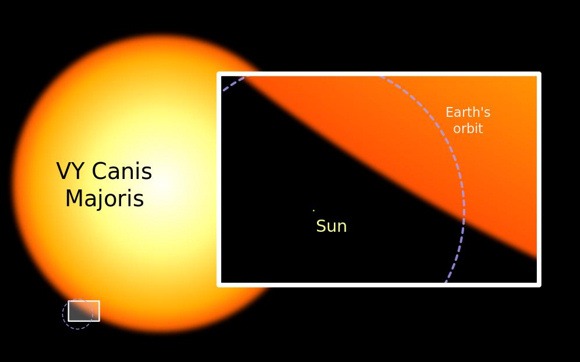 Although the star VY Canis Majoris in the constellation Canis Major has a much cooler surface temperature than our sun, this star’s sheer size makes it a super-luminous star. Its radius is thought to be around 1400 times than of our sun, and its luminosity 270,000 greater than our sun. 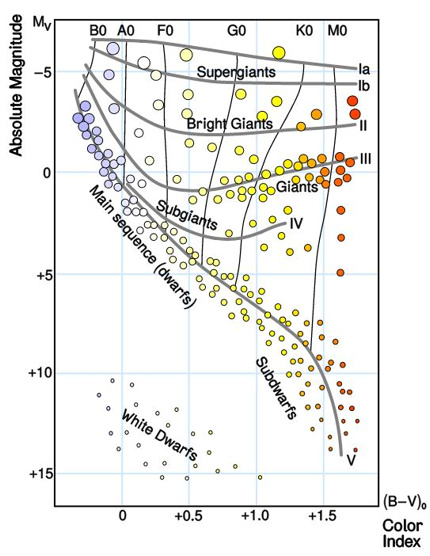 Have you ever noticed that stars shine in an array of different colors in a dark country sky? If not, try looking at stars with binoculars sometime. Color is a telltale sign of surface temperature. The hottest stars radiate blue or blue-white, whereas the coolest stars exhibit distinctly ruddy hues. Our yellow-colored sun indicates a moderate surface temperature in between the two extremes. Spica serves as prime example of a hot blue-white star, Altair: moderately-hot white star, Capella: middle-of-the-road yellow star, Arcturus: lukewarm orange star and Betelgeuse: cool red supergiant.

How astronomers learn the masses of double stars

Bottom line: Some extremely large and hot stars blaze away with the luminosity of a million suns! But other stars look bright only because they’re near Earth. Astronomers call the true, intrinsic brightness of a star its luminosity.