Altair: Bright star of the Eagle

Altair is only 16.8 light-years from Earth, making it one of our closest stellar neighbors. At least 2 features of the star make it distinctive. For one thing, Altair needs only 10 hours to spin once on its axis, in contrast to roughly a month for our sun. 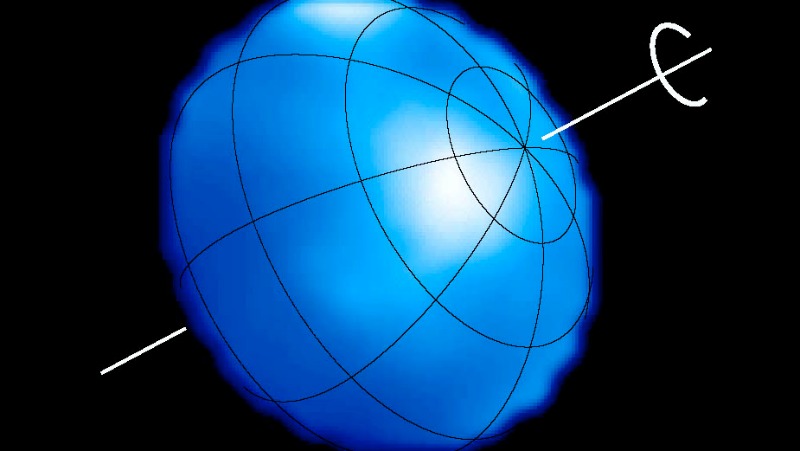 Hot, rapidly rotating star Altair, showing surface features and the fact that Altair’s fast rotation has flattened it. In other words, it is wider than it is tall. Image via ing Zhao/ a href=”https://dept.astro.lsa.umich.edu/~monnier/Altair2007/altair2007.html” target=”_blank” rel=”noopener noreferrer”>MUniversity of Michigan.

Altair is only 16.8 light-years away from Earth, making it one of our nearest stellar neighbors. At least two features of the star Altair make it distinctive.

First, Altair rotates rapidly. This star requires only about 10 hours to spin once on its axis, in contrast to 24 hours for our Earth to spin or roughly a month for our sun. In other words, this mighty star spins on its axis more rapidly than Earth! This rapid rotation tends to flatten the star a bit, much as a pizza crust flattens as it spins. Rough estimates are that Altair’s flattening is about 14%. The sun also is an oblate spheroid, although its flattening is difficult to measure due to the low rotation rate.

In 2007, University of Michigan astronomers combined light from four widely separated telescopes to produce the first picture (above) showing surface details on Altair. The researchers, led by John Monnier of U-M, used optical interferometry to get this image. Read more about the study here. 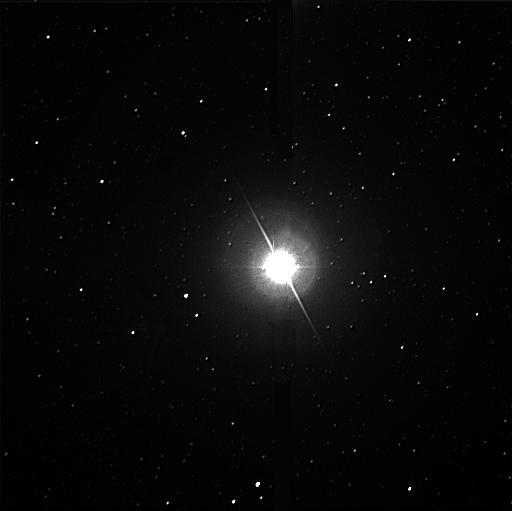 Second, Altair stands out because it is a weak and unusual variable star with as many as nine different rates of brightness waxings and wanings. The brightness variations are too small to measure without sensitive instruments, but likely are related to the star’s high rotation rate.

By the way, if Altair were substituted for our sun, at the distance the sun is now, life on Earth would be doomed, as Altair shines with 11 times the sun’s visible light. However, with a surface temperature of about 7,550 K degrees (13,130 Fahrenheit or 7,277 Celsius), Altair isn’t much hotter than the sun at 5,800 K (9,980 F or 5,527 C). Higher temperatures usually reveal greater mass, at least for main sequence stars, and Altair is thought to be in excess of 1.7 times the mass of our sun.

How to see it

Altair is the 12th brightest star, and so it is respectably bright (apparent magnitude 0.76 or 0.77), a fact that increases your likelihood of spotting it in summer or autumn skies. What’s more, Altair is flanked by two other stars, Tarazed and Alshain. When you see them, you might think of these stars as walking three abreast and arm-in-arm across the heavenly sphere. 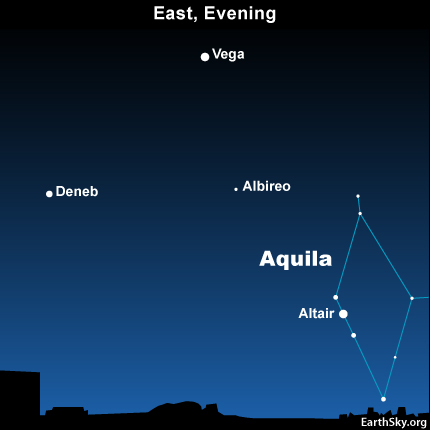 The bright star Altair is part of the famous Summer Triangle asterism, consisting of 3 bright stars (Vega, Deneb and Altair) in 3 different constellations. You can recognize Altair because it has 2 fainter stars on either side of it. Read more about the Summer Triangle.

Altair is also known as Alpha Aquilae, and it is the brightest star in the constellation Aquila the Eagle.

What’s more, stargazers know Altair as part of an entirely different and much larger – but very recognizable – pattern. Altair is the southern apex of the Summer Triangle, which is also composed of the stars Vega and Deneb.

On the first of June, Altair rises about 90 minutes after sunset, as viewed from mid-northern latitudes. By the end of September it approaches the meridian as night falls. By the end of the year, late-night observers will miss it altogether as it sets less than three hours after the sun.

Many depictions place Altair as the head or neck of an eagle with outstretched wings. The tips of the wings are formed by the Theta and Zeta stars of the constellation Aquila the Eagle, with the tail being Lambda. Once visualized, Aquila the Eagle can be seen flying eastward through the Milky Way, apparently about to devour the tiny constellation Delphinus, the Dolphin.

The name Altair is Arabic in origin and has the same meaning as the name of the constellation Aquila in Latin; that is, they both mean simply “eagle.” 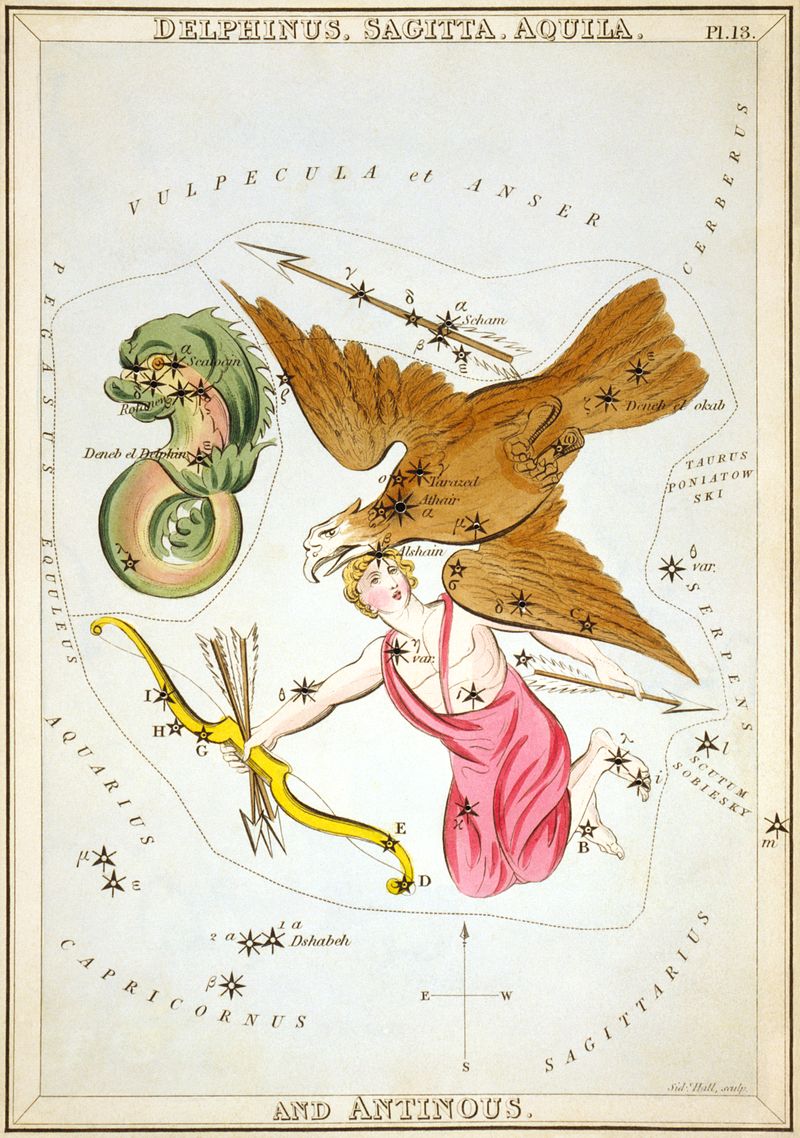 Altair of Aquila the Eagle, with two smaller constellations nearby. Image via Wikipedia.

In classical mythology Aquila, and by extension Altair as well, was an eagle favored by Zeus. He played a part in numerous myths, including the abduction of Ganymede in which a young boy (Ganymede) is carried off to Mount Olympus on Zeus’ command to become the cupbearer to the gods. In another myth Aquila is the eagle that torments Prometheus, and is shot with a poisoned arrow by Hercules.

In India, Altair with its two flanking stars, Beta and Gamma (Tarazed and Alshain), are sometimes thought to be the celestial footprints of the god Vishnu.

Altair is separated from the similar-looking (but brighter) star Vega in the constellation Lyra by the great starlit band of the Milky Way. In Asia, this hazy band across our sky is known as the Celestial River. One story common in China, Japan and Korea is of a young herdsman (Altair) who falls in love with a celestial princess (Vega), who weaves the fabric of heaven. The princess became so enamored of the herdsman that she neglects her weaving duties. This acts enrages the princess’s father, the Celestial Emperor, who decrees that the herdsman must stay away from his daughter, on the opposite side of the River. The Emperor finally listened to the princess’s pleas, however, and allowed the herdsman to cross the Celestial River once per year, on the seventh day of the seventh month.

In Japan, Altair is Hikoboshi, and Vega is Orihime (or Tanabata). If it rains on the day of the festival of Tanabata, it is said to be Orihime’s tears because Hikoboshi could not navigate the treacherous waters of the Celestial River.

Bottom line: Altair is the brightest star in the constellation Aquila, and one of the closest stars to our solar system.