Gemini twins are triplets on March 5 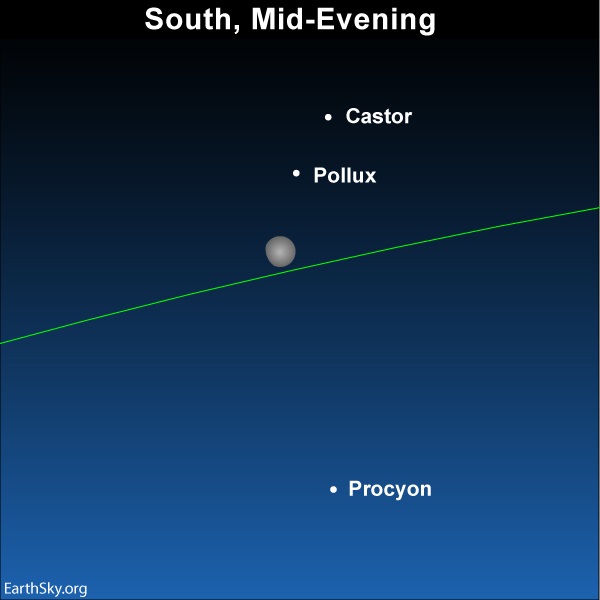 As darkness falls on March 5, 2020, look for the waxing gibbous moon high in the east. Until the wee hours on Friday, March 6, when it sets, the moon will appear near the constellation Gemini’s two brightest stars – sometimes called the Gemini twins, even though they don’t look alike – Castor and Pollux. They will be to the north of the moon, near it, so that the Gemini twins temporarily become triplets on this night, with the moon as the third sibling.

Then look to the south of the moon for another bright star, Procyon, also known as the Little Dog Star because it’s the brightest light in the constellation Canis Minor the Lesser Dog.

All these stars are bright. You should be able to see them, even in tonight’s moonlit glare.

The Winter Circle (or Hexagon) contains another pattern known as the Winter Triangle. Image via SouledOut.org.

At nightfall from the world’s Eastern Hemisphere – Europe, Africa, Asia, Indonesia, Australia and New Zealand – the moon will be offset somewhat to the west of where it appears relative to these stars in North America.

Hint: the moon’s illuminated side points westward and its dark side eastward.

Of course, if you’re in the Southern Hemisphere, keep in mind that you’ll be seeing this sky scene upside-down from our northerly perspective. Literally, you can hold the chart at the top of this post upside-down. You’ll be looking in your northern sky instead of your southern sky. Procyon will be above the moon while the Gemini stars, Castor and Pollux, will be below the moon. 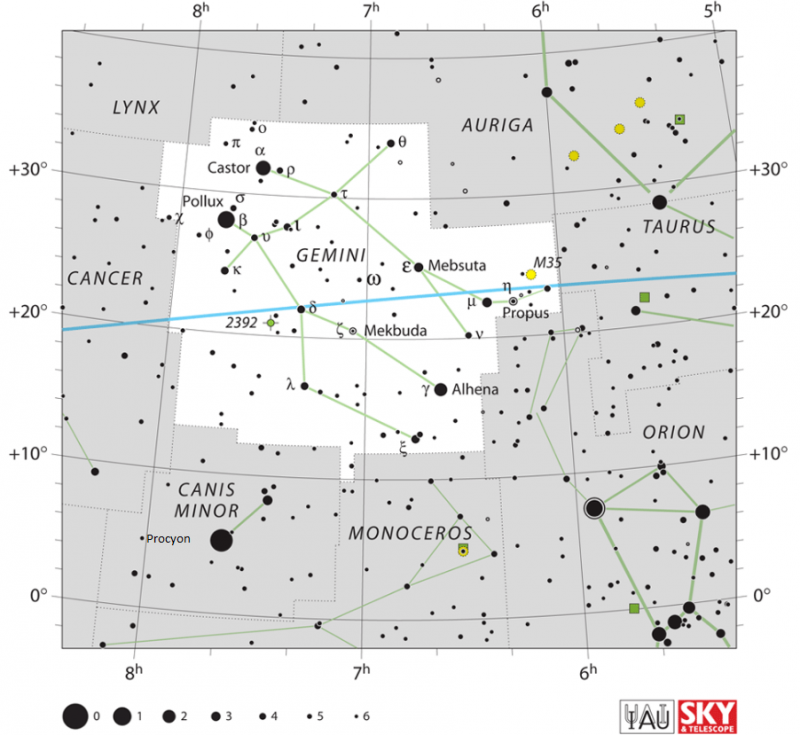 Sky chart of Gemini via the International Astronomical Union (IAU). This is a Northern Hemisphere view of the constellation Gemini at its high point in the southern sky. From the Southern Hemisphere, you’d see this sky scene upside-down in your northern sky, with Procyon at top and the Gemini stars, Castor and Pollux, beneath Procyon.

In the Southern Hemisphere, this method also works for finding your north and south directions. But from that part of the world, Polaris lies due north, yet beneath the northern horizon.

Bottom line: On March 5, 2020, use the waxing gibbous moon to find the Gemini stars, Castor and Pollux, and Procyon, the Little Dog Star.