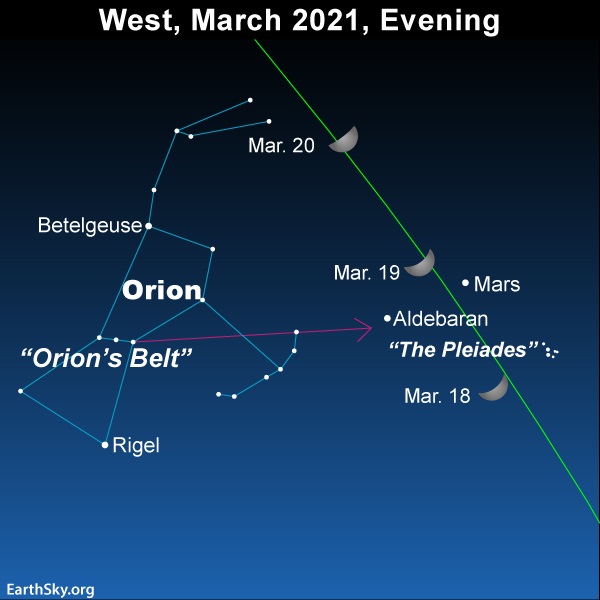 On March 18, 19 and 20, 2021, watch the waxing crescent moon as it travels in front of the constellation Taurus the Bull. As the moon goes eastward through the Bull, it’ll pass to the south of the Pleiades star cluster on March 18 (as viewed from North America). Roughly a day later, the moon will then swing between the ruddy star Aldebaran and the red planet Mars. Aldebaran, which is a bit brighter than Mars, is the brightest star to light up the constellation Taurus.

Of course, when the moon is no longer there to guide you – or even if it is – you can always use the famous asterism known as Orion’s Belt as your guide. Orion’s Belt consists of three medium-bright stars in a short, straight row. These three stars point to the constellation Taurus, as shown on our sky chart. This cool trick works anywhere worldwide.

By March 21, 2021, the first quarter moon will have left the constellation Taurus to enter into the constellation Gemini the Twins. Want to know which constellation of the zodiac backdrops the moon right now? Or for any given time and date? This information is available at your fingertips, via Heavens-Above.

The moon travels more quickly through the constellations of the zodiac than does any other celestial body. The moon takes about 27 1/3 days to go full circle through the zodiac. 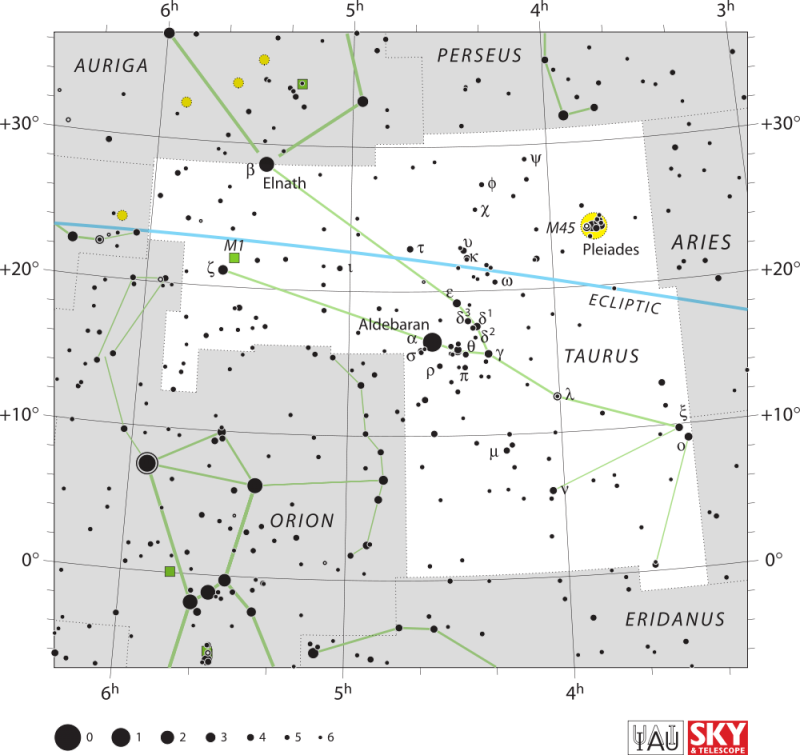 The 3 stars at the midsection of Orion – called the Belt of Orion – always point to the bright red star Aldebaran, in the V-shaped head of Taurus the Bull. Chart via Wikipedia.

So, for the next month or so, star-hop from Orion’s Belt to Taurus to witness Mars’ passage in front of this signpost constellation. By April 24, 2021, Mars will have left the constellation Taurus and entered the constellation Gemini the Twins. Want to know which constellation of the zodiac backdrops Mars right now? Or for any given time and date? This information is also available via Heavens-Above.

Bottom line: Let the moon introduce you to the constellation Taurus the Bull on the evenings of March 18, 19 and 20, 2021.