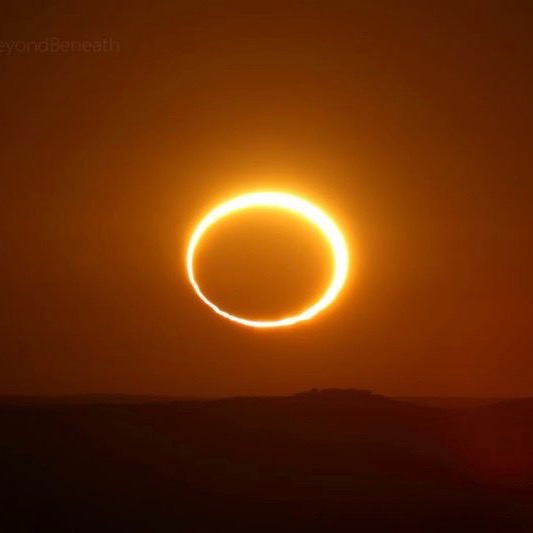 Above: An annular solar eclipse – now often called a ring of fire eclipse – caught by Geoff Sims on May 10, 2013. The “fire” is really the sun’s brilliant surface, shining behind the moon in the far part of its orbit around Earth. 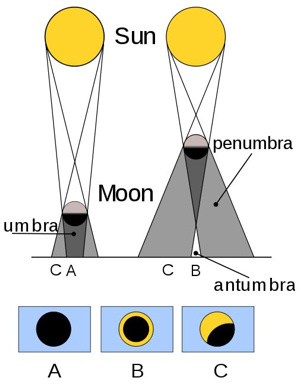 We refer you to the map (and animation) of the December 26th annular eclipse below. The narrow red ribbon outlines the narrow path of the annular eclipse, starting at sunrise in Saudi Arabia (at left) and then ending at sunset over the North Pacific Ocean (at right). It takes the moon’s antumbral shadow some 3 1/3 hours to traverse this 8,000 mile (12,900 km) annular eclipse path, which has a width varying from 73 miles (117 km) wide at the path’s center to 100 miles (over 160 km) wide at the path’s beginning and ending points. 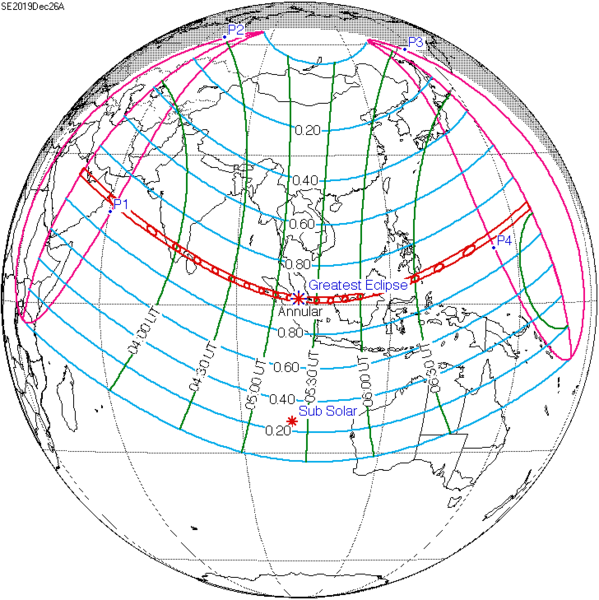 The narrow annular eclipse path (in red) starts at sunrise at left ,over Saudi Arabia. and ends at sunset at right over the North Pacific ocean. The annular eclipse takes 3 1/3 hours to traverse this 8,000 mile (12,900 km) path. At any one point on the path, however, the maximum duration of the annular eclipse is only 3 2/3 minutes. Visit EclipseWise.com for an extended version of the above map, or see TimeAndDate.com for a detailed map and local eclipse times.

Animated version of the above map. The small dot depicts the path of the annular eclipse, whereas the much larger circle surrounding the small dot shows the viewing area for a partial solar eclipse.

The annular eclipse is visible from some parts of Saudi Arabia, Qatar, United Arab Emirates, Oman, India, Sri Lanka, Malaysia, Indonesia, Singapore, Northern Mariana Islands, and Guam. Outside the long and narrow road of the annular eclipse, a much broader swath of the world can watch varying degrees of a partial eclipse. The farther north or south you are from the annular eclipse path, the shallower the partial solar eclipse in your sky. The numbers on the map (0.80, 0.60, 0.40, 0.20) tell you the eclipse magnitude – the portion of the sun’s diameter that is covered over by the moon. To find out if and when this eclipse comes to your part of the world, try the wonderful resources below, which give the eclipse times in local time (no conversion from Universal Time to local time is necessary):

If you live along the annular eclipse path, be mindful that a partial eclipse precedes and follows the short-lived annular eclipse. We give the eclipse times for some cities along the path of annularity in local time (no conversion necessary):

Six lunar months (six new moons) before this December 26th annular eclipse, there was a total eclipse of the sun on July 2, 2019. Back then, the new moon was some 10,000 miles (16,000 km) closer than the new moon of December 2019. Moreover, the sun in early July is about 3 million miles (5 million km) farther away than it is in late December. That all adds up to a total solar eclipse on July 2 (maximum duration: 4 minutes and 33 seconds), yet an annular eclipse on December 26 (maximum duration: 3 minutes and 40 seconds).

The longest lasting total solar solar eclipses happen when the moon is near perigee (closest point to Earth in its monthly orbit) and the Earth is near aphelion (farthest point from the sun). The longest total solar eclipse of the 21st century (2001 to 2100) took place on July 22, 2009, with a duration of 6 minutes and 39 seconds. 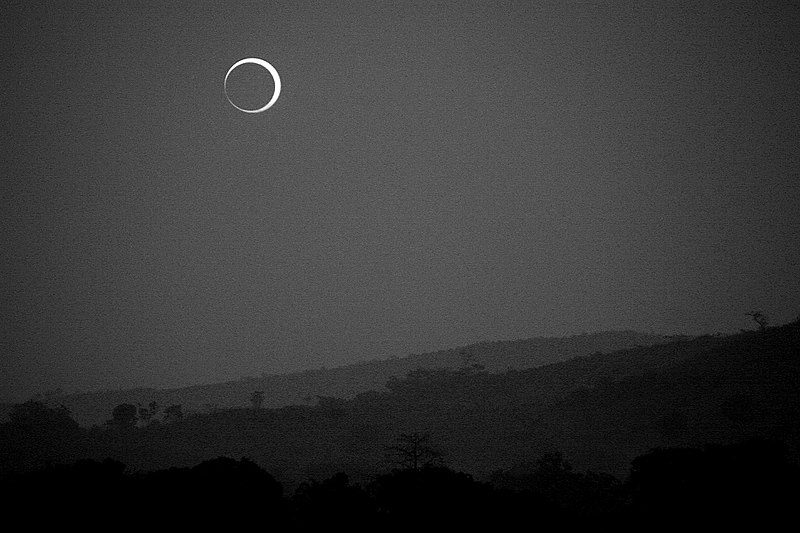 Correction: We mistakenly said in an earlier version of this article that – for an annular solar eclipse to occur – the new moon has to be near apogee, the farthest point in its orbit around Earth. The mistake was made in editing. As Bruce later pointed out, it’s true sometimes that – during an annular eclipse – the moon is near apogee. But that isn’t the case for the December 26 eclipse. In fact, the December new moon is almost exactly at its mean distance from Earth. Yet – at mid-eclipse – the moon is too small to cover the sun’s disk completely. Why? The answer is that – at this time of year – Earth is close to perihelion, its closest point to the sun for the year. In 2020, Earth’s perihelion will come on January 5 at 07:48 UTC (at 1:48 a.m. CST). So, in our sky around now, the sun’s disk appears slightly larger than usual: hence, the December 26, 2019, annular solar eclipse. Cool, yes? Now consider this: the longest-lasting annular eclipses do occur when the moon is near apogee and the Earth is near perihelion. The annular eclipse on December 26 is not a particularly long-lasting annular eclipse.

Bottom line: The 3rd and final solar eclipse of the year falls on December 26. It’s 2019’s only annular or “ring of fire” eclipse. At mid-eclipse, a ring of the sun’s surface will appear around the moon.