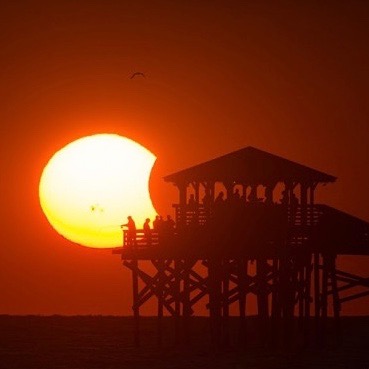 2019’s first new moon falls on January 6 at 01:28 UTC. This new moon will pass between the Earth and sun, to stage a partial eclipse of the sun. It happens on the night of January 5 for time zones in the Americas, and thus we won’t see it (except for a tiny section of Alaska, shortly before sunset January 5). But – if you do reside at the right spot on the globe – you can see the moon taking a bite out of the solar disk.

Just be sure to use proper eye protection when watching this or any eclipse!

The eclipse will be visible from Asia (China, Korea, Japan, Russia, North Pacific Ocean and Alaska’s Aleutian Islands). Depending on where you live within the eclipse viewing area, this eclipse will happen during the daylight hours on January 5 or 6. We refer you to the eclipse animation and map below. 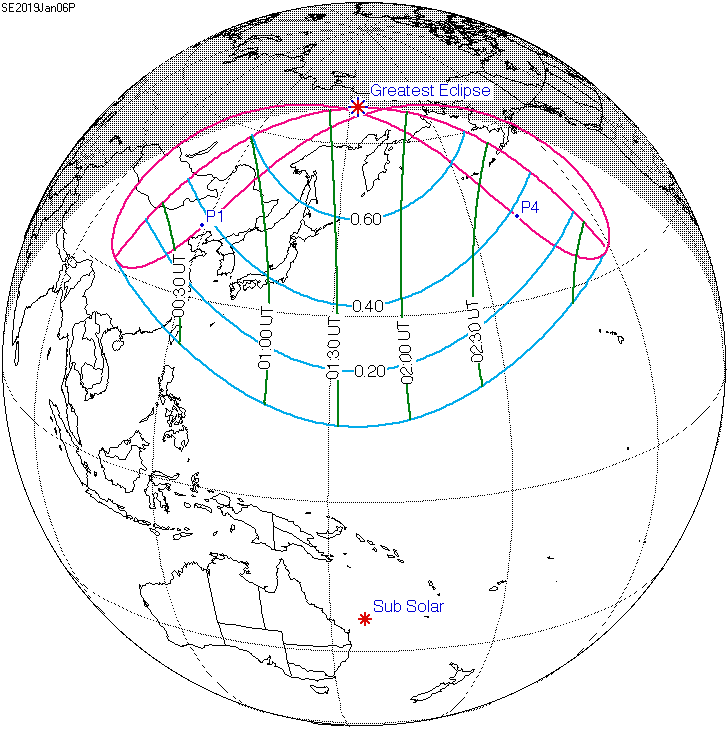 From a global perspective, the partial eclipse starts in Asia at sunrise and ends some 4 1/4 hours later at sunset. Eclipse map via NASA.

The January 6, 2019, partial solar eclipse starts at sunrise in Asia, then travels rapidly eastward for roughly 4 1/4 hours, finally ending at sunset in the Aleutian islands extending from Alaska. The animation above shows the eclipse viewing area as a shaded and somewhat misshapen circle moving across Earth’s daytime side.

Anyone within the moon’s penumbral shadow will see varying degrees of a partial eclipse. If you live within the eclipse viewing area, click here for eclipse times via EclipseWise or this interactive map via Time.Unitarium.com.

A solar eclipse always happens within one fortnight (approximately two weeks) of a lunar eclipse. Sure enough, later this month – on the night of January 20-21, 2019 – there will be a total eclipse of the moon, visible in the Americas, Europe, Africa and the Middle East.

One fortnight (or 1/2 lunar month) following the year’s final eclipse on 2019 December 26 will bring about the first eclipse of 2020 on January 10, 2020. But since this eclipse will be a difficult-to-see penumbral eclipse of the moon, chances are that it’ll pass without any fanfare.

The partial solar eclipse on January 5-6, 2019, is visible within the eclipse viewing area, but must be watched with proper eye protection.

Bottom line: The new moon falling on January 6, 2019, at 01:28 UTC will pass between the Earth and sun, to stage a partial eclipse of the sun, visible from Asia.