A total eclipse of the sun is coming to the South American countries of Chile and Argentina in the late afternoon hours on July 2, 2019.

Above: Beverley Sinclair’s photo of the solar eclipse on August 21, 2017, highlighting the diamond ring effect.

We refer to the map below. Outside the narrow path of totality (in blue) that swings over the South Pacific Ocean and southern South America, a much broader swath of the Pacific, South America and southern Central America sits beneath the moon’s penumbral shadow, to undergo a partial eclipse of the sun. It’ll be an exceedingly shallow solar eclipse for southern Central America, however. Be sure to use proper eye protection any time the sun is not eclipsed or in any stage of a partial eclipse (even when it’s over 99 percent but less than 100 percent eclipsed)! 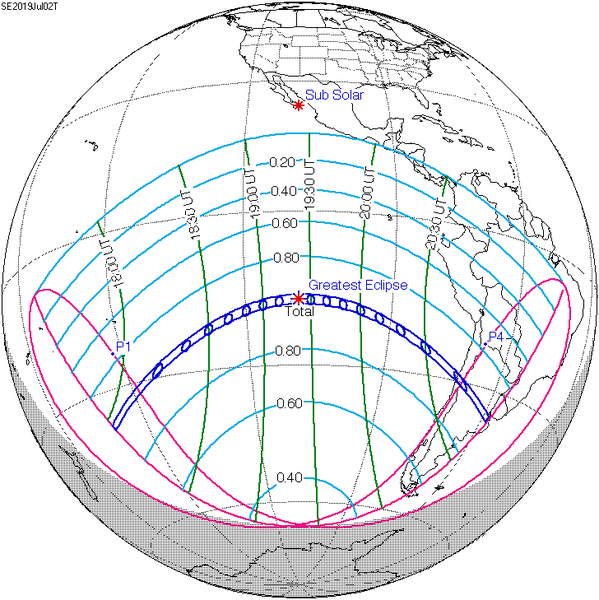 The narrow dark blue corridor depicts the path of totality; you must be on that path to see a total eclipse. The broader swath shows varying degrees of a partial solar eclipse. The numbers (0.80 to 0.20) indicate how much of the sun’s diameter is covered over by the moon. The total eclipse will start at sunrise, at left, and – some 2 2/3 hours later – it’ll end at sunset over eastern Argentina. The path of totality is approximately 7,000 miles (11,200 km) long. The maximum path width is 125 miles (201 km).

An animated version of the above map whereby the small black dot depicts totality. The large gray circle shows the region of a partial eclipse of the sun.

Unless you’re on a cruise ship, or perhaps an airplane, you can only watch the total solar eclipse from Chile or Argentina in South America. Oneo, a small and uninhabited atoll of the Pitcairn Islands, is the only Pacific island where the total solar eclipse is visible, starting at 10:24 a.m. local time (18:24 Universal Time). Totality lasts for 2 minutes and 53 seconds. Numerous Pacific islands, on the other hand, can observe a partial solar eclipse – but, once again, we stress the need for proper eye protection. 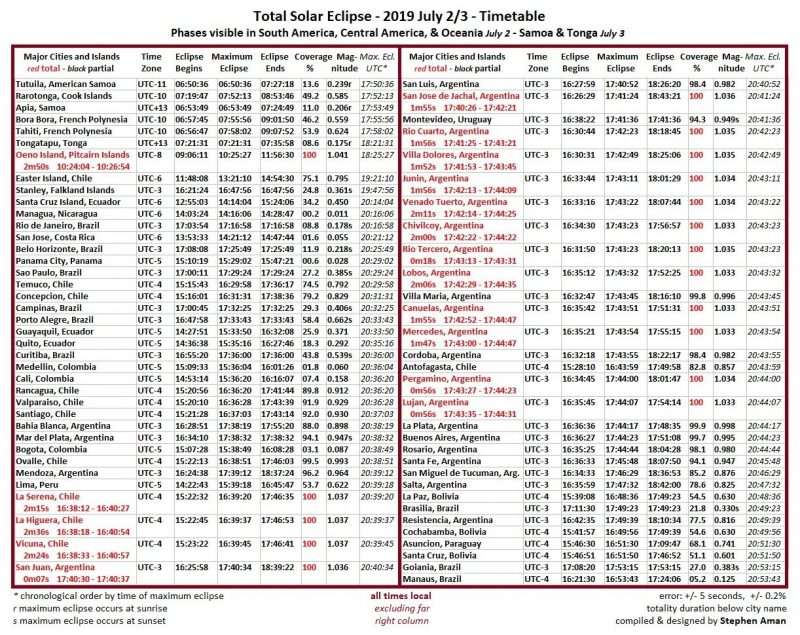 View larger. | Stephen Aman in Orlando, Florida, kindly provided this chart of eclipse times for all major cities and islands that lie in its path. Thank you, Stephen!

We expect eclipse chasers to flock to the big cities of Santiago, Chile, and Buenos Aires, Argentina, in their quest to witness the most spectacular of natural wonders, a total eclipse of the sun. It’s been said that on a scale of one to ten, a total solar eclipse rates a million! After seeing a total solar eclipse for the first time in Wyoming on August 21, 2017, I have to agree with the assessment. If you live in South America and are within traveling distance of totality, by all means take the trip. It’s an experience that’ll live with you for the rest of your days. 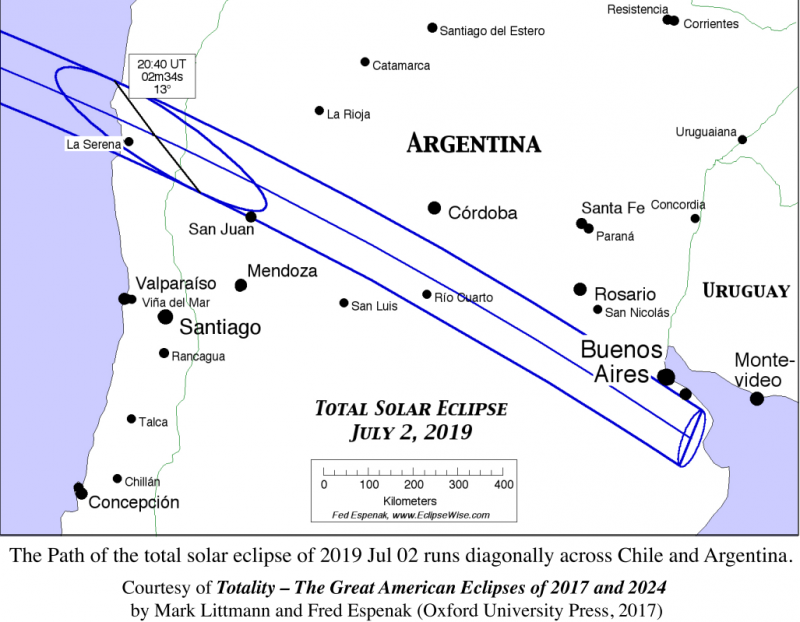 View larger. Zooming in on the path of totality going through Chile and Argentina via Mark Littmann and Fred Espenak.

If you want to find out when (or if) this eclipse happens in your sky, click on either one of the above links or this Google map. 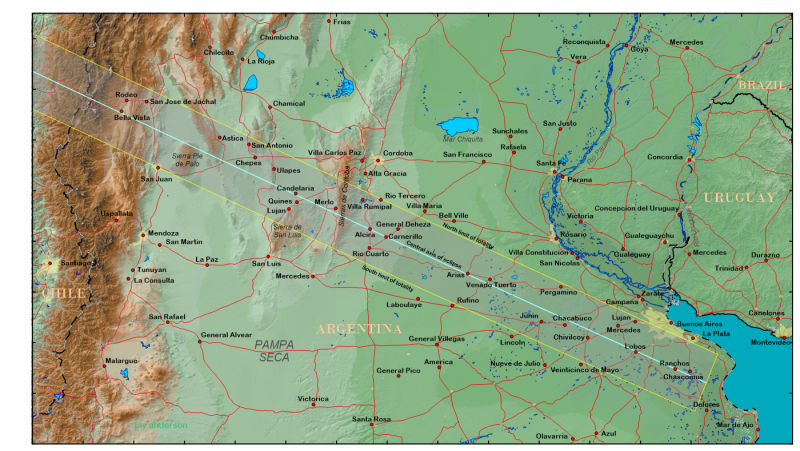 View larger. Map of total eclipse path through Argentina via Eclipsophile. Along the central line of the total eclipse path, totality lasts for about 2 minutes at the beginning and end points, and around 4 1/2 minutes around the midpoint. Click here for details.

A solar eclipse is only possible at new moon, when the moon in its orbit swings between Earth and the sun. Then the moon blocks out the solar disk, either partially or totally, as viewed from a portion of the Earth’s surface. More often than not, however, no solar eclipse happens at new moon, because the new moon swings to the north or south of the sun. Despite having 13 new moons in 2019, there are only three solar eclipses:

Read more: Why no eclipse at every full and new moon? 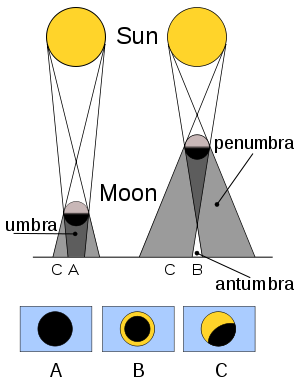 The upcoming total solar eclipse on July 2, 2019, depends on more than the fortuitous alignment of the new moon with the Earth and sun. For a total solar eclipse to occur, the angular diameter of the moon has to exceed that of the sun. During this eclipse, the new moon comes considerably closer than its average distance from Earth. Yet, at the same time, the Earth is only a few days shy of reaching its farthest point from the sun.

The closer moon makes the new moon appear larger, whereas the more distant sun makes the sun appear smaller. Because the new moon looms larger than the sun in Earth’s sky, the moon totally covers over the solar disk during the total solar eclipse of July 2, 2019. 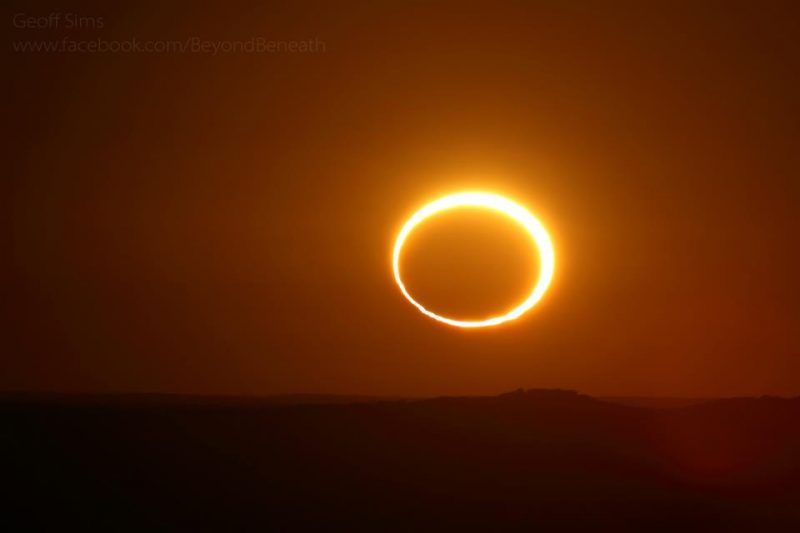 Annular solar eclipse – called a “ring of fire” eclipse – captured by photographer Geoff Sims on May 10, 2013. Used with permission.

Six lunar months (six new moons) after the total solar eclipse on July 2, 2019, the year’s final solar eclipse will fall on December 26, 2019. But this time around, the December 2019 new moon will be about 10,000 miles (16,000 km) farther than the new moon of July 2019. Also, the sun will be about 3 million miles (5 million km) closer than it was in July 2019. On December 26, 2019, the smaller new moon won’t be able to totally cover over the larger solar disk, so a ring of sunshine will surround the new moon silhouette, to showcase an annular eclipse of the sun.

Bottom line: A total eclipse of the sun is coming to the South American countries of Chile and Argentina in the late afternoon hours of July 2, 2019.