What is a runaway star?

For the most part, stars in our Milky Way galaxy move in a more or less orderly way. But some stars are runaways. 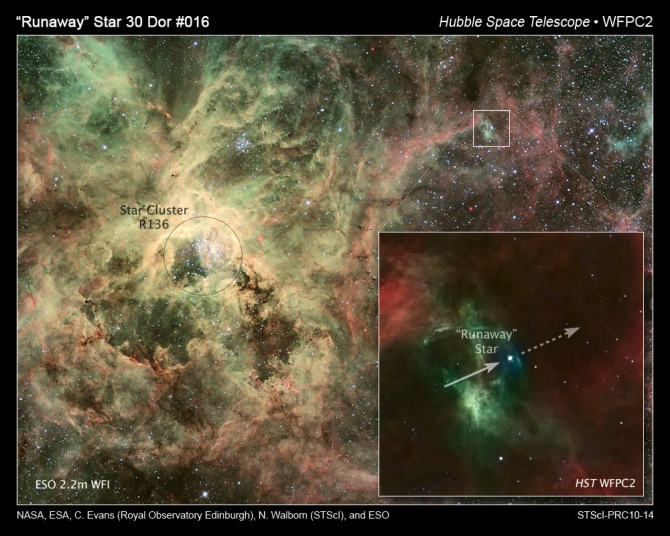 This Hubble Space Telescope image shows a cloud in space where new stars are forming – called 30 Doradus – aka the Tarantula Nebula. The enlarged inset shows a star that appears to have been kicked out of the nebula. In the inset, an arrow points to the stellar runaway and a dashed arrow to its presumed direction of motion. Read more about this image from NASA.

The sun and all of the Milky Way’s stars are moving in orbit around the center of our galaxy. It’s more or less orderly, but there are local movements within this general stream of stars, too. In recent decades, astronomers have identified some Milky Way stars that are moving faster than expected, or in a direction that seems unusual. They use the term runaway star to describe these renegades.

Stars are born in clouds of gas and dust. Multiple stars are born from a single cloud, and so many Milky Way stars move through space in loose associations, or more tightly bound open star clusters. By tracking the motions of a runaway star, astronomers can sometimes see which stellar association it once belonged to, before something happened to kick the star into fast motion, on a path through space different from its original cluster or association.

The first involves two binary star systems – two systems, each containing two stars – that pass close to each other. The encounter can disrupt both systems, so that one or more stars are ejected at relatively high speeds.

The second involves a supernova explosion in a multiple star system. These powerful explosions can propel associated stars that didn’t explode along new paths, at much-higher speeds.

One runaway star is GD 50, a white dwarf star with a bit more mass than our sun, but smaller than the Earth. A dime as dense as GD 50 would weigh 2,600 pounds (~1,200 kilos). GD 50 is located in our sky in the direction of the constellation Eridanus the River. But, around 2009, astronomers who’d been studying this star found that it moves through space in the same direction and at the same speed as the Pleiades star cluster, which is located not far from Eridanus on the sky’s dome. GD 50 is also about the same age as stars in the Pleiades. These astronomers concluded that GD 50 was born in the Pleiades, then flung out, possibly after passing too close to another star.

Another example of runaway stars is the case of AE Aurigae, 53 Arietis and Mu Columbae. They’re all moving away from each other at velocities of over 100 km/s (for comparison, our sun moves through the Milky Way at only about 20 km/s faster than the local average). Tracing their motions backwards on the sky’s dome, astronomers can see that – about 2 million years ago – the paths of these stars intersected near the Orion Nebula. There is a great loop or bubble of gas – called Barnard’s Loop – surrounding Orion’s three prominent Belt stars. Barnard’s Loop may be the remnant of the supernova that launched these stars as runaway stars. 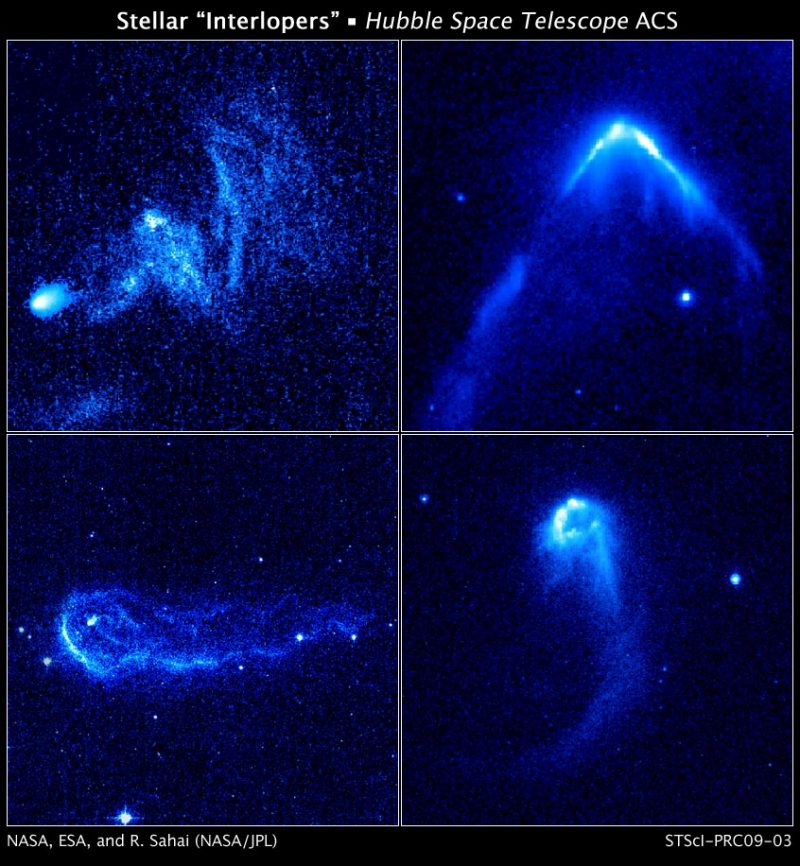 Four runaway stars plowing through regions of dense interstellar gas and creating bright bow waves and trailing tails of glowing gas. The stars in these NASA Hubble Space Telescope images are among 14 young runaway stars spotted by the Advanced Camera for Surveys between October 2005 and July 2006. Image via Wikimedia Commons.

Bottom line: Runaway stars move apart from the general stream of stars in our Milky Way. They might have been kicked from their original star clusters by encounters between two pairs of binary stars, or by a supernova explosion.