Barnard’s Loop and more in Orion

Orion the Hunter of one of the brightest and easiest-to-find constellations. Orion also contains a vast region of bright and dark clouds, hidden to the eye. 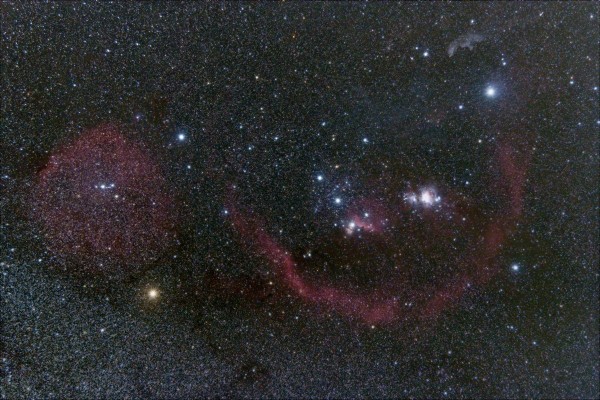 When you look at the sky at this time of year, one of the most prominent constellations you see is Orion the Hunter. It’s recognizable mainly for the short, straight row of three medium-bright “Belt” stars at its mid-section. See those stars on the photo above? Two very bright stars, Betelgeuse (left on this photo) and Rigel (right), lie on either side of the Belt stars. What you don’t see, with the eye alone, is the great complex of bright and dark nebulae – vast clouds drifting in our Milky Way – in and around Orion. That’s what Max Corneau has captured in this long-exposure (120 minutes) photograph.

This area in general is called the Orion Molecular Cloud Complex. And its most spectacular area may be the great loop of stars surrounding Orion’s three Belt stars. This great bubble in space is known as Barnard’s Loop, and its exact origin is unknown. Bright young stars in Orion may have produced “winds” that created it. Or long-gone supernovae may have blasted it out. No one knew this area of space existed until E. E. Barnard discovered the loop in 1894 on some of the first long-exposure photos.

Also in this image, to the right of the lowest star in Orion’s belt, you’ll see fuzzy area – really, a bright emission nebula that, when seen at higher magnification, resolves into the famous Horsehead Nebula.

To the right of the Belt stars is another fuzzy area. This is the beloved Orion Nebula.

Captured at my observatory, a SkyShed POD at the Texas Astronomical Society of Dallas dark sky sight.

Camera control by by BackYard EOS. Images calibrated, aligned and combined in Deep Sky Stacker with post-processing in Photoshop CS2.

Thank you, Max! Truly awesome part of the sky, and a beautiful capture.

Bottom line: Orion the Hunter of one of the brightest and easiest-to-find constellations. Orion also contains a vast region of bright and dark clouds, hidden to the eye. Barnard’s Loop is a great bubble surrounding Orion’s three prominent Belt stars. The whole structure is called Orion Molecular Cloud Complex.