Most of the planets in our solar system have some sort of atmosphere and many have dynamic weather systems. But only one moon in the solar system, Saturn’s large moon Titan, can say the same. 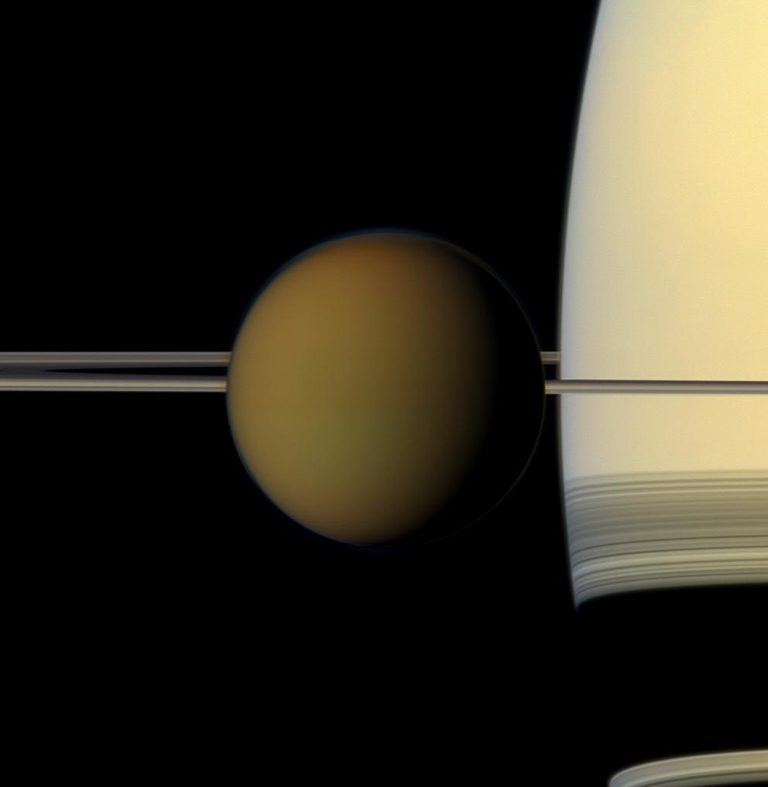 The Cassini spacecraft – which gave us dramatic images of Saturn and its rings and moons while orbiting this world from 2004 to 2017, caught this image of Titan in front of Saturn’s rings. The moon’s hazy atmosphere makes it appear like a fuzzy ball against the sharp rings of Saturn. Image via NASA/ JPL-Caltech/ Space Science Institute.

Titan is the largest moon of Saturn, the seventh planet outward from our sun. It’s the only moon in our solar system known to have a thick atmosphere, and it’s the only only known body in space, besides Earth, known to have stable bodies of surface liquid. Titan has a kind of hydrological cycle, much like Earth’s, with liquids falling from the sky and flowing across this moon’s surface before evaporating back into clouds. Some of the weather phenomena we’d be familiar with on Titan include dust storms and monsoonal rains. Earth’s atmosphere is 78% nitrogen; Titan’s is 98% nitrogen. Titan’s climate is driven by seasonal change. So you can see that, in some ways, the closest comparison to Titan’s atmosphere is the one we know best: Earth’s.

But there are also many differences between Earth and this distant Saturnian moon, showing how alien and strange it would be to experience the weather on Titan.

Titan is 10 times farther from the sun than Earth and receives 100 times less solar energy. It orbits roughly in the plane of Saturn’s equator, and its tilt relative to the plane of our solar system is about the same as Saturn’s. As on Earth, Saturn’s seasons – and Titan’s – are caused by their tilts, which cause the sun to strike the different hemispheres of these worlds more strongly or more weakly throughout Saturn’s year. Saturn takes 29 years to orbit the sun once; its year is 29 Earth-years long. Thus both Saturn and Titan have seasons lasting more than 7 Earth-years.

And so any given spot on Titan experiences a change in weather at a much slower pace than on Earth.

An equinox on Titan – when both hemispheres of this moon are receiving the sun’s rays about equally – occurs about every 15 years. The last Titan equinox was in 2009. We now know – thanks to the Cassini mission to Saturn, which arrived in 2004 and lasted until 2017 – that powerful wind storms roved across Titan around the time of its 2008 equinox, producing soot that fell like rain and creating dunes on Titan’s surface.

In general, it’s now thought that Titan’s winds flow in a pole-to-pole circulation for some 12 Earth years before taking a few years to transition to the opposite direction as winter changes to summer.

This animation is based on images captured by Cassini’s Visual and Infrared Mapping Spectrometer during several Titan flybys in 2009 and 2010. It shows clear bright spots appearing close to Titan’s equator around the time of its equinox, which scientists have interpreted as dust storms. The brightenings were visible for only a short period of time – between 11 hours to five Earth weeks – and cannot be seen in previous or subsequent images. Image via ESA/ NASA/ JPL-Caltech/ University of Arizona. 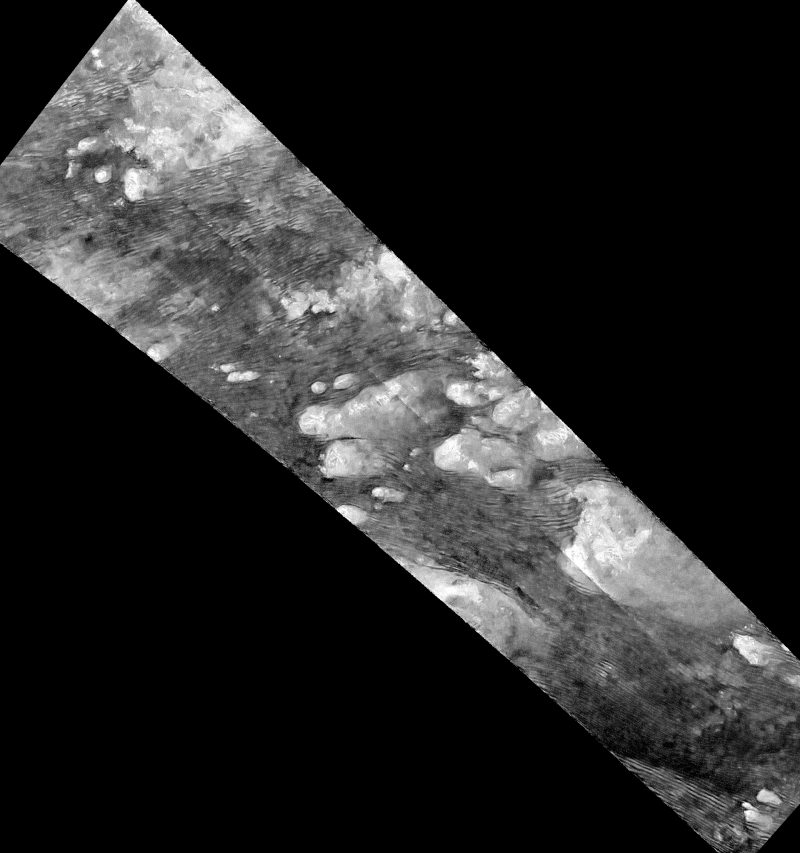 Soot deposited into dunes reveals the patterns of the wind on Titan’s surface. Image via NASA/ JPL-Caltech/ ASI/ Université Paris-Diderot.

Titan’s solstices come every 15 years, too. The last one was in 2017, bringing the longest day of summer to Titan’s northern hemisphere and the shortest day of winter to its southern hemisphere. NASA’s stated goal for Cassini’s second extended mission was to keep the spacecraft in orbit until the solstice, which happened in May of that year, and to observe seasonal changes in the Saturn system along the way. In fact, Cassini’s Solstice Mission was the name of Cassini’s second extended mission, which ended with a dramatic plunge of the spacecraft into Saturn’s clouds in September 2017.

And that’s why we know so much about the seasons, and the weather, on Titan!

Thanks to Cassini, we know that the clouds on Titan are composed mostly of methane and ethane, which are hydrocarbons. But it’s not just the clouds that are composed of methane. Lakes on Titan’s surface are made of methane too. Scientists believe that cryovolcanoes (ice volcanoes) erupt and spew methane into Titan’s atmosphere, which then rains down onto the surface, forming lakes.

Liquid methane is the dominant force behind Titan’s weather and surface erosion. During the Cassini mission, scientists saw ripples and waves on the surface of Titan’s lakes, indicating that winds may be stronger during Titan’s summer. And, by the way, because Titan is a less massive world than Earth, with weaker gravity, waves on its surface lakes would be seven times taller and three times slower! 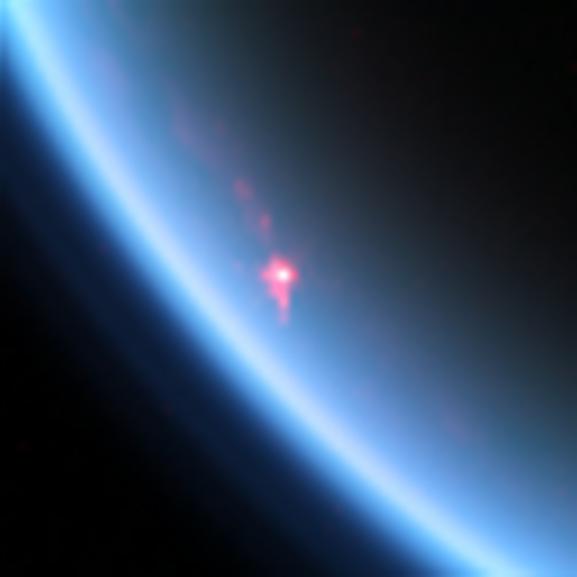 This near-infrared color image shows reflection off of a hydrocarbon lake on Titan. The bright white area is the glint off the lake. The pink is haze illuminated from below by reflection off the lake. The faint pink color coming from just above the reflection has been suggested to represent the first waves seen on Titan, and thus the first sea-surface waves ever detected outside Earth. Image via NASA/ JPL-Caltech/ University of Arizona/ University of Idaho.

Titan’s rains, when they fall, appear to have a monsoon-like effect on the surface, with downpours that shape alluvial fans. Alluvial fans are roughly triangular features made of sediments deposited by flowing water or even glaciers. These landform features are seen on places such as Titan, Earth and Mars.

Yet Titan’s downpours are rare. They probably only occur once every Titanian year, or once every 29 Earth-years.

In 2016, Cassini imaged a shiny spot covering more than 46,000 square miles (120,000 square km) that had not been in previous images and was not seen in subsequent images. It appears that Cassini caught freshly fallen liquid-methane rain that then drained into a nearby lake, Kraken Mare. This lake, which had been discovered by Cassini in 2008, is the largest body of surface liquid on Titan.

One unique feature of Titan’s atmosphere is that – with its combination of raindrops and sunlight – it should have occasional displays of rainbows. Because the raindrops on Titan are made of methane, and refraction for liquid methane differs from water, the rainbows would be larger than what we see on Earth. Sunlight does not penetrate the atmosphere easily due to Titan’s thick haze; however, another type of rainbow would actually be more common: an infrared rainbow.

Titan’s atmosphere is mostly clear at infrared wavelengths (this is why Cassini could easily see surface features on Titan with its infrared camera). Visitors to Titan could view these infrared rainbows with night-vision goggles.

Our views of Titan before Cassini showed just its hazy atmosphere, obscuring the surface and any possible activity on the ground. The mission not only peeled back this layer of atmosphere while analyzing its elements and interactions, but it also showed us the effect that atmosphere has on this moon’s surface.

Bottom line: Titan is the only moon in the solar system with a thick atmosphere. It has four seasons as Earth does, and a cycle similar to Earth’s hydrological cycle.