Posted by Deborah Byrd and Eleanor Imster in Space | September 26, 2018

Using data from the Cassini spacecraft, whose mission to Saturn ended a year ago, scientists now say they can see dust storms moving across the surface of Titan, Saturn’s largest moon. 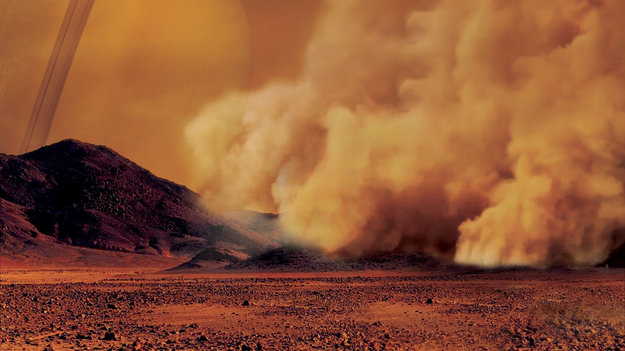 Artist’s concept of a dust storm on Titan. Image via ESA.

Only two worlds in our solar system, Earth and Mars, were known to have dust storms. Now a third world – the largest moon of the giant planet Saturn – has been found to have dust storms, too. The data come from the long-lived and much-loved Cassini spacecraft, which orbited Saturn, weaving among its many moons, between 2004 and 2017. Cassini changed our view of Titan from a world shrouded in mystery (it has a very thick atmosphere) to one where Nature seems at once familiar and exotic. More about that below. The newly discovered dust storms appear to be huge. They appear to be moving in the region around Titan’s equator. The discovery is described in the September 24, 2018, edition of the peer-reviewed journal Nature Geoscience.

Sébastien Rodriguez, an astronomer at the University Paris Diderot, France, led the study and commented in a statement:

Titan is a very active moon.

We already know that about its geology and exotic hydrocarbon cycle [analogous to Earth’s water cycle]. Now we can add another analogy with Earth and Mars: the active dust cycle.

This animation is based on images captured by Cassini’s Visual and Infrared Mapping Spectrometer during several Titan flybys in 2009 and 2010. It shows clear bright spots appearing close to Titan’s equator around the time of its equinox, which scientists have interpreted as dust storms. The brightenings were visible for only a short period of time – between 11 hours to five Earth weeks – and cannot be seen in previous or subsequent images. Image via NASA/JPL-Caltech/University of Arizona/University Paris Diderot/IPGP/S. Rodriguez et al. 2018.

Titan is an intriguing world – in a way quite similar to Earth. In fact, it is the only moon of the solar system with a substantial atmosphere and the only celestial body other than our planet where stable bodies of surface liquid are known to still exist.

There is one big difference though: while on Earth such rivers, lakes and seas are filled with water, on Titan it is primarily methane and ethane that flow through these liquid reservoirs. In this unique methane cycle, the hydrocarbon molecules evaporate, condense into clouds and rain back onto the ground.

The weather on Titan varies from season to season, just as it does on Earth. In particular around the equinox, the time when the sun crosses Titan’s equator, massive clouds can form in tropical regions and cause powerful methane storms. Cassini observed such storms during several of its Titan flybys.

When Sébastien and his team first spotted three unusual equatorial brightenings in infrared images taken by Cassini around the moon’s 2009 northern equinox, they thought these might be exactly such methane clouds.

A thorough investigation revealed they were something completely different, however. 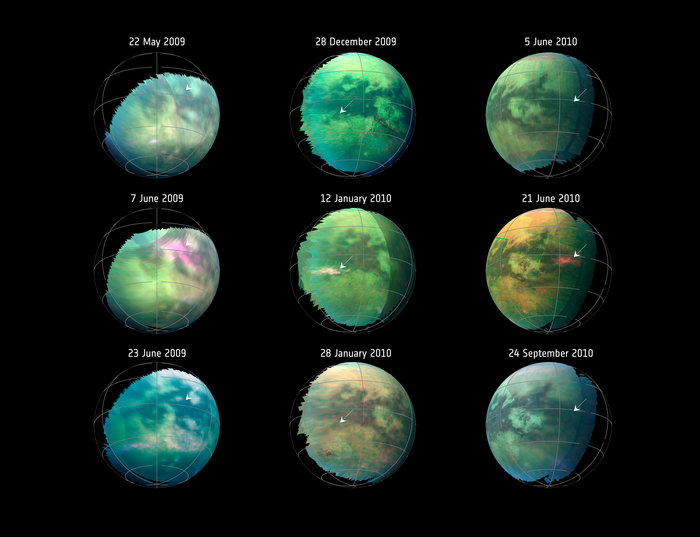 This compilation of images from nine Cassini flybys of Titan in 2009 and 2010 captures instances when clear bright spots suddenly appeared in images taken by the spacecraft’s Visual and Infrared Mapping Spectrometer. Image via NASA/JPL-Caltech/University of Arizona/University Paris Diderot/IPGP/S. Rodriguez et al. 2018.

From what we know about cloud formation on Titan, we can say that such methane clouds in this area and in this time of the year are not physically possible.

The convective methane clouds that can develop in this area and during this period of time would contain huge droplets and must be at a very high altitude, much higher than the 10 kilometers [6 miles] that modeling tells us the new features are located.

The researchers were also able to rule out that the features were on Titan’s surface, in the form of frozen methane rain or icy lavas. Such surface spots would have a different chemical signature and remain visible for much longer, these scientists said, while the bright features in this study were only visible for 11 hours to five weeks.

Computer modeling also showed that the features must be atmospheric, but still close to the surface – most likely forming a very thin layer of tiny solid organic particles. Since they were located right over the dune fields around Titan’s equator, the only remaining explanation was that the spots were actually clouds of dust raised from the dunes.

Sébastien Rodriguez said that – while this is the first-ever observation of a dust storm on Titan – the finding is not surprising:

We believe that the Huygens probe, which landed on the surface of Titan in January 2005, raised a small amount of organic dust upon arrival due to its powerful aerodynamic wake.

But what we spotted here with Cassini is at a much larger scale. The near-surface wind speeds required to raise such an amount of dust as we see in these dust storms would have to be very strong – about five times as strong as the average wind speeds estimated by the Huygens measurements near the surface and with climate models.

For the moment, the only satisfactory explanation for these strong surface winds is that they might be related to the powerful gusts that may arise in front of the huge methane storms we observe in that area and season.

This phenomenon, called “haboob,” can also be observed on Earth with giant dust clouds preceding storms in arid areas. See amazing pics and video from last summer’s haboobs in Arizona.

The existence of such strong winds generating massive dust storms also implies that the underlying sand can be set in motion, too, and that the giant dunes covering Titan’s equatorial regions are still active and continually changing.

The winds could be transporting the dust raised from the dunes across large distances, contributing to the global cycle of organic dust on Titan, and causing similar effects to those that can be observed on Earth and Mars.

The touchdown of ESA’s Huygens probe on Titan in January 2005 is relived in this animation. Via ESA/C. Carreau

Bottom line: Space scientists have evidence for dust storms moving across the surface of Titan, Saturn’s largest moon. That makes Titan the third world in our solar system, along with Earth and Mars, known to have dust storms.