Posted by Matt Daniel and Deborah Byrd in Earth | September 26, 2018 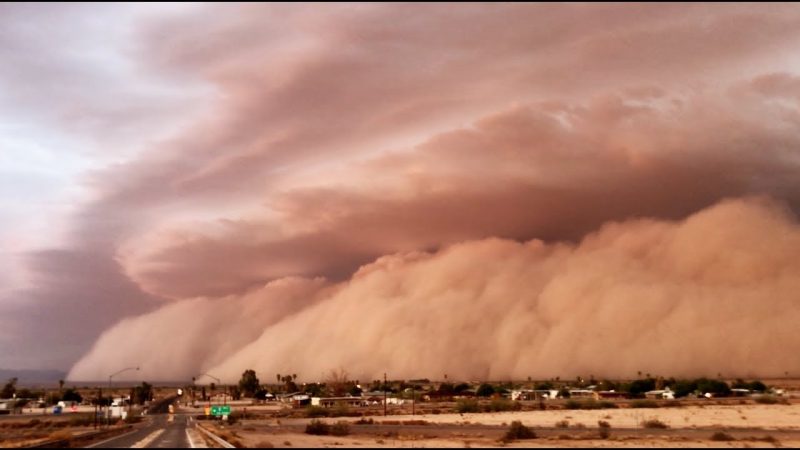 Monster haboob that tracked across southern Arizona on July 10, 2018, via veteran storm-chaser Reed Timmer. See the video below.

Haboobs are intense sand-and-dust storms, carried on winds blowing in summertime in desert regions of the world. Haboobs can create problems for travelers, as well as respiratory problems for those caught in them. Dust seems to consume the air, making visibility low.

What’s it like to encounter a haboob? The image below was caught by Ryan Behnke during a powerful season for dust storms in and around Arizona in 2012. He wrote:

The wind gusts blew my sunglasses off on my motorcycle ride home with about 20 miles to go … I pulled over and eventually went slowly enough to exit and found my way to buy more eye protection from the first gas station I could get to. The storm approached perfectly perpendicular to the freeway … it did not feel/look/taste very good from within that cloud of dust! Glad I didn’t wait it out … would have been breathing that for at least an hour. Then the rain came. It had been quite sunny when I started home minutes earlier.

… after Phoenix was HAMMERED by severe weather. Trees were down everywhere across the Phoenix metro, and these storms then collapsed, sending out an incredible haboob that looked like the end of days along Interstate 8 yesterday evening.

The next video is from StormChasingVideo; it’s the massive haboob that hit the Phoenix, Arizona, metro area on August 2, 2018:

During the summer months in the southwestern United States – in particular, Arizona – the “monsoonal” flow can provide heavy rains for parts of Arizona. If storms develop away from a dry area, then the outflow and winds from that storm can produce these dust storms. They can form from weakening thunderstorms that are pushed by the winds aloft into lower deserts during the evening hours. The rain may fall and virtually evaporate into the hot, dry desert air.

As this process occurs, it cools the air and accelerates it to the surface, creating microbursts or downbursts. These downward winds, which can spread one or two miles across, can produce winds speeds over 70 miles per hour, which is as strong as a weak tornado (EF-0).

These strong, downward-forcing winds strike the desert valley floors, and when this occurs, dust gets picked up into the air and is pushed in the direction the winds are traveling at the surface. These storms can spread outwards at great heights and travel dozens of miles away from the collapsing thunderstorm. Visibilities can drop near zero.

The video below – from ABC15 Arizona in 2018 – explains more about these dust storms and gives you some tips on what to do if you should find yourself caught in one.