The Cassini spacecraft has become part of Saturn, the planet it studied so spectacularly and so long. Cassini’s last images and final moments, here. 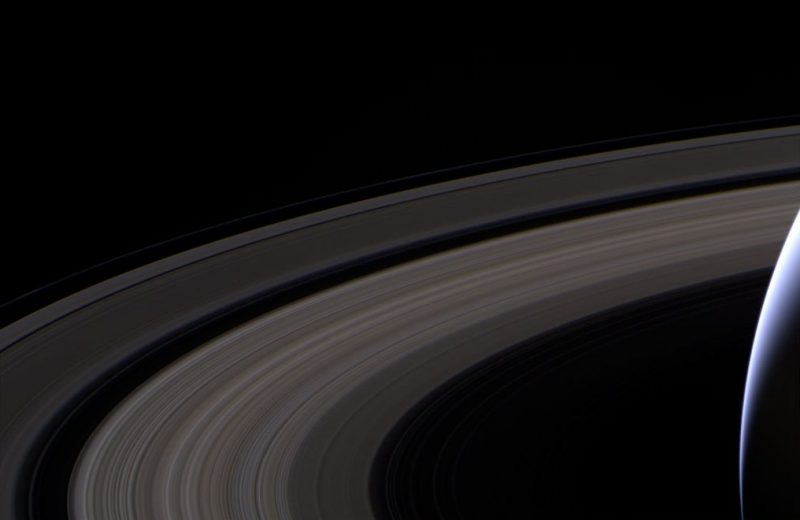 One of Cassini’s final images at Saturn. Go here for the final raw images.

Confirmation of the end of the 20-year Cassini mission at Saturn arrived at NASA’s Jet Propulsion Laboratory at 7:55 a.m. EDT today (11:55 UTC on September 15, 2017) with the loss of the spacecraft’s signal having occurred 83 minutes earlier at Saturn, nearly a billion miles (some 1.4 billion km) from Earth. The mission concluded with an intentional plunge into the planet, with the goal of ensuring that Saturn’s icy moons – in particular ocean-bearing Enceladus – does not risk being contaminated by microbes that might have remained on board the spacecraft from Earth. Atmospheric entry into Saturb began about a minute before loss of signal, and the spacecraft sent scientific data in near real-time until its antenna could no longer point towards Earth. Its last images were sent yesterday, before the final plunge, and during its final moments it made the deepest ever measurements of the plasma density, magnetic field, temperatures and atmospheric composition in Saturn’s atmosphere.

Earth received @CassiniSaturn’s final signal at 7:55am ET. Cassini is now part of the planet it studied. Thanks for the science #GrandFinale pic.twitter.com/YfSTeeqbz1

The spacecraft’s fateful dive was the final beat in the mission’s Grand Finale, 22 weekly dives, which began in late April, through the gap between Saturn and its rings. No spacecraft had ever ventured so close to the planet before.

For the past couple of days, as Saturn has loomed ever larger, Cassini took a last look around the Saturn system, snapping a few final images of the planet, features in its rings, and the moons Enceladus and Titan. The final set of views from Cassini’s imaging cameras was transmitted to Earth beginning on Thursday, September 14. Images are being posted to the Cassini mission website now. The unprocessed images are available at:

A new NASA e-book, The Saturn System Through the Eyes of Cassini, showcasing compelling images and key science discoveries from the mission, is available here, for free download, in multiple formats.

The spot: an infrared image of the location where the spacecraft entered Saturn's atmosphere https://t.co/0tzUxxS2BW #Cassini pic.twitter.com/AXedtqKpBR

During its dive into the atmosphere, the spacecraft’s speed was approximately 70,000 miles (113,000 km) per hour. The final plunge took place on the day side of Saturn, near local noon, with the spacecraft entering the atmosphere around 10 degrees north latitude.

When Cassini first began to encounter Saturn’s atmosphere, the spacecraft’s attitude control thrusters began firing in short bursts to work against the thin gas and keep Cassini’s saucer-shaped high-gain antenna pointed at Earth to relay the mission’s precious final data. As the atmosphere thickened, the thrusters were forced to ramp up their activity, going from 10 percent of their capacity to 100 percent in the span of about a minute. Once they are firing at full capacity, the thrusters could do no more to keep Cassini stably pointed, and the spacecraft began its final tumble.

When the antenna pointed just a few fractions of a degree away from Earth, communications were severed permanently.

Look back in wonder: some of our final views of Saturn https://t.co/h01rZn8mvY pic.twitter.com/FXym30DUOy

Due to the travel time for radio signals from Saturn, which changes as both Earth and the ringed planet travel around the sun, events currently take place there 86 minutes before they are observed on Earth. This means that, although the spacecraft began to tumble and go out of communication at 6:31 a.m. EDT (3:31 a.m. PDT) at Saturn, the signal from that event was not received at Earth until 86 minutes later.

Every time we see Saturn in the night sky, we'll remember. We'll smile. And we'll want to go back. #GrandFinale #GoodbyeCassini #Cassini pic.twitter.com/6tzJ4N9Jif

Bottom line: Click here for links to the last few raw images gathered by Cassini prior to its plunge into Saturn on September 15, 2017, and to learn how to follow the mission’s end online.