For the first time, researchers have found evidence in data sent back by Cassini for methane/ethane rainfall near Titan’s north pole, signaling the start of the summer season on Saturn’s largest moon. 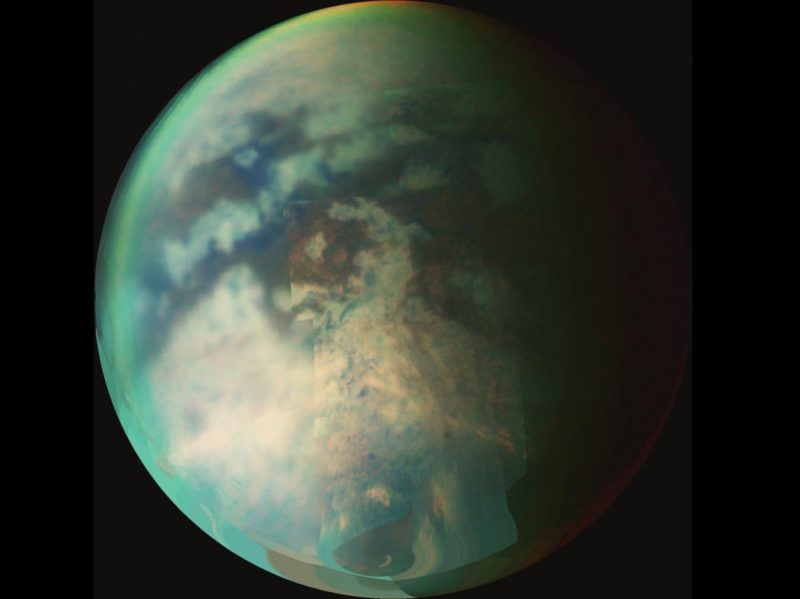 View of Titan from Cassini. New research provides evidence of rainfall on the north pole of Titan. The rainfall indicates that the summer season has started in the moon’s northern hemisphere. Image via NASA/JPL/University of Arizona.

Saturn’s largest moon Titan has often been compared to Earth. Its seas, lakes and rivers are very reminiscent of ones on our own planet, albeit composed of liquid methane/ethane instead of water. The visual similarity, however, is striking. And there’s also another weather-related similarity between Earth and Titan – rain.

The Cassini mission, now ended, had found previous evidence for methane rain on Titan, and now a new study, led by Rajani Dhingra, a doctoral student in physics at the University of Idaho, provides more insight into rainfall at Titan’s north pole and how that relates to the start of this distant moon’s summer season.  The peer-reviewed study has been accepted for publication in Geophysical Research Letters. From the paper’s summary:

Cassini arrived in the Saturnian system in the southern summer of 2004. As expected, the Cassini team observed cloud cover, storms and precipitation on the south pole. Like Earth, Titan has an axial tilt (27 degrees) and its seasons vary over its year (30 Earth years). Ever since this shift in season began, the Cassini team eagerly waited for observations indicating cloud cover and precipitation that went missing from the northern latitudes. Our rainfall observation at the north pole is a major finding for two important reasons. Firstly, this discovery observation heralds the much awaited arrival of the north polar summer rainstorms on Titan. This atmospheric phenomenon has been delayed compared to the theoretical predictions and was perplexing Titan researchers and climate modelers especially because the north pole hosts most of Titan’s lakes and seas. Secondly, it is extremely difficult to detect rainfall events on Titan due to its thick atmospheric haze and very limited opportunities to view the surface (and its changes). We have used a novel phenomenon – the smoothening of a previously dry, rough surface by a thin layer of fluid after rainfall, similar to a wet side walk – as evidence for rainfall events on the surface of Titan. 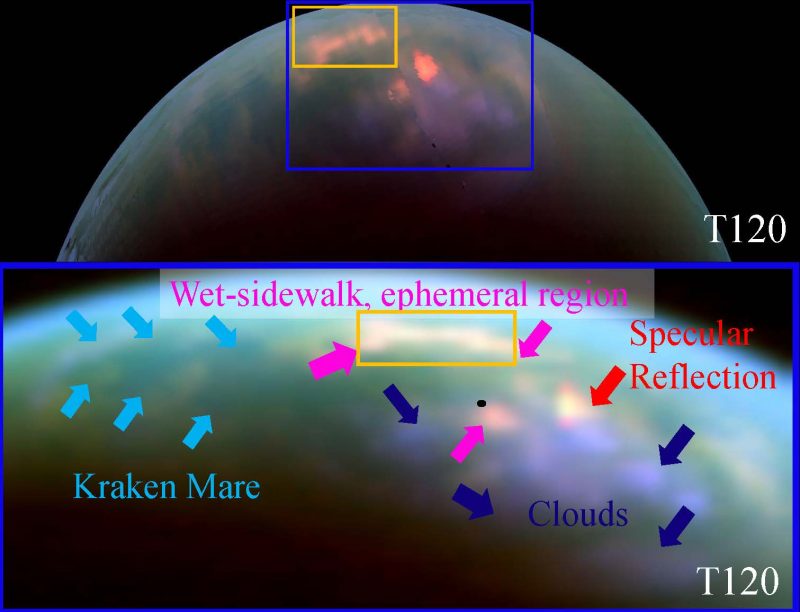 Titan’s north pole as seen by Cassini’s Visual and Infrared Mapping Spectrometer. The orange box highlights the “wet sidewalk” region where methane/ethane rain has left the rough surface wet and reflective. Image via NASA/JPL/University of Arizona/University of Idaho.

The rainfall and associated clouds had been anticipated for some time by scientists, but weren’t seen, according to Dhingra:

The whole Titan community has been looking forward to seeing clouds and rains on Titan’s north pole, indicating the start of the northern summer, but despite what the climate models had predicted, we weren’t even seeing any clouds. People called it the curious case of missing clouds.

So where was the rain? Even the Huygens probe – part of the Cassini mission – which landed on Titan in 2005, found “damp sand” reminiscent of crème brûlée in what was thought to be a mostly dry riverbed that periodically flows with liquid methane. As on Earth, those rivers are fed by rainfall.

The research team took a closer look and found something intriguing – a reflective feature near Titan’s north pole on an image taken on June 7, 2016, by Cassini’s near-infrared instrument, the Visual and Infrared Mapping Spectrometer. Covering approximately 46,332 square miles (119,999 square km), the feature was not seen in previous or subsequent images. 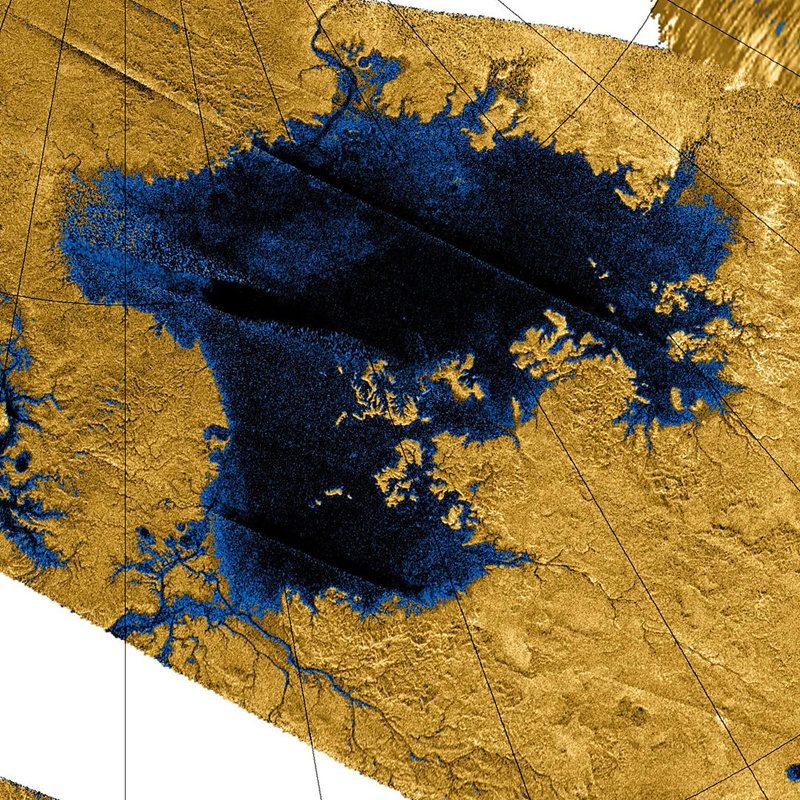 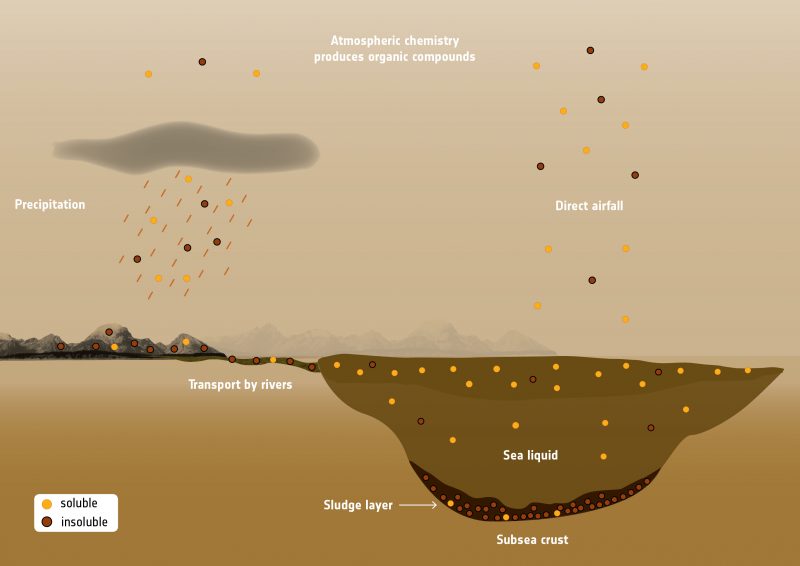 Illustration of how rainfall on Titan brings organic compounds to the surface and feeds the rivers, lakes and seas. Image via ESA.

Analysis indicated it was similar to a sunlit wet sidewalk, the scientists said, that is, that it, it was wet ground following a methane rainfall event, followed in turn by a period of evaporation. Scientists could even discern what kind of surface was wet; they said it was pebble-like. As Dhingra had explained, a rougher surface generates an amorphous pattern as the liquid settles in crevasses and gullies, while liquid on a smooth surface would puddle in a relatively circular pattern.

We want our model predictions to match our observations. This rainfall detection proves Cassini’s climate follows the theoretical climate models we know of. Summer is happening. It was delayed, but it’s happening. We will have to figure out what caused the delay, though.

The surface of Titan as seen by the Huygens lander in 2005. Huygens found damp sand when it landed near a shoreline or riverbed. The liquid was methane/ethane, but the “rocks” turned out to be composed of solid water ice. Image via ESA/NASA/University of Arizona.

Titan is the only other body in the solar system known to have liquid seas, lakes and rivers on its surface. Even though it is extremely cold and the liquid is methane/ethane, not water, some scientists think it is possible that some form of primitive life could exist there. There is also a liquid water ocean deep below the surface that could be potentially habitable by life.

Bottom line: Titan is a bizarre world – eerily similar to Earth in some ways, yet utterly alien at the same time. The new study of Titan’s rainfall patterns provides more insight into how this moon mimics Earth but remains a strangely very different place at the same time.