Which spiral arm of the Milky Way contains our sun?

We live in a seemingly nondescript neighborhood in the Milky Way galaxy, in a small spiral arm called the Orion Arm. 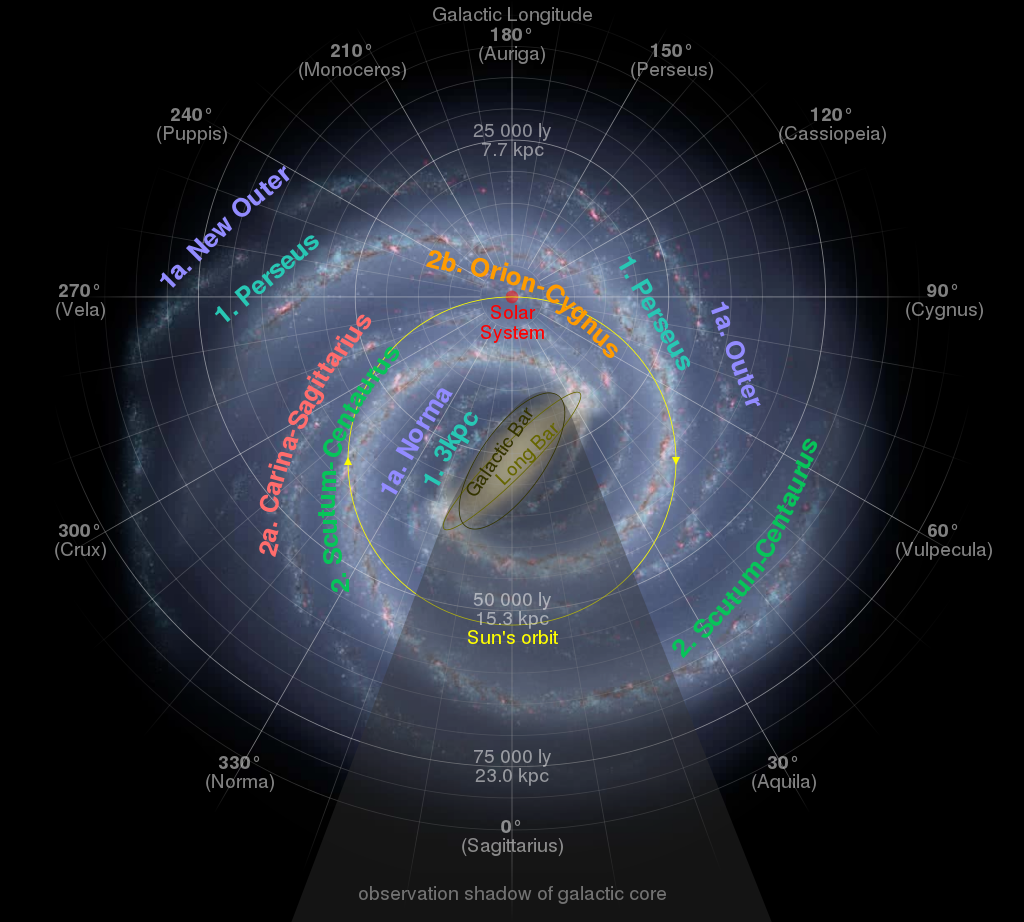 Our Milky Way galaxy is the island of stars we call home. If you imagined it as a disk with spiral arms emanating from the center, our sun is about a third of the way from the center to the visible edge. Our solar system is located between two prominent spiral arms, in what astronomers once thought was a mere bridge of stars, gas, and dust clouds. In recent decades, research advances have revealed that we live in our very own spiral arm of the galaxy, albeit a relatively minor one. Our spiral arm is formally called the Orion-Cygnus Arm. It’s also known simply as the Orion Arm or Local Arm, and you sometimes still hear the names Orion Bridge or Orion Spur.

Th Milky Way is a spiral galaxy. In fact, the Milky Way is a barred spiral galaxy, which means it has a central bar. There’s still a lot we don’t know about the structure of our galaxy. According to the best current knowledge, the Milky Way is about 150,000 to 200,000 light-years across, and about 2,000 light-years deep, and has 100 to 400 billion stars. There may be four primary spiral arms emanating from its center bar with an unknown number of smaller offshoot arms.

Where, within this vast spiral structure, do our sun and its planets reside? We’re about 26,000 light-years from the center of the galaxy, on the inner edge of the Orion-Cygnus Arm.

It’s sandwiched by two primary spiral arms, the Sagittarius and Perseus Arms. The artists’ concepts above and below show the Orion-Cygnus Arm, the home spiral arm of our sun in the Milky Way galaxy. 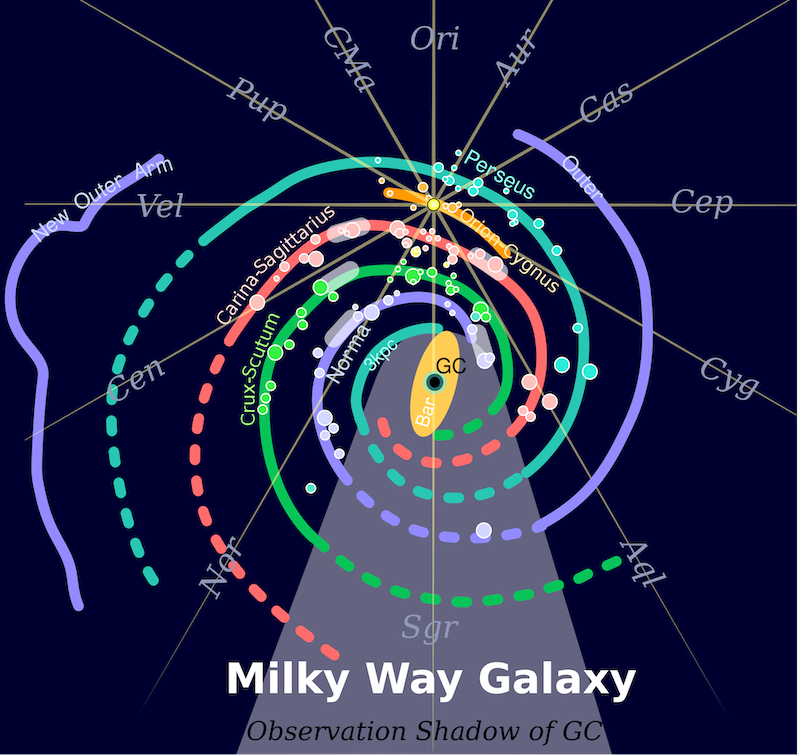 In this diagram, you can more clearly see the 4 major spiral arms of the Milky Way. The Perseus Arm is shown in cyan, and the Carina-Sagittarius Arm in pink. Towards the top, the sun’s location is marked on the orange-colored Orion-Cygnus Arm. The center of the galaxy is marked GB, for “galactic bar.” Image via Rursus/ Wikimedia Commons.

Astronomers are continuing to piece together the structure of the Milky Way by painstakingly measuring the positions and distances to many stars and gas clouds. Distances are determined from parallax measurements by telescopes on the ground and in space. One currently-operational space telescope, Gaia, is expected to provide a wealth of new information to better characterize the Milky Way’s structure and size. In fact, it’s Gaia’s stated goal to provide a 3-dimensional map of our Milky Way. 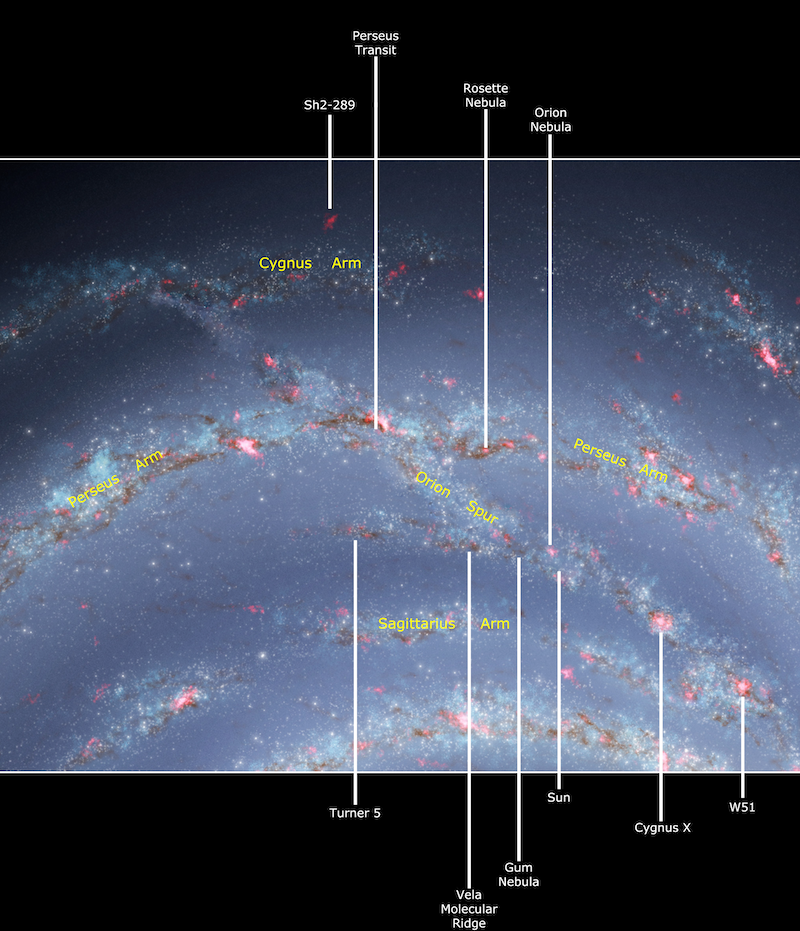 Artist’s concept of our galactic neighborhood. Some of the best-known astronomical objects in our sky lie in the Orion Arm, including our sun. Image via R. Hurt/ Wikimedia Commons. 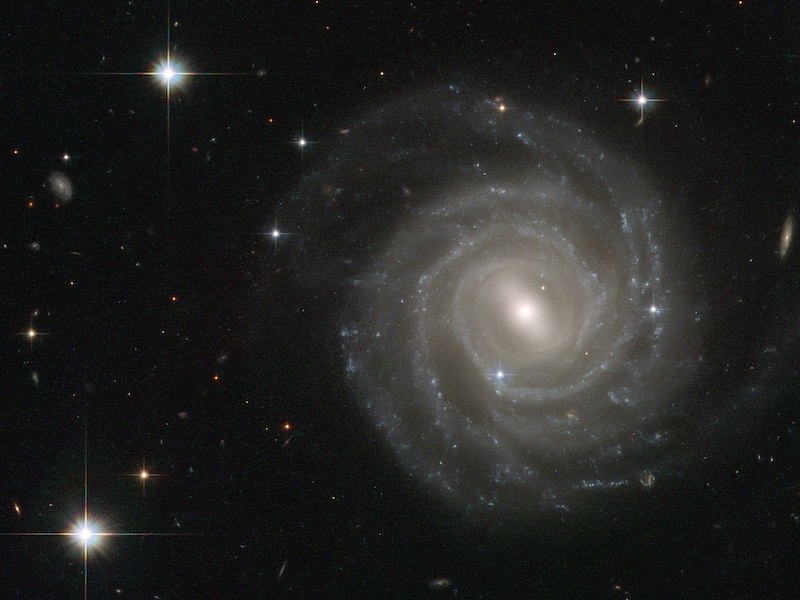 UGC 12158, shown here in this image by the Hubble Space Telescope, is a barred spiral galaxy that is thought to bear a close resemblance to the Milky Way galaxy. Image via NASA/ ESA/ Wikimedia Commons.

Bottom line: The sun is about 1/3 the distance from the center of the Milky Way galaxy to its outer edges. It’s located in a smaller spiral arm, between two large arms, called the Orion Arm.