Our Milky Way is a barred spiral galaxy. Now astronomers say they have identified some individual stars making up the bar.

One of the most interesting revelations in modern astronomy has been that we don’t just live in a spiral galaxy. In fact, we live in a barred spiral galaxy. Observations via radio telescopes had suggested the barred nature of our Milky Way, and in 2005, the Spitzer Space Telescope backed up those suggestions while studying the galaxy in the infrared region of the spectrum. Today (December 19, 2012), astronomers from the Sloan Digital Sky Survey III (SDSS-III), working with an international team, announced they’ve found hundreds of stars rapidly moving together in long, looping orbits around the center of the Milky Way. They think these stars are part of the Milky Way bar. 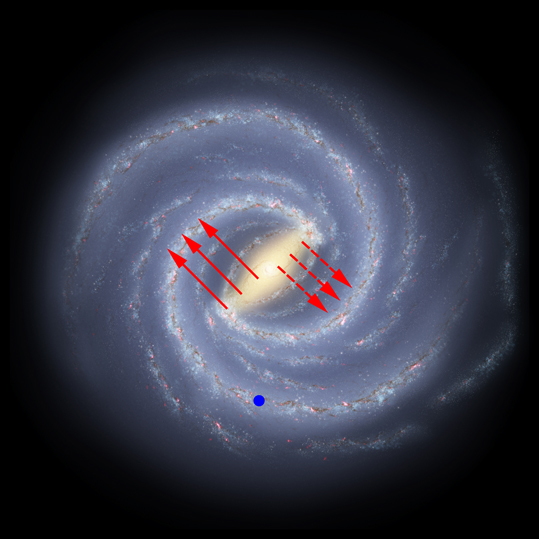 Although various lines of evidence suggested the existence of a Milky Way bar, scientists had no way of knowing which Milky Way stars are part of the bar. To find out, the team needed to know the velocities of stars near the center of the Milky Way. That data would tell them which stars are moving as a group. And they had to observe in the infrared part of the spectrum because the center of our galaxy – which is 25,000-30,000 light-years away – is hidden from our view by dust.

To get the data they needed, they participated in a project called APOGEE (Apache Point Observatory Galactic Evolution Experiment). The project uses a custom-built high-resolution infrared spectrograph attached to the 2.5-meter Sloan Foundation Telescope in New Mexico. APOGEE is a larger survey aimed at characterizing 100,000 stars in our Milky Way Galaxy. These astronomers used data from the first few months of APOGEE observations to find out the velocities for nearly 5,000 stars near the Milky Way’s center.

With those measurements in hand, the astronomers could then see whether some of the stars are moving together in some unusual pattern. 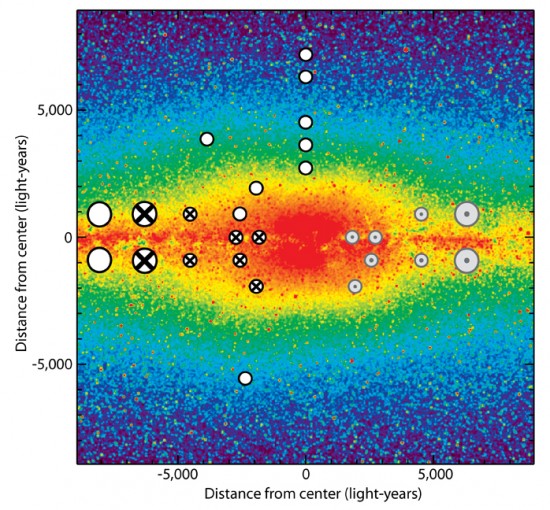 A map of the innermost Milky Way, with circles marking the regions explored by the SDSS-III APOGEE project. Circles marked with “X” show places where the project found high-speed stars associated with the Milky Way’s bar moving away from Earth. The lighter regions marked with dots on the other side of the galaxy’s center show places where the fourth-generation Sloan Digital Sky Survey hopes to find counterpart bar stars moving toward the Earth. Illustration Credit: David Nidever (University of Michigan / University of Virginia) and the SDSS-III Collaboration.

And indeed the stars were moving in an unusual pattern. The astronomers found that a substantial fraction of stars in the inner galaxy are moving away from us quickly. In an online post, they said:

… about 10 percent of the total stars in the sample are moving at more than 200 kilometers per second (400,000 miles per hour) away from the Earth. The observed pattern of these fast stars is similar in many different parts of the inner galaxy, and is the same above and below the midplane of the galaxy — suggesting that these measurements of fast central stars are not just a statistical fluke, but really are a feature of our galaxy.

Comparing these observations with computer models of the Milky Way’s central bar, they became convinced the stars they were measuring – those seen to be fleeing from Earth – were indeed part of the bar. In fact, this is just the part of the bar rotating away from our direction in space.

That’s very cool! But these astronomers say their work is only half done.

So far, APOGEE has only observed one side of the bar, the side where the stars are moving away from the Earth. On the other side, the stars must be moving toward Earth. But unfortunately, the Sloan telescope is inconveniently placed: the other half of the Milky Way bar is visible only from Earth’s southern hemisphere. Seeing the other side of the bar is one of the motivations for a planned fourth generation of the Sloan Digital Sky Survey. Part of this successor project will implement the same techniques using a 2.5-meter telescope in Chile to observe the rest of the inner Milky Way. The new survey is set to begin in 2014.

By the way, our Earth and sun lie near a small, partial arm called the Orion Arm, or Orion Spur, located between the Sagittarius and Perseus arms of the Milky Way. Read more about how we know our location in the Milky Way here.

Bottom line: On December 19, 2012, an international team of astronomers – including astronomers from the Sloan Digital Sky Survey III (SDSS-III) announced that they have identified stars in the bar of our barred spiral galaxy, the Milky Way.