Crescent moon in Gemini on May 9 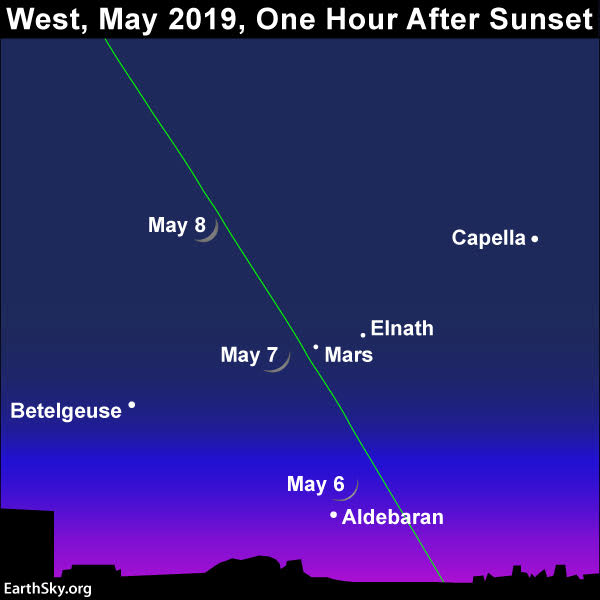 Want to understand something about how eclipses happen? Earth’s orbit around the sun creates a flat plane that astronomers call the ecliptic. The moon’s orbit around Earth is a second flat plane, inclined to the Earth-sun plane by about five degrees. The moon in its orbit intersects the plane of Earth’s orbit at two points called nodes. The moon crosses these nodes every month – ascending from south to north, and then some two weeks later, descending from north to south. Astronomers call these crossing points ascending and descending nodes.

Eclipses of the sun or moon can happen only when the new moon or full moon is near a node. That’s the only time that we on Earth see the new moon pass directly in front of the sun (solar eclipse), or see the Earth’s shadow fall on the full moon (lunar eclipse).

On May 9, 2019, the waxing crescent moon crosses the ecliptic (plane of Earth’s orbit around the sun) in front of the constellation Gemini the Twins. Because the moon is crossing the ecliptic from south to north, the moon is said to be at its ascending node.

Eclipse this month? No, because the moon has to be either at the new phase (closest to being between the Earth and sun for that month) or full phase in order for an eclipse to take place. But we’re headed toward a total solar eclipse in early July 2019, visible from South America. Keep reading … 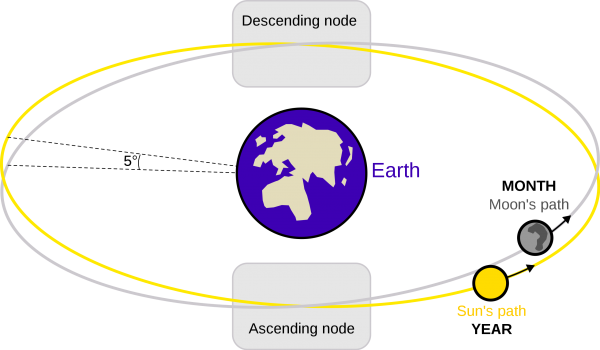 From an Earth-centered perspective, the lunar nodes are the two points where the moon’s orbital path crosses the ecliptic, or sun’s apparent yearly path on the imaginary celestial sphere surrounding Earth. In reality, the nodes are the points where the plane of the moon’s orbit around Earth intersects the plane of Earth’s orbit around the sun. Image via Wikimedia Commons.

Every month this year, in 2019, the moon crosses the ecliptic at its ascending node in front of the stars of Gemini.

In 2019, the sun passes in front of Gemini from June 22 to July 21. Of course, it’s really the Earth that’s doing the moving. The Earth’s yearly orbit around the sun makes it appear as if the sun travels full circle in front of the constellations of the zodiac every year. Constellation chart via IAU.

Next month, when the moon crosses its ascending node on June 5, 2019, the moon will exhibit a thinner waxing crescent phase in front of Gemini.

In July 2019, the new moon will take place in front of the constellation Gemini. Moreover, it’ll take place less than 1/2 day (12 hours) before the moon reaches its ascending node. The close coincidence of new moon and ascending node means a total eclipse of the sun along a narrow corridor of the Earth’s surface on July 2, 2019.

Then, at long last, the new moon and a solar eclipse will happen in front of the constellation Gemini the Twins in early July 2019. 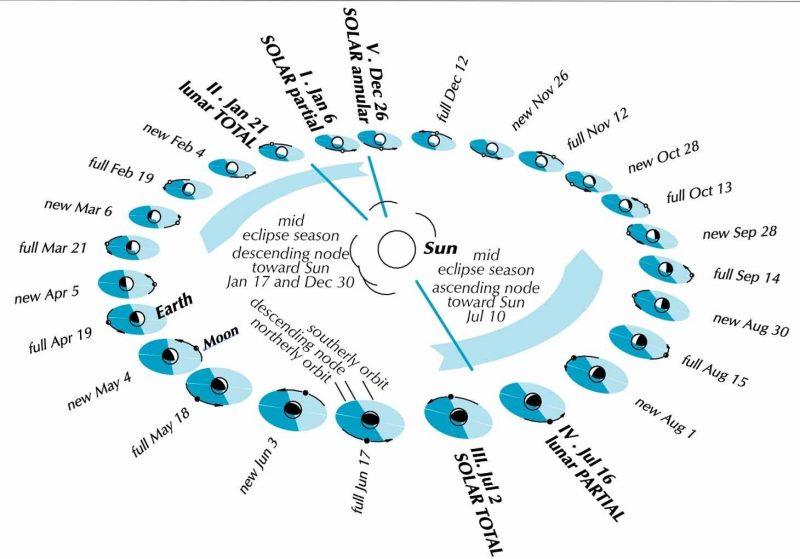