When did turtles get their shells?

The evolutionary origin of a turtle’s hard protective shell has long puzzled scientists. New fossil evidence published in the journal Current Biology on May 30, 2013 suggests that turtle shells may have started to evolve in reptiles 260 million years ago, which is 40 million years earlier than previously thought.

Much like our bones, the primary mineral in a turtle shell is calcium phosphate. Turtle embryos develop shells through the fusion of rib bones and back bones. The upper portion of the shell is called the carapace and the lower portion is called the plastron. The carapace and plastron are joined together with bony material called the bridge. In most turtles, a protective layer of scutes (rhymes with chutes) composed of keratin cover the shell, though some turtles such as soft shelled turtles and leatherback turtles lack scutes. Because turtle shells form through the fusion of bones, they represent a unique type of structure in biology. 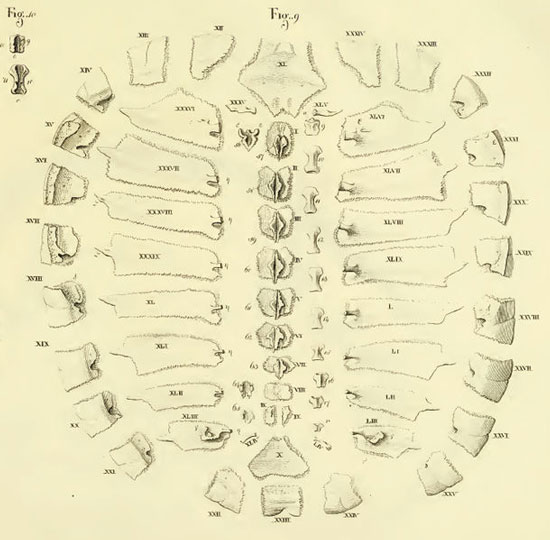 Expanded view of the bones in a turtle shell from Emys orbicularis. Image Credit: Ludwig Heinrich Bojanus, 1776-1827, via Wikimedia Commons.

Up until 2008, the oldest known fossilized turtle shell was from 210 million years ago. This was near the time of the Triassic Period when dinosaurs first appeared on earth. The shell, found in Germany, belonged to the extinct turtle species, Proganochelys quenstedti. Because the fossil was of a fully formed shell, it gave scientists few clues about its evolutionary history.

In 2008, a partially formed fossilized shell from the early turtle species, Odontochelys semitestacea, was discovered in China. The shell was estimated to be approximately 220 million years old. It had a fully developed plastron, but only a partially developed carapace that was made up of broadened ribs. Scientists believe that this fossil represents an early view of how turtle shells evolved. The broadened ribs on the carapace prompted scientists to take a closer look at a similar looking species known from fossils in South Africa. 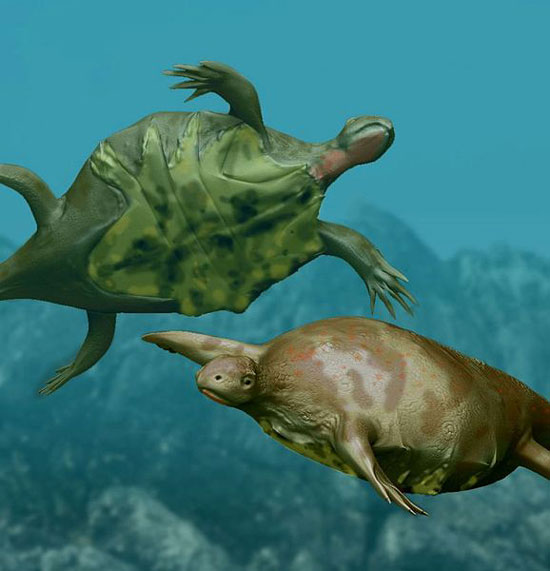 Tyler Lyson, a scientist affiliated with the Yale Peabody Museum of Natural History and the Smithsonian Institution, analyzed 45 specimens of Eunotosaurus africanus, a 260-million-year old fossil reptile from South Africa. He found that this species has several features in common with modern day turtles including paired rib bones and a lack of rib muscles that are used for breathing in many vertebrates. He commented on the findings in a news release:

Now we’ve got an intermediate shell, a transitional form that bridges the gap between turtles and other reptiles and helps explain how the turtle shell evolved. Eunotosaurus is an early offshoot of the lineage that gave rise to modern turtles — it’s an early stem turtle.

One of the largest mass extinctions on earth occurred at the end of the Permian period approximately 252 million years ago. It amazes me to think that, somehow, these incredible prehistoric turtles managed to survive.

Bottom line: New fossil evidence published in the journal Current Biology on May 30, 2013 suggests that turtle shells may have started to evolve in reptiles 260 million years ago, which is 40 million years earlier than previously thought.

Ancient turtle the size of a (small) car