With just a few hours of paddling a day, tiny loggerhead hatchlings navigate powerful currents, using the Earth’s magnetic field to orient themselves.

At just a few centimeters long, hatchling loggerhead turtles may seem powerless to resist being swept around the Atlantic Ocean by powerful currents.

But researchers have shown that the tiny turtles can influence where they end up with just a few hours of paddling a day, using the Earth’s magnetic field to orient themselves.

By modeling the turtles’ behavior in an ocean circulation model, the researchers found that as little as an hour of active swimming every day could nudge the hatchlings into warmer waters at lower latitudes. More time spent swimming had a greater effect, and after swimming for three hours a day some hatchlings were 520km further south.

Rebecca Scott, a PhD student at Swansea University, is lead author of the study, published in Marine Biology. Scott said:

It’s quite impressive. Just a tiny bit of behaviour by such a small animal can have a major impact in such a strong ocean current as the Gulf Stream.

Being further south has clear benefits for the hatchling turtles. It can help them avoid being carried north into colder water, which could kill them, and the warmer water in the south also boosts their metabolism and feeding rate. As long as there is plenty of food, any turtles that reach warmer waters can grow faster than if they were stranded in cooler seas.

The results also show that their magnetic sense is valuable for the young turtles even though, unlike the more powerful adults, they have only limited control over where the ocean currents take them. 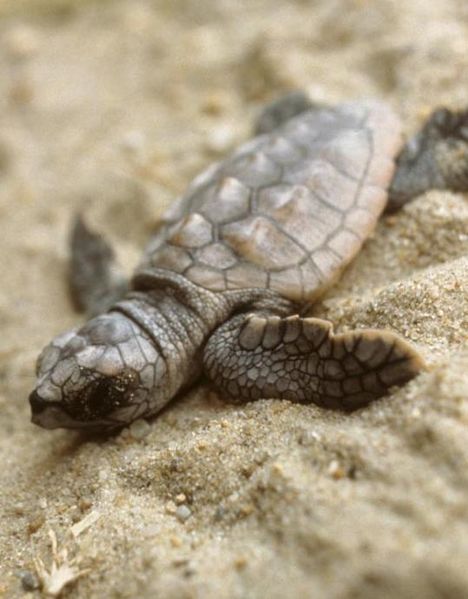 Other scientists have shown that loggerhead turtle hatchlings change their preferred swimming direction based on the orientation of a magnetic field applied by researchers. But, until now, there was little evidence that such tiny animals could actually influence their direction of travel in the wild.

Finding out where the hatchling turtles go once they leave their nesting beaches has proven a challenge for researchers. Scott said:

The hatchlings are just four to five centimetres long, so a tag would sink them.

Instead, the researchers used an ocean-circulation model to predict the effect of swimming on the hatchlings’ eventual destination. They began by modelling the path that passively drifting hatchlings would take as they left breeding beaches in Florida. With this providing a baseline, they ran the model again with a small amount of swimming behaviour added to the virtual turtles. This time, the simulated hatchlings could swim at just 1.13km/h, the average speed of hatchling loggerheads, for either one, two or three hours per day for a year. They spent the rest of their time passively drifting on the ocean currents.

Paradoxically, after 25 days the swimming hatchlings were further north than the non-swimmers. This is because, by swimming, the hatchlings had managed to reach the powerful currents of the Gulf Stream faster than passively drifting hatchlings and were carried northwards.

But from 25 days onwards, the virtual turtles that could swim began to make progress south and, after just 90 days, they were significantly further south than the non-swimmers. At the end of the year the virtual hatchlings that swam for an hour a day were 179km further south, while those that swam for two or three hours had travelled southwards by 347km and 520km respectively. The water in these regions was also much warmer, with a temperature difference of between 1.5 and 2.7oC.

The loggerhead turtles that hatch on beaches in Florida immediately take to the oceans. Here they remain for seven or eight years before returning to Florida as adults. They depend on ocean currents to cross the Atlantic and reach the Azores, whose warm, food-rich waters provide an ideal environment for the young turtles. The location of the Azores also provides easy access to the North Atlantic Gyre, a powerful ocean current which the turtles use for their return journey to Florida.

After reaching the Gulf Stream, which sweeps northwards, the turtles enter the North Atlantic Gyre. This carries them east and then south to warmer seas, although no-one knows for certain where the turtles go for much of this phase of their lives. Scott said:

The North Atlantic Gyre is basically a big clock-wise moving current. It reaches all the way to the Azores and back to the east coast of America. The hatchlings circulate in this current and reside in temporary development habitats along the way for about eight years before they return to the coast of the USA to complete their development to adulthood.

The findings could help conservationists identify key areas for focused efforts to protect some species, and predict the spread of invasive species more accurately.