Many species including fish, snakes, turtles, insects and birds benefit when American alligators create wetland depressions that hold water during dry periods. An article describing how alligator holes help ecosystems in the Florida Everglades was published on June 4, 2012 in Ecotone by the Ecological Society of America.

The return of the American alligator from the brink of extinction is often heralded as a conservation success story by scientists.

Adam Rosenblatt is a Ph.D. candidate at Florida International University who is studying the American alligator and their role in Florida Everglades ecosystems. He is one of this year’s three winners of the Ecological Society of America’s Graduate Student Policy Award. He described to the Ecological Society of America how American alligators can have a large impact on ecosystems in the Everglades because of their role as large predators.

American alligators can also have a large impact on ecosystems in the Everglades through their ability to function as ecosystem engineers. 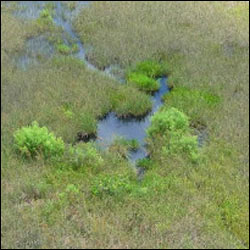 Adult alligators excavate depressions in wetlands by use of their feet, snouts and tails. The depressions they create retain water in the wetland even during dry periods. Alligators are thought to create alligator holes in order to stay cool during hot weather, to attract prey and to successfully mate and reproduce. The extra water present in alligator holes is beneficial to many other wildlife species including fish, snakes, turtles, insects and birds.

Rosenblatt is conducting his research on the American alligator through the Florida Everglades Long-Term Ecological Research (LTER) Program, which is funded by the National Science Foundation. He said during an interview with the Ecological Society of America that his research group is working to put together an integrated picture of studies on the Everglades so that they can promote healthy Everglades ecosystems through restoration activities.

Bottom line: An article published on June 4, 2012 in Ecotone describes how American alligators help ecosystems in the Florida Everglades by creating alligator holes that hold water during dry periods. The extra water is beneficial to many wildlife species including fish, snakes, turtles, insects and birds.