A new kind of pterosaur, a flying reptile from the time of the dinosaurs, has been identified by scientists.

A new kind of pterosaur, a flying reptile from the time of the dinosaurs, has been identified by scientists from the University of Southampton, the Transylvanian Museum Society in Romania and the Museau Nacional in Rio de Janiero, Brazil. 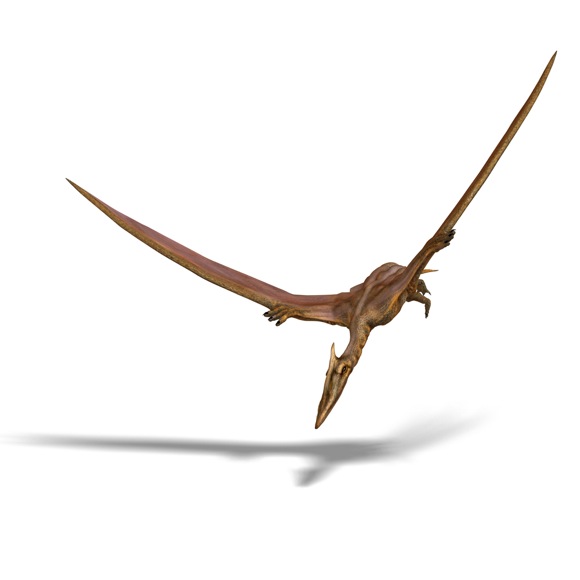 The fossilised bones come from the Late Cretaceous rocks of Sebe?-Glod in the Transylvanian Basin, Romania, which are approximately 68 million years old. The Transylvanian Basin is world-famous for its many Late Cretaceous fossils, including dinosaurs of many kinds, as well as fossilised mammals, turtles, lizards and ancient relatives of crocodiles.

A paper on the new species, named Eurazhdarcho langendorfensis has been published in the international science journal PLoS One. Dr Darren Naish, from the University of Southampton’s Vertebrate Palaeontology Research Group, who helped identify the new species, says: “Eurazhdarcho belong to a group of pterosaurs called the azhdarchids. These were long-necked, long-beaked pterosaurs whose wings were strongly adapted for a soaring lifestyle. Several features of their wing and hind limb bones show that they could fold their wings up and walk on all fours when needed.

“With a three-metre wingspan, Eurazhdarcho would have been large, but not gigantic. This is true of many of the animals so far discovered in Romania; they were often unusually small compared to their relatives elsewhere.”

A silhouette of the known bones of Eurazhdarcho in position. Image by Mark Witton

The discovery is the most complete example of an azhdarchid found in Europe so far and its discovery supports a long-argued theory about the behaviour of these types of creatures.

Dr Gareth Dyke, Senior Lecturer in Vertebrate Palaeontology, based at the National Oceanography Centre Southampton says: “Experts have argued for years over the lifestyle and behaviour of azhdarchids. It has been suggested that they grabbed prey from the water while in flight, that they patrolled wetlands and hunted in a heron or stork-like fashion, or that they were like gigantic sandpipers, hunting by pushing their long bills into mud.

“One of the newest ideas is that azhdarchids walked through forests, plains and other places in search of small animal prey. Eurazhdarcho supports this view of azhdarchids, since these fossils come from an inland, continental environment where there were forests and plains as well as large, meandering rivers and swampy regions.”

Fossils from the region show that there were several places where both giant azhdarchids and small azhdarchids lived side by side. Eurazhdarcho’s discovery indicates that there were many different animals hunting different prey in the region at the same time, demonstrating a much more complicated picture of the Late Cretaceous world than first thought.