On September 4, 2012 a NASA satellite captured an image of lava flowing down Anak Krakatau. The fresh lava has extended the shoreline of the volcanic island. 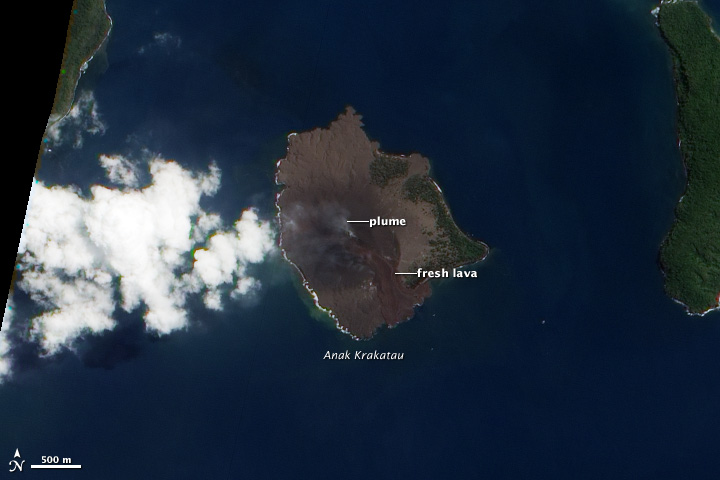 Krakatau is one of the world’s most infamous volcanoes. The volcano is located just east of Jakarta, Indonesia in the Sundra Strait between the islands of Java and Sumatra. In 1883, a cataclysmic explosion destroyed Krakatau’s caldera and killed 36,417 people. 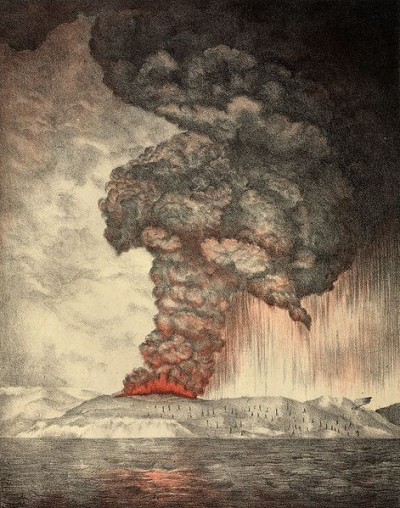 It’s said that the sound created by the 1883 explosion was the loudest sound heard in modern history. People reported hearing the explosion from nearly 3,000 miles (4,800 kilometers) away. In the year after the 1883 explosion, global air temperatures dropped by as much as 2.2 degrees fahrenheit (1.2 degrees celsius) due to aerosols emitted into the atmosphere.

Though Krakatau essentially disappeared from the ocean’s surface in 1883, subsequent undersea eruptions eventually rebuilt the island. By 1927, the volcano had once again arisen from beneath the sea. Today, the new volcanic island that has formed is known as Anak Krakatau, which is Indonesian for ‘child of Krakatau’.

The Smithsonian Institution’s Global Volcanism Program reports that a strombolian eruption – which is a relatively low-level type of eruption – ejected lava 200 to 300 meters (656 to 984 feet) above Anak Krakatau’s crater on September 3, 2012. Strombolian eruptions are characterized by fountains of basaltic lava caused by the release of pressurized volcanic gases. This type of eruption was named after the Stromboli volcano, located north of Sicily, Italy. 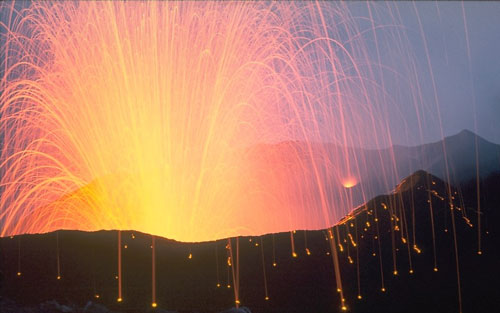 A strombolian eruption. Image Credit: B. Chouet via USGS.

Anak Krakatau currently has a radius of about 2 kilometers (6562 feet) and a height of 324 meters (1063 feet) above sea level, according to Wikipedia. Those data may need to be updated as a variety of September 2012 news reports list the current height of Anak Krakatau at 405 meters (1330 feet).

Anak Krakatau is growing in height at an average rate of about 5 meters (16 feet) per year. Before the historic 1883 eruption, Anak Krakatau stood at approximately 813 meters (2667 feet) above sea level, according to the Global Volcanism Program.

In other words, the child is growing up! 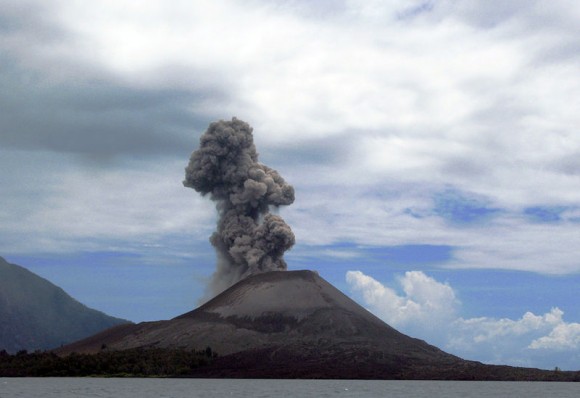 Bottom line: On September 4, 2012 NASA’s Earth Observing-1 satellite captured an image of lava flowing down the southeastern flank of the Anak Krakatau. The fresh lava is estimated to have extended the shoreline of the volcanic island by about 100 meters (330 feet), according to a report issued by NASA’s Earth Observatory.

Best image yet of ongoing activity at Popocatépetl volcano