Best image yet of ongoing activity at Popocatépetl volcano

Mexico’s Popocatepetl volcano has been active since mid-April 2012, and now NASA has produced the best image yet of this spectacular volcano.

Mexico’s Popocatepetl volcano (pronounced poh-poh-kah-TEH-peh-til) has been active since mid-April 2012, and now NASA has produced the best image yet of this spectacular volcano. This false-color image of the volcano was acquired yesterday (April 23, 2012) by NASA’s Terra satellite. 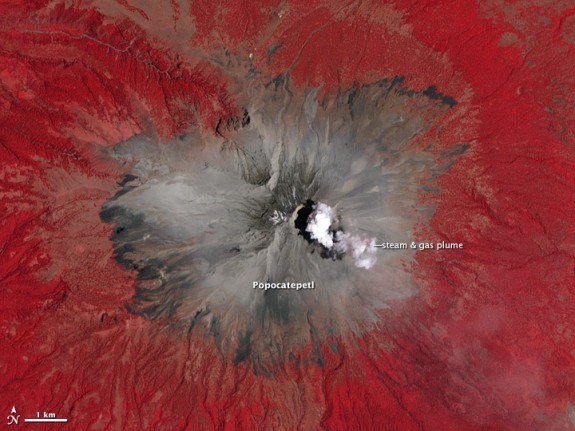 Popocatépetl (pronounced poh-poh-kah-TEH-peh-til) is one of Mexico’s most active volcanoes. NASA says it has been erupting since January 2005, with near constant venting from fumaroles punctuated by minor steam, gas, and ash emissions. Activity began to pick up significantly in mid-April.

The last major eruption of Popocatépetl occurred in 800 A.D., in which vast amounts of lava and ash from the volcano completely filled many of the surrounding valleys. Since then, there have been at least five moderate eruptions, two of which occurred in the 1900s.