The Popocatepetl volcano, located about 43 miles (70 km) southeast of Mexico City, has been spouting ash and vapor into the sky this week.

Mexico’s Popocatepetl volcano is located between the Mexican states of Puebla and Morelos, about 43 miles (70 kilometers) southeast of Mexico City. According to NASA, many volcanologists consider it to be “the planet’s riskiest volcano”. On the evening of April 16, 2012, the Mexico’s Center for Disaster Prevention announced that Popocatépetl was set to erupt. AP reported yesterday (April 18, 2012) that Mexican authorities had moved alert levels to five on a seven-level scale for the areas surrounding Popocatepetl, near Mexico City. On April 19, there were reports of superheated rock fragments being hurled into the air by the 17,900-foot volcano. 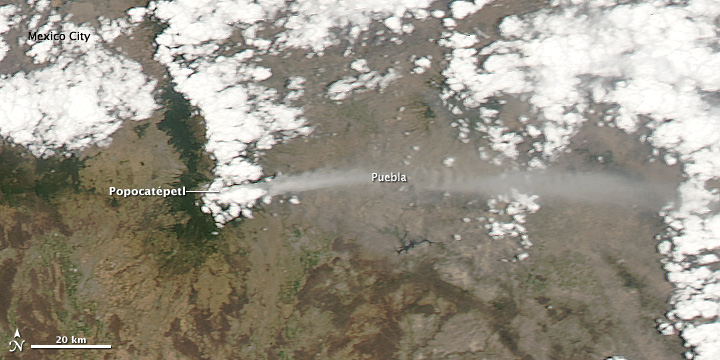 According to Reuters schools in at least five towns cancelled classes. No evacuations are underway, but emergency teams are said to be getting ready to evacuate residents if needed. Carlos Gutierrez, head of operations at the National Disaster Prevention Centre, told Reuters that the current alert could remains for several weeks or months until the activity decreases.

Ash fell over the last five days in about 30 different villages near the volcano, according to according to geologist Erik Klemetti and the Eruptions Blog.

The last Popocatepetl eruption happened on December 18, 2000 when more than 50,000 residents were evacuated from the area around Mexico City.