Earthquakes in Yellowstone: ‘Elevated but not unusual’

Heard about the recent earthquakes in Yellowstone? How about that video of bison fleeing the park? Does it mean the supervolcano is about to blow? No, and here’s why.

In recent weeks, there’s been a flurry of news about the volcanic system that lies beneath Yellowstone National Park, one of the best-loved parks in the United States. March 2014 saw swarms of earthquakes there, with 332 earthquakes striking Yellowstone last month. The largest event was a 4.8-magnitude quake on March 30. The U.S. Geological Survey released a special FAQ on April 2, 2014 about recent news reports on earthquakes, animal movement and more in Yellowstone. Among other things, they said:

With the latest swarms, earthquakes are elevated, but are not unusual for Yellowstone.

Follow the links below to learn more about the recent geologic activity in Yellowstone National Park.

Why is Yellowstone so geologically active?

Are 4.8-magnitude earthquakes common in Yellowstone?

Do recent swarms of earthquakes in Yellowstone mean the supervolcano is about to erupt?

What about that video of bison fleeing Yellowstone?

If the supervolcano were to erupt, would we have warning? 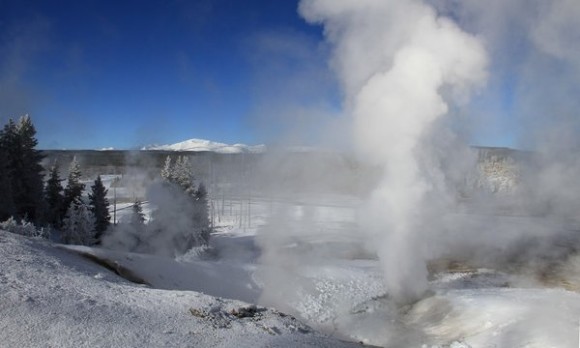 File photo of Norris Geyser Basin, near the epicenter of the magnitude 4.8 earthquake that rattled Yellowstone National Park in Wyoming on March 30, 2014. Photo by Jim Peaco / National Park Service / November 22, 2013. Via LA Times.

Why is Yellowstone so geologically active? Yellowstone National Park sits on top of one of the most geologically active areas in North America, a hotspot in Earth’s crust. Yellowstone’s unique and beautiful landscape was largely formed through three powerful volcanic eruptions that occurred 2.1 million, 1.3 million, and 640,000 years ago. These eruptions left behind enormous calderas, which are bowl-shaped depressions that form when the mouth of a volcano collapses.

This area of volcanic activity under the park is often referred to as the Yellowstone hotspot or Yellowstone supervolcano. Today, geysers, hot springs, mudpots and fumaroles (gas vents) dot the landscape in Yellowstone.

Small earthquakes (less than 3.0 in magnitude) happen frequently in Yellowstone National Park, and these can be caused both by hot magma moving under the ground and tectonic movements of Earth’s crust along fault lines. You can view current activity reports from the Yellowstone Volcano Observatory’s monitoring website here.

This histogram shows the last 20 years of earthquakes in north-central Yellowstone. Note the recent uptick in earthquakes (332 earthquakes in March 2014), and note other similar upticks in the past. Histogram via USGS.

Are 4.8-magnitude earthquakes common in Yellowstone The 4.8-magnitude earthquake that rattled the park on March 20, 2014, is a normal and frequent event on a geologic timescale, but not on a human timescale. An earthquake of this magnitude has not been observed in the park since the early 1980s. The epicenter of the quake was about 4 miles north–northeast of the Norris Geyser Basin. A preliminary analysis of the event suggests that the earthquake was of a tectonic origin and consisted mostly of strike-slip motion, according to a new report released on April 3, 2014 by the Yellowstone Volcano Observatory. 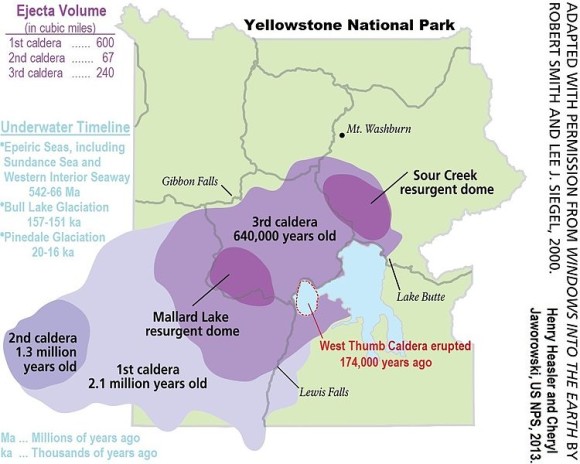 Do recent swarms of earthquakes in Yellowstone mean the supervolcano is about to erupt? No. The recent spate of seismic activity does not indicate the Yellowstone supervolcano is about to erupt. Even though another extremely large eruption is theoretically possible, an event of such magnitude is not likely to occur for several thousands of years, at least.

Some researchers such as Ilya Bindeman at the University of Oregon even think that the Yellowstone hotspot is in a dying out cycle versus a ramping up cycle.

That’s good, because such an event would obliterate the area surrounding the eruption within a radius of hundreds of kilometers, and cover the rest of the United States and Canada with multiple inches of ash, shutting down agriculture and causing global climate cooling for as long as a decade.

… any animal migrations are typical for this time of year. Most of the recent videos on the internet that show running bison were filmed weeks (at least) before [the March 30 4.8-magnitude] earthquake.

In the video below, Yellowstone Park spokesman Al Nash discusses animals migrations and other topics.

If the supervolcano were to erupt, would we have warning? Yes. Yellowstone has an advanced volcano monitoring program in place. Any signs of unusual activity would be reported in a timely manner to ensure public safety.

Bottom line: A total of 332 earthquakes struck Yellowstone National Park during March 2014. The largest event was a 4.8-magnitude quake that occurred on March 30. The U.S. Geological Survey says is an “elevated” amount of seismic activity for Yellowstone, but it is not “unusual.” Plus a word on the Yellowstone supervolcano, bison supposedly fleeing the park and more.

What causes volcanos to produce lightning?