Unlike volcanoes that emerge from collision zones between tectonic plates, hotspot volcanoes form in the middle of the plates.

Scientists at the University of California, Berkeley, have detected previously unknown channels of slow-moving seismic waves in Earth’s upper mantle, a discovery that helps explain “hotspot volcanoes” that give birth to island chains such as Hawaii and Tahiti.

Unlike volcanoes that emerge from collision zones between tectonic plates, hotspot volcanoes form in the middle of the plates. The prevalent theory for how a mid-plate volcano forms is that a single upwelling of hot, buoyant rock rises vertically as a plume from deep within Earth’s mantle – the layer found between the planet’s crust and core – and supplies the heat to feed volcanic eruptions. 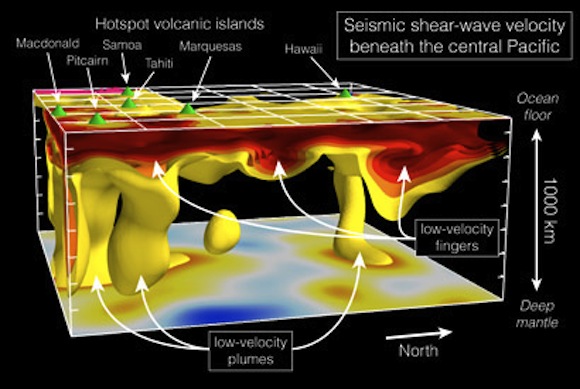 This 3D view of the top 1,000 kilometers of Earth’s mantle beneath the central Pacific shows the relationship between seismically-slow “plumes” and channels imaged in the UC Berkeley study. Green cones on the ocean floor mark islands associated with “hotspot” volcanoes, such as Hawaii and Tahiti. Image courtesy of Berkeley Seismological Laboratory, UC Berkeley

However, some hotspot volcano chains are not easily explained by this simple model, suggesting that a more complex interaction between plumes and the upper mantle is at play, said the study authors.

The newfound channels of slow-moving seismic waves, described in a paper published today (Thursday, Sept. 5), in Science Express, provide an important piece of the puzzle in the formation of these hotspot volcanoes and other observations of unusually high heat flow from the ocean floor.

The formation of volcanoes at the edges of plates is closely tied to the movement of tectonic plates, which are created as hot magma pushes up through fissures in mid-ocean ridges and solidifies. As the plates move away from the ridges, they cool, harden and get heavier, eventually sinking back down into the mantle at subduction zones.

But scientists have noticed large swaths of the seafloor that are significantly warmer than expected from this tectonic plate-cooling model. It had been suggested that the plumes responsible for hotspot volcanism could also play a role in explaining these observations, but it was not entirely clear how.

“We needed a clearer picture of where the extra heat is coming from and how it behaves in the upper mantle,” said the study’s senior author, Barbara Romanowicz, UC Berkeley professor of earth and planetary sciences and a researcher at the Berkeley Seismological Laboratory. “Our new finding helps bridge the gap between processes deep in the mantle and phenomenon observed on the earth’s surface, such as hotspots.” 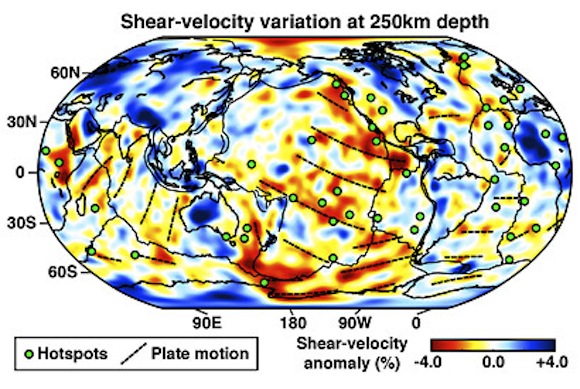 The researchers utilized a new technique that takes waveform data from earthquakes around the world, and then analyzed the individual “wiggles” in the seismograms to create a computer model of Earth’s interior. The technology is comparable to a CT scan.

The model revealed channels – dubbed “low-velocity fingers” by the researchers – where seismic waves traveled unusually slowly. The fingers stretched out in bands measuring about 600 miles wide and 1,200 miles apart, and moved at depths of 120-220 miles below the seafloor.

Seismic waves typically travel at speeds of 2.5 to 3 miles per second at these depths, but the channels exhibited a 4 percent slowdown in average seismic velocity.

“We know that seismic velocity is influenced by temperature, and we estimate that the slowdown we’re seeing could represent a temperature increase of up to 200 degrees Celsius,” said study lead author Scott French, UC Berkeley graduate student in earth and planetary sciences.

The formation of channels, similar to those revealed in the computer model, has been theoretically suggested to affect plumes in Earth’s mantle, but it has never before been imaged on a global scale. The fingers are also observed to align with the motion of the overlying tectonic plate, further evidence of “channeling” of plume material, the researchers said.

“We believe that plumes contribute to the generation of hotspots and high heat flow, accompanied by complex interactions with the shallow upper mantle,” said French. “The exact nature of those interactions will need further study, but we now have a clearer picture that can help us understand the ‘plumbing’ of Earth’s mantle responsible for hotspot volcano islands like Tahiti, Reunion and Samoa.”

Vedran Lekic, a graduate student in Romanowicz’s laboratory at the time of this research and now an assistant professor of geology at the University of Maryland, co-authored this study.