Yellowstone National Park is above a hotspot below the crust of the Earth. Its hot springs and geysers make it a popular tourist attraction. It is also riddled with fault lines …

Looks like it occurred north, outside the modern caldera boundary. Remember, the Yellowstone area is riddled with faults.

The U.S. Geological Survey gives details of the quake as follows:

Read more about the March 30 earthquake in Yellowstone from USGS

From 2011: Underground plume of Yellowstone supervolcano bigger than thought

The biggest Yellowstone earthquake in recent times occurred on August 17, 1959. It was a 7.3-magnitude quake that caused over 28 fatalities and left $11 million in damage to highways and timber. The slide blocked the flow of the Madison River resulting in the creation of Quake Lake. Effects of the earthquake were also felt in Idaho and Wyoming.

The 1959 quake was the strongest and deadliest earthquake to hit Montana since the 1935-36 Helena earthquakes left 4 people dead. 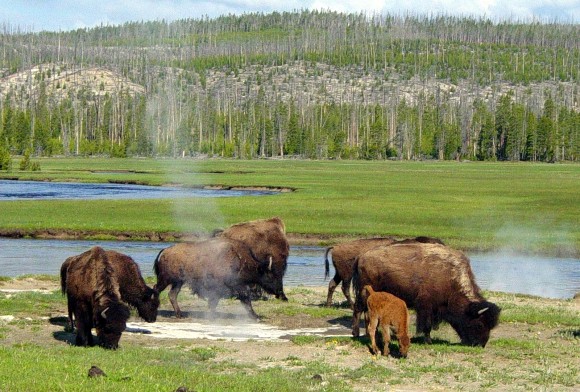 The landscape of Yellowstone National Park is a manifestation of a hotspot below the crust of the Earth. Its hot springs and geysers make it among the most popular tourist attractions in the U.S. It is also riddled with fault lines, and earthquakes do occur. Image via Wikipedia.

Yellowstone National Park is riddled with faults, and thus earthquakes are common there. Image via USGS

Read about the earthquake history of Wyoming from USGS