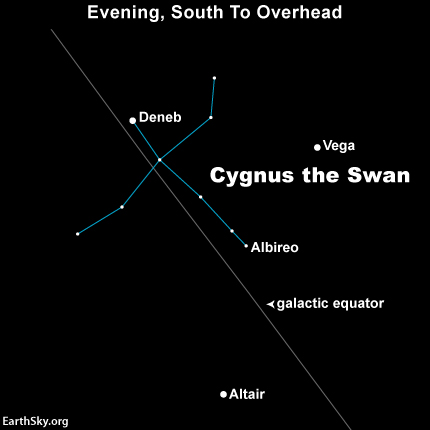 Tonight, use the Summer Triangle and the constellation Cygnus the Swan to locate the galactic equator – the great circle on the celestial sphere that bisects the glowing band of stars that we call the Milky Way. Sure, it’s autumn here in the Northern Hemisphere, but the three brilliant stars that make up the Summer Triangle still shine in our sky. You’ll find them way up high on October evenings.

View the scene from the comfort of a reclining lawn chair, with your feet pointing southward. Although every star that we see with the unaided eye is a member of our Milky Way galaxy, sometimes the term “Milky Way” refers to the edgewise view of the galactic disk, where the combined glow of myriads of far-off suns congregates into a beautiful archway lighting up the great vault of the sky. A dark sky is best for observing the Milky Way.

As seen from mid-northern latitudes, the stars Deneb and Vega hang high overhead at nightfall and early evening. Vega, the brightest Summer Triangle star, shines to the west (or right) of Deneb, and Altair, the second brightest, is found roughly halfway between your southern horizon and straight overhead. 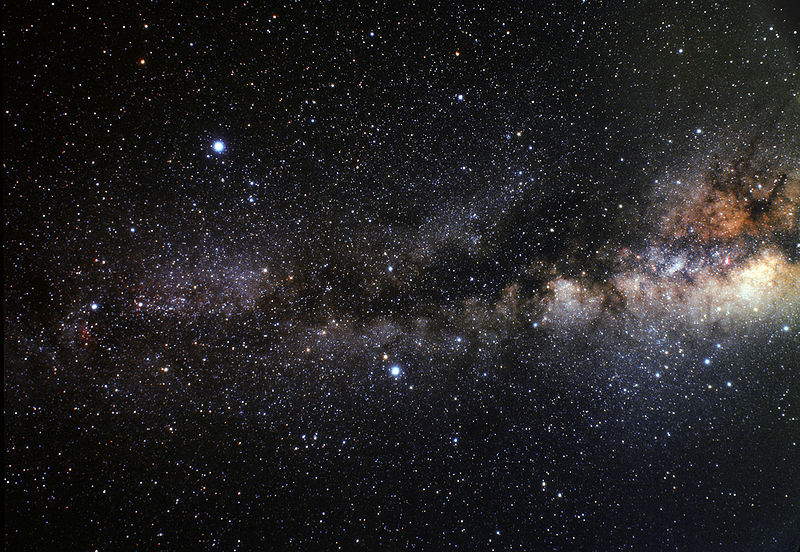 The Summer Triangle (left side of image) and Milky Way. Altair shines a bit below center, while fainter Deneb is found at left center and the brightest star of the Summer Triangle, Vega, at upper left of center. Image via NASA/ESA.

As evening deepens, look for a modestly-bright star to pop out between Altair and Vega. That’s Albireo, which depicts the Swan’s eye or beak. The line from Albireo to Deneb shows you the underside of the Swan’s body from head to tail. Three stars cross the body near Deneb to form what is known as the Northern Cross. Go one star farther out on each side of the Northern Cross to finish off the Swan’s wings. 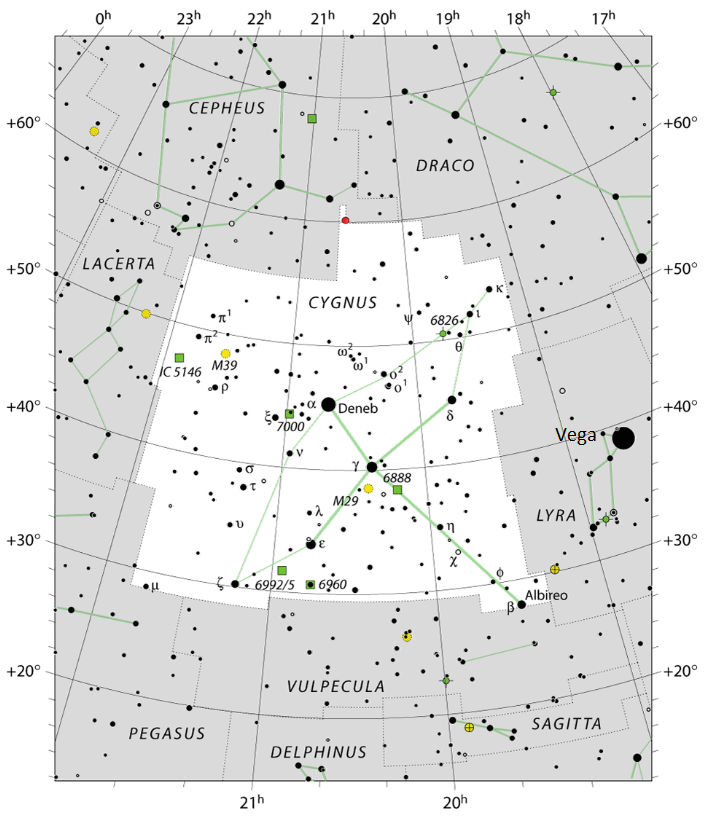 Sky chart of the constellation Cygnus the Swan via IAU.

Extend the Albireo-to-Deneb line in either direction to soar along the galactic equator (plane). Through binoculars, you’ll see that star clouds, star clusters and nebulae abound on this great galactic boulevard! Locate the Summer Triangle first, then the star Albireo, and you’ve got what it takes to find the glowing band of stars that we call the Milky Way.

Bottom line: You can use the Summer Triangle – and the constellation Cygnus the Swan – to locate the edgewise disk of our Milky Way galaxy.