On December 10 and 11, 2019, look in the sunset direction – close to the sunset point on the horizon, not long after the sun goes down – for the the conjunction of 2 bright planets, Venus and Saturn. Some will also spot Jupiter nearby.

Maybe you saw bright Jupiter near even-brighter Venus in the west after sunset in late November? The Venus-Saturn conjunction happens this week. It won’t be as dramatic as Venus-Jupiter, but it’ll still be very cool. Start watching tonight, as soon as the sky begins to darken. You’ll see a very bright light in the west after sunset. That’ll be Venus. Saturn will be the fainter light – still as bright as the brightest stars – nearby. They’ll pop out near the sunset point, as bright twilight ebbs toward darkness.

The actual conjunction happens on December 10 or 11, 2019, depending on your time zone. More about that below.

Dazzling Venus – brightest planet and third-brightest object in the sky after the sun and moon – will pop out first, around 30 minutes (or sooner) after the sun goes down. Saturn – shining as brilliantly as a 1st-magnitude star, or one of the brightest stars in our sky – will join up with Venus perhaps 15 minutes or so after Venus’ initial appearance.

Saturn, although respectably bright, pales next to Venus, which outshines Saturn by more than 60 times.

See another bright object up there, even closer to the sunset? That’ll be Jupiter. 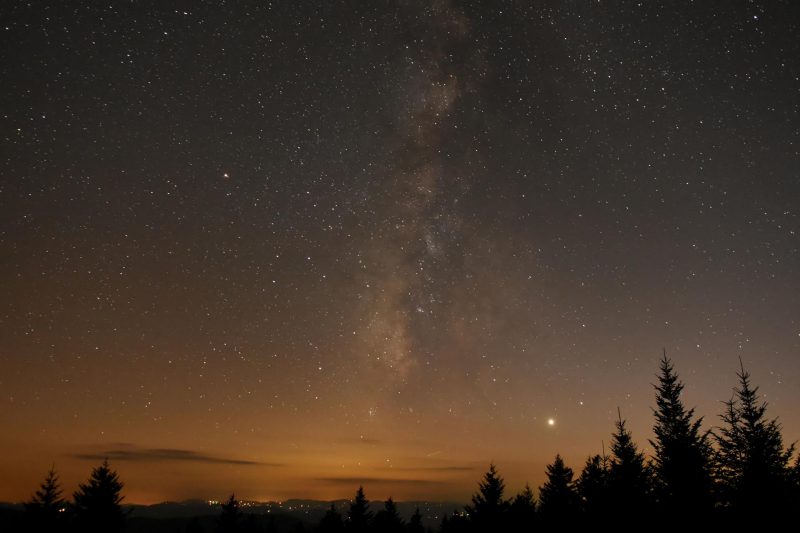 The last time Venus and Saturn had a conjunction in the evening sky was on October 30, 2016. David Wilson of Weaverville, North Carolina, wrote: “We drove up on the Blue Ridge Parkway tonight to get some shots of the Venus-Saturn conjunction. We stopped at the ‘highest point’ on the parkway …”

Two planets are said to be in conjunction when they are north and south of one another on the sky’s dome. At conjunction, Venus sweeps 1.8 degrees south of Saturn. For reference, your index finger at arm’s length spans about 2 degrees of sky.

We like the trusty Observer’s Handbook from the Royal Astronomical Society of Canada; it gives the time of the Venus-Saturn conjunction as December 11, 2019, at 04:00 UTC.

Jean Meeus – another excellent source that I often use – also gives the same date for the Venus-Saturn conjunction as December 11, 2019, but at 05:00 UTC.

The helpful website In-the-Sky.org gives the date and time of the conjunction as December 11 at 04:41 UTC. You can see that all of these sources indicate the same general time, but that they are rounding the times slightly differently. The exact time isn’t as important as simply getting out there after sunset, and looking on either December 10 or 11.

You’ll want to catch this stunning planetary conjunction at dusk or nightfall (60 to 90 minutes after sunset) because these worlds will follow the sun beneath the horizon by early evening (about two hours after sundown).

If you have binoculars, aim them at Venus to spot Saturn all the sooner after sunset.

To optimize your sky watching pleasure, find an unobstructed horizon in the direction of sunset. Better yet, find a hill or balcony that’ll enable you to peek a little farther beyond the horizon. Venus and Saturn will set at nearly the same time for the next day or two, about two hours after sundown from virtually everywhere worldwide.

After their conjunction, Venus will continue its climb upward away from the sunset. It’ll be the stunning “evening star” in early 2020. Meanwhile, Saturn will fall sunward, following Jupiter into the sunset. Jupiter will disappear around mid-December. Saturn will fade into the sunset glare by late December 2019 or early January 2020. 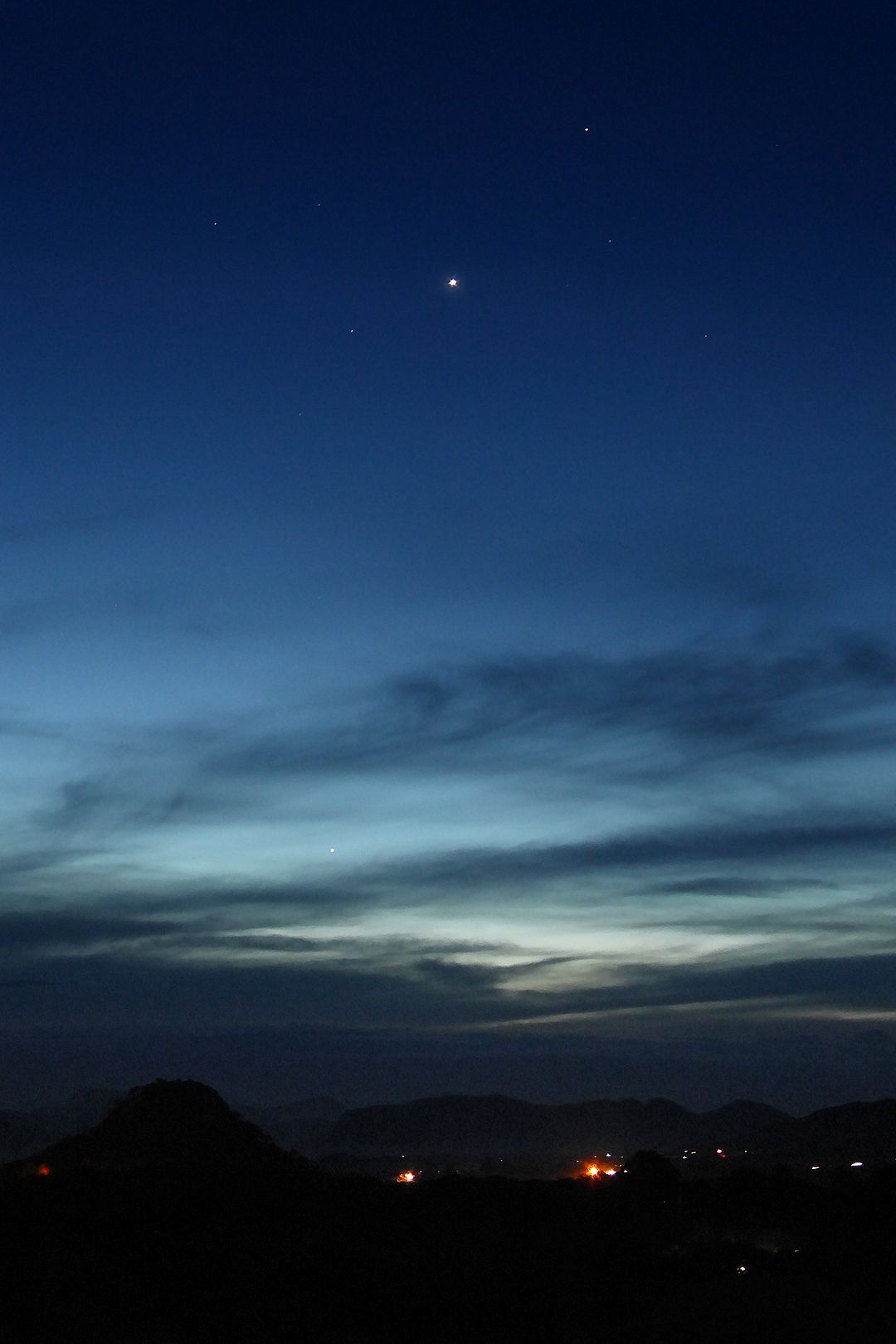 View at EarthSky Community Photos. | Peter Lowenstein in Mutare, Zimbabwe, caught Venus and Saturn – the 2 bright objects near the top of this photo – on December 7, 2019. Notice the bright “star” below them, nearly buried in clouds. That is Jupiter. These worlds are oriented differently from the Southern Hemisphere than from the Northern Hemisphere. For the exact view from your location, try Stellarium. And don’t worry. If you just look west after sunset, you’ll know these worlds when you see them. That’s because Venus will be the brightest thing up there!

Venus and Saturn appear close together on the sky’s dome because they reside on nearly the same line of sight, as viewed from Earth.

People sometimes ask us how an inferior planet can have a conjunction with a superior planet in Earth’s sky. If a diagram is worth a thousand words, then perhaps the answer can be divined below.

Bird’s-eye view from the north side of the solar system as Venus and Saturn are in conjunction (from the vantage point of Earth) on December 11, 2019, at 04:00 UTC. Look closely and you can see that the Earth, Venus and Saturn pretty much make a straight line in space. Click here for planet symbols. Diagram via EarthView.

Bottom line: Around December 9, 10 and 11, 2019, look in the sunset direction – close to the sunset point on the horizon, not long after the sun goes down – for the the conjunction of 2 bright planets, Venus and Saturn. You may also spot Jupiter nearby.